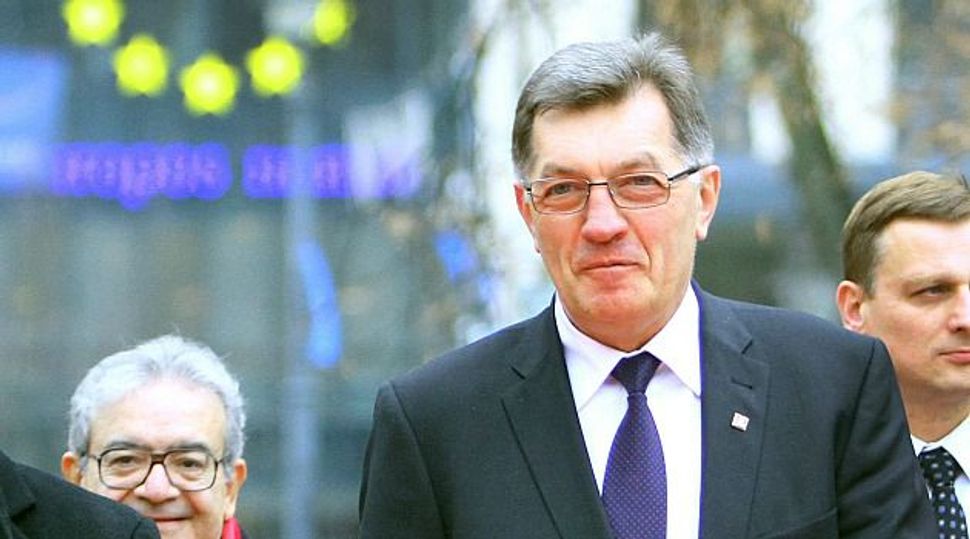 Lithuanian Prime Minister Algirdas Butkevicius has condemned a lawmaker for suggesting Jews are cheap and ?are just looking to take from Lithuania.? Image by getty images

Lithuania’s prime minister condemned a lawmaker for suggesting Jews are cheap and “are just looking to take from Lithuania.”

“I judge this statement to be very negative and it doesn’t represent the party’s position,” Prime Minister Algirdas Butkevicius said Dec. 23, according to the news site Delfi.lt. A spokesperson for Butkevicius’ Social Democratic Party of Lithuania said the party “does not tolerate any forms of anti-Semitism.”

The prime minister was responding to a comment made earlier this week by fellow party member Bronius Bradauskas, who told the BNS news agency that, “Jews were just looking to take money.”

Bradauskas made the statement in connection to a government proposal to make extra pension payments to about 200 Lithuanian Righteous among the Nations, non-Jews recognized by the Yad Vashem Holocaust museum in Jerusalem for having risked their lives to rescue Jews during the Holocaust.

“I do not see why the Lithuanian state should pay,” Bradauskas, chairman of the Lithuanian Parliamentary Committee on Budget and Finance, told BNS. “It would be quite logical if we turned to Israel, and that it should pay. But no, the Jews do not want to pay, they are just looking to take from Lithuania.”

Lithuania had a Jewish population of 250,000 in 1939 but 95 percent of its Jews were murdered during the Holocaust by Nazi soldiers and Lithuanian collaborators. Today Lithuania has some 5,000 Jews, according to the European Jewish Congress.