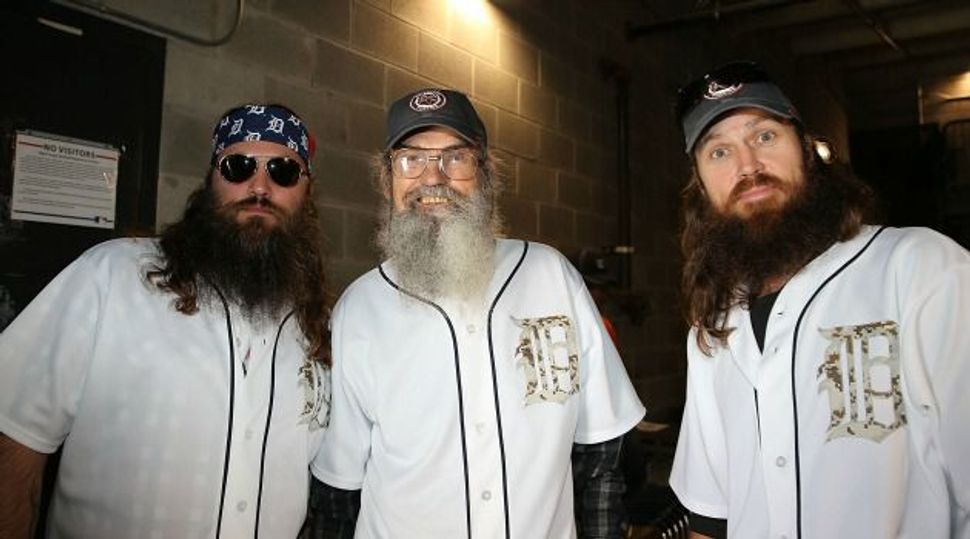 He?s Back: Phil Robertson, right, has been restored to his starring role in the ?Duck Dynasty? reality TV show after a furor over his anti-gay remarks. Image by getty images

Cable network A&E said on Friday it was bringing back family patriarch Phil Robertson to the hit reality show “Duck Dynasty” after fans protested his suspension over anti-gay remarks and big-name corporate sponsors stuck by the series.

Robertson’s remarks to GQ magazine and his subsequent suspension by A&E sparked a nationwide debate over tolerance and religion, with conservative politicians and fans saying that Robertson’s beliefs were consistent with the Bible.

“As a global media content company, A&E Networks’ core values are centered around creativity, inclusion and mutual respect,” A&E said in a statement released late Friday in the midst of the holiday season.

“We believe it is a privilege for our brands to be invited into people’s homes and we operate with a strong sense of integrity and deep commitment to these principles.”

It was a quick reversal for the network that is jointly owned by Walt Disney Co. and privately held Hearst Corp, but the move was not entirely surprising, given the financial commitment at stake. The controversy was also seen as a test for the entertainment industry’s appeal to audiences in the heartland of America.

“Duck Dynasty” ranks among the most-watched cable television programs and averages about 8 million viewers per episode. Its fifth season is slated to begin on Jan. 15. The show’s fourth season debuted in August to 11.8 million viewers, a record for a cable nonfiction series, according to the network.

“Duck Dynasty” sponsors and retailers selling branded merchandise, such as Target and Walmart, also stuck with the show, although they did not pick sides in the public debate.

“Duck Dynasty” merchandise, which ranges from sporting goods and apparel to camouflage furniture, has brought in some $400 million in sales, according to Forbes magazine.

By lifting Robertson’s suspension after nine days, A&E assures that the 67-year-old will not miss production of the series’ sixth season and staves off any potential mutiny by the remainder of the family if he were to be kept off the show.

Robertson, the leader of the backwater Louisiana clan on the reality show about hunting, fishing and domestic squabbles, was put on indefinite “hiatus” on Dec. 18 by A&E for his remarks to GQ characterizing homosexuality as sinful behavior.

A&E said it would also air a national public service campaign “promoting unity, tolerance and acceptance among all people” on all its affiliated networks, which include the History Channel and Lifetime among others.

Although Robertson never apologized for his comments, his family did say they regretted his “coarse language,” which included graphic descriptions of male and female anatomy.

The family also said it would not continue with the show without its patriarch and was in talks with the network.

A&E said at the time it was disappointed after reading Robertson’s remarks, which it added were his personal views and did not reflect those of the network.

The network’s quick move to suspend Robertson hours after the GQ story appeared online also stood in contrast to fellow cable networks The Food Network and MSNBC, which both waited days before recently parting with Southern food doyen Paula Deen and actor Alec Baldwin, respectively, after they both admitted to using slurs.

Vocal opposition from “Duck Dynasty” fans was swift in coming and an online petition started by Faith Driven Consumer, a group that connects Christian shoppers with faith-compatible companies, gained more than 260,000 signatures since Robertson’s suspension began.

Robertson’s suspension also elicited strong reaction from across the political spectrum, with conservative politicians defending Robertson as a victim of political correctness.

Early in the controversy, Louisiana Governor Bobby Jindal lent his support to Robertson and his family, who turned their animal-call company Duck Commander into a hunting industry leader and helped boost tourism to the state.

“I’m glad to hear that A&E came to its senses & recognized that tolerance of religious views is more important than political correctness,” he said on Twitter.

“Back on,” Republican U.S. Senator Ted Cruz tweeted in reference to Robertson.

“Phil’s decision to push vile and extreme stereotypes is a stain on A&E and his sponsors, who now need to reexamine their ties to someone with such public disdain for LGBT people and families,” GLAAD said in a statement at the time.

GLAAD could not be reached for comment on Friday.