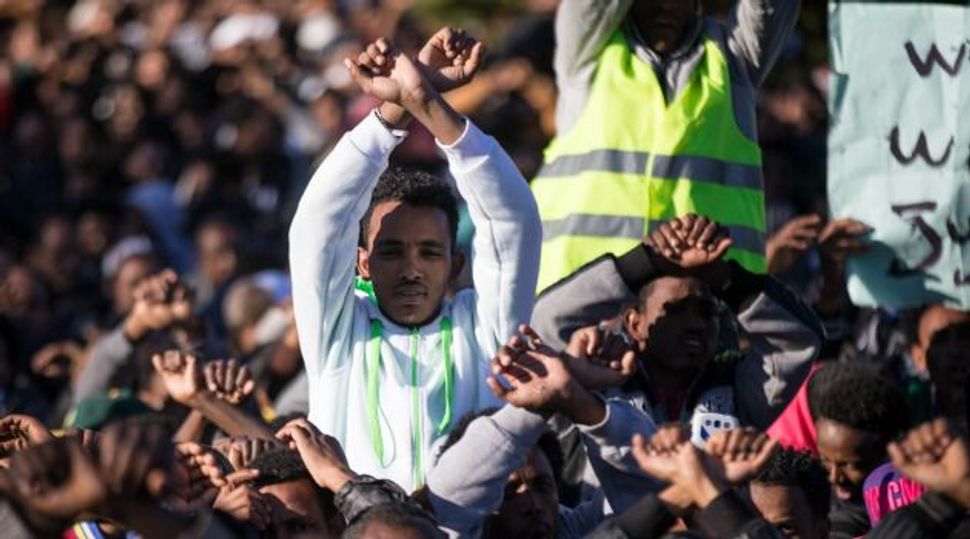 More than 10,000 African migrants demonstrated outside Israel’s parliament on Wednesday, extending protests into a fourth consecutive day in a quest for recognition as refugees and freedom to work legally without fear of incarceration.

Their presence in a Jewish state that took in survivors of the Nazi Holocaust of World War Two has stoked an emotional political debate over whether they should be allowed to stay as a humane gesture.

“I want to say to them that they should not fear us, we are human beings too,” a tall, slim 25-year-old man from Eritrea, who gave his name only as Mulugieta, told Reuters.

Some 60,000 migrants, largely from Eritrea and Sudan, have entered Israel without authorisation across a once-porous border with Egypt since 2006. Many hope for asylum and say they cannot return home without risking their lives.

Israel says most are illegal job-seekers. It passed a law three weeks ago allowing for indefinite detention of migrants without valid visas while it pursues efforts to persuade them to leave or enlist other countries to take them in.

Mulugieta said he fled Eritrea six years ago, fearing that his criticism of its rulers had put him in danger.

“We asked for shelter, we do not deserve jail,” read one of many large banners in a park opposite the Israeli Knesset as the crowd demonstrated against Israel’s refusal to grant them refugee status.

“Being black is not a crime,” another sign said.

Many of the migrants live in impoverished neighbourhoods of Tel Aviv, Israel’s commercial centre, and work as cleaners and dish-washers. They have gone on strike at restaurants as part of a protest campaign that included a large demonstration in the Mediterranean seaside city on Sunday.

Prime Minister Benjamin Netanyahu said this week he views the African influx – since stemmed by an Israeli fence along the Egyptian frontier – as a threat to Israel’s Jewish social fabric.

Miri Regev, a member of Netanyahu’s right-wing Likud party, said it was time to send the migrants, whom she dubbed “infiltrators”, away.

It was the fourth straight day of protests by the migrants, who on Monday marched to foreign embassies in Tel Aviv to appeal for international intervention.

Protester Mulugieta said: “Everyone has come across the border, we escaped the war but they fear us (here) … we are not the enemy of the Israeli public.”

Dozens of migrants have been summoned for detention at a specially-built centre in Israel’s Negev desert, where they are allowed to leave for brief periods during the day but must return at nightfall, activists said.

The United Nations High Commissioner for Refugees has said Israel’s detention policy towards the migrants caused “hardship and suffering” and was not in line with a 1951 world treaty on the treatment of refugees.

Outside parliament, several left-wing legislators addressed the crowd. Erel Margalit of the opposition Labour Party apologised to the protesters after Parliament Speaker Yuli Edelstein refused to allow a delegation in to meet lawmakers.

David Grossman, a writer identified with the Israeli left-wing, told the protesters that the Jewish state’s treatment of the migrants was shameful.

“I look at you now … I feel embarrassed and ashamed,” Grossman said in English. “Israel has not created this problem, but there is a problem now (and) we have to struggle with it and to solve it in the most humane way.”