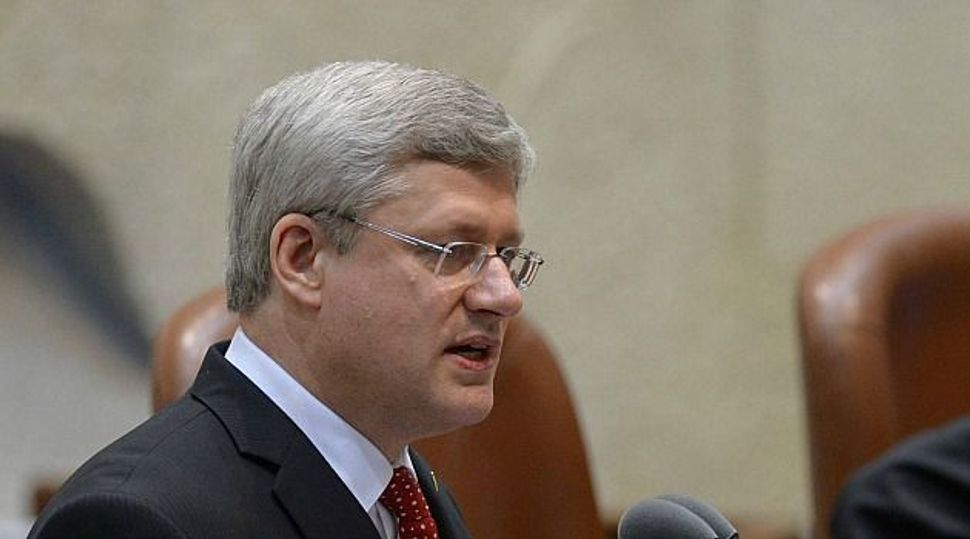 Canada supports Israel “because it is the right thing to do,” Canadian Prime Minister Stephen Harper said in a speech to the Knesset.

Harper on Monday became the first Canadian prime minister to address Israeli lawmakers in the parliament as part of his first visit since taking office in 2006. The visitors’ gallery was filled with Canadian-Israelis.

“Canada supports Israel fundamentally because it is right to do so,” Harper said, speaking in English and French, Canada’s two national languages. He also expressed support for a Palestinian state.

“A Palestinian state will come, and one thing that will make it come is when the regimes that bankroll terrorism realize that the path to peace is accommodation, not violence,” Harper said.

Two Arab lawmakers, Ahmad Tibi and Hanna Swaid, interrupted Harper several times in the middle of his speech before walking out of the chamber. Their exit was applauded by lawmakers and the visitors’ gallery.

Harper said Jews have been in Canada for more than 250 years and that “350,000 Canadians share with you their heritage.”

“They are immensely proud of what was accomplished here,” he said.

Earlier in the day, Harper traveled to Ramallah to meet with Palestinian Authority President Mahmoud Abbas, where he announced $66 million in economic aid to the Palestinians to help bring “peace and stability” to the area.

“Canada looks forward to a bright future for all Palestinians, one in which security and prosperity are enjoyed in a viable and democratic Palestinian state,” Harper said. Harper arrived Sunday night and was greeted by an honor guard and words of praise from Israeli Prime Minister Benjamin Netanyahu.

“When it comes to anti-Semitism, you have stood up unabashedly at the side of Israel and the entire Jewish people, I think at the side of decency and fairness to everyone: Jews and non-Jews alike,” Netanyahu said. “And when it comes to Iran’s repeated calls for Israel’s annihilation and its unrelenting development of nuclear weapons, you and Canada have stood unflinchingly on the right side of history.

“And finally, when it comes to peace, you recognize that a genuine peace, a lasting peace, must be based on mutual recognition and sound security arrangements on the ground. I think in all this and in so many other things, you have shown courage, clarity and conviction.”

Just days before Harper’s visit to Israel, the Canadian Foreign Ministry issued an updated policy paper on Israel and the Palestinians stating that Canada believes Israeli settlements are illegal and an obstacle to peace, Haaretz reported.