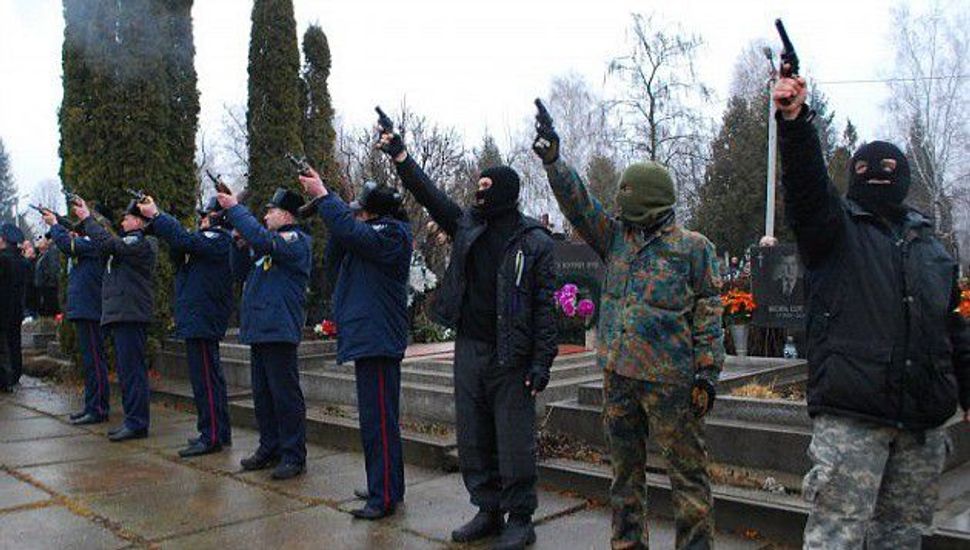 Scary Sight:Far right wing gunmen and Ukrainian policemen at the funeral of Alexander Scherbanyuk. Image by COURTESY OF VYACHESLAV A. LIKHACHEV

“There is concern in the Russian Jewish community over what is beginning to manifest itself in times of social and political instability as in recent attacks on Jews and Jewish targets in Ukraine,” Andrei Glotser, spokesperson of the Federation of Jewish Communities of Russia, told the Interfax news agency earlier this week.

The federation is led by Berel Lazar, a chief rabbi of Russia and senior figure in the Chabad movement. Ukraine’s former President Viktor Yanukovych and his government were ousted last month in a revolution which erupted over his perceived pro-Russian policies.

Russian President Vladimir Putin and other Kremlin officials warned of anti-Semitism in Ukraine following several violent anti-Semitic attacks — including a stabbing and the torching of a synagogue — that occurred during the four-month-long revolution in which far-right nationalists played a prominent role.

None of the perpetrators has been caught.

The most recent incident occurred on March 14. A Jewish couple, Zalman Hetzklovich and his wife, escaped a gang of eight men with clubs in a central Kiev street and took cover in a synagogue, according to Rabbi Hillel Cohen, a witness.

Cohen was himself assaulted in central Kiev on March 13 by several men, sustaining minor injuries in his leg and back, he said.

Yaakov Dov Bleich, a chief rabbi of Ukraine, said earlier this month that the attacks may be provocations by pro-Russian forces seeking to delegitimize the Ukrainian revolution.

And the Vaad Jewish group of Ukraine and other Jewish Ukrainian leaders disputed the notion that anti-Semitism was at all on the rise in Ukraine.

In an open letter to Putin this month the Vaad leaders wrote: “Your certainty about the growth of anti-Semitism in Ukraine, which you expressed at your press conference, also does not correspond to the actual facts.”