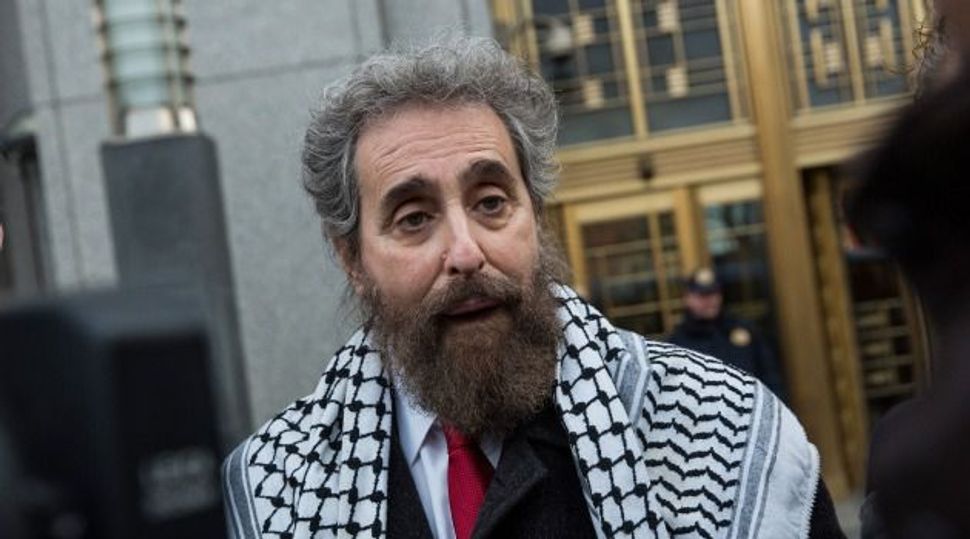 Guilty as Charged: Defense lawyer Stanley Cohen discusses case of Suleiman Abu Ghaith, who was convicted of participating in an al Qaeda conspiracy to kill Americans. Image by getty images

Suleiman Abu Ghaith, a son-in-law of Osama bin Laden, was found guilty of terrorism-related charges on Wednesday following a three-week trial that offered unusually vivid details of the former al Qaeda leader’s actions in the days after the Sept. 11, 2001 attacks.

Abu Ghaith, 48, a Kuwait-born Muslim cleric, faces life in prison after a federal court jury in New York convicted him of conspiring to kill Americans, conspiring to provide material support for terrorists, and providing such support.

Jurors took just over one day to reach a verdict in a courtroom that is blocks from the site of the World Trade Center destroyed in the hijacked plane attacks nearly 13 years ago.

Abu Ghaith’s court-appointed lawyer, Stanley Cohen, said there were several issues he would raise on appeal. They include U.S. District Judge Lewis Kaplan’s decision to bar testimony from Pakistan-born Khalid Sheikh Mohammed, the man the U.S. government accuses of masterminding the attacks that killed nearly 3,000 people in New York, Washington and Pennsylvania.

“He was stoic, he was at ease,” Cohen said of Abu Ghaith’s reaction to the verdict. “I think he feels that it was impossible under the circumstances to receive a fair trial.”

The judge scheduled Sept. 8 for sentencing.

Prosecutors had accused Abu Ghaith, one of the highest-profile bin Laden advisers to face trial in a U.S. civilian court, of acting as an al Qaeda mouthpiece and using videotapes of his inflammatory rhetoric to recruit new fighters.

They also said Abu Ghaith knew in advance of an attempt to detonate a shoe bomb aboard an airplane by Briton Richard Reid in December 2001, citing in part an October 2001 video in which he warned Americans that the “storm of airplanes will not stop.”

Lawyers for Abu Ghaith said the prosecution was based on “ugly words and bad associations,” rather than actual evidence that the defendant knew of or joined plots against Americans.

U.S. Attorney General Eric Holder, in a statement after the verdict, said it bolstered the argument that militants should be tried on terrorism charges in civilian courts, rather than as combatants in military commissions.

That sentiment was echoed by Karen Greenberg, the director of Fordham Law School’s Center on National Security, who attended the trial.

“The federal courts are robust and can handle the numerous challenges that terror trials pose, including witnesses taking the stand and classified material,” she said on Wednesday.

In a surprising move, Abu Ghaith testified in his own defense, denying he helped plot al Qaeda attacks and claiming he never became a formal member of the group.

He described meeting bin Laden inside a cave in Afghanistan hours after the Sept. 11 attacks.

“We are the ones who did this,” bin Laden told Abu Ghaith, according to the defendant’s testimony. Abu Ghaith said he learned of the attacks in news reports.

He said that night, bin Laden asked him what he believed the United States’ response would be.

Abu Ghaith said he told bin Laden that the United States would not rest until it had accomplished two goals: killing bin Laden and overthrowing the Taliban government in Afghanistan.

“You’re being too pessimistic,” bin Laden replied, according to Abu Ghaith.

The Taliban was in fact soon ousted by the U.S. and its allies and bin Laden, a founder of al Qaeda, was killed by U.S. forces in May 2011 at a hideout in Pakistan.

On the day after seeing bin Laden and discussing the attacks, Abu Ghaith testified, he joined a meeting that included al Qaeda’s inner circle: bin Laden and two of his closest lieutenants, Egyptians Ayman al-Zawahiri and Mohammed Atef.

A few hours later, he recorded the first of several videos at bin Laden’s request, declaring that the Sept. 11 attacks were a “natural” result of the U.S. policy toward Muslims worldwide.

But he denied that his intention was to speak or recruit for al Qaeda. Instead, he claimed he was trying to exhort all Muslims to stand up against oppression.

Abu Ghaith married bin Laden’s daughter Fatima years after the Sept. 11 attacks, a fact that was kept from the jury.

Abu Ghaith’s lawyers repeatedly sought to introduce testimony from accused plotter Khalid Sheikh Mohammed stating that Abu Ghaith had no involvement in al Qaeda’s military planning. The judge rejected those requests, finding that Mohammed, now a prisoner in the U.S. military base at Guantanamo Bay, Cuba, did not appear to have personal knowledge to back up his claims.

Defense lawyer Cohen also faulted Kaplan for telling the jury on Wednesday morning that he might keep them deliberating past day’s end if they had not reached a verdict by then, calling it “coercive.”

“It sends a message that in the court’s mind this is a no-brainer,” Cohen said.

As in several other terrorism trials held in U.S. civilian courts, the jury remained anonymous.