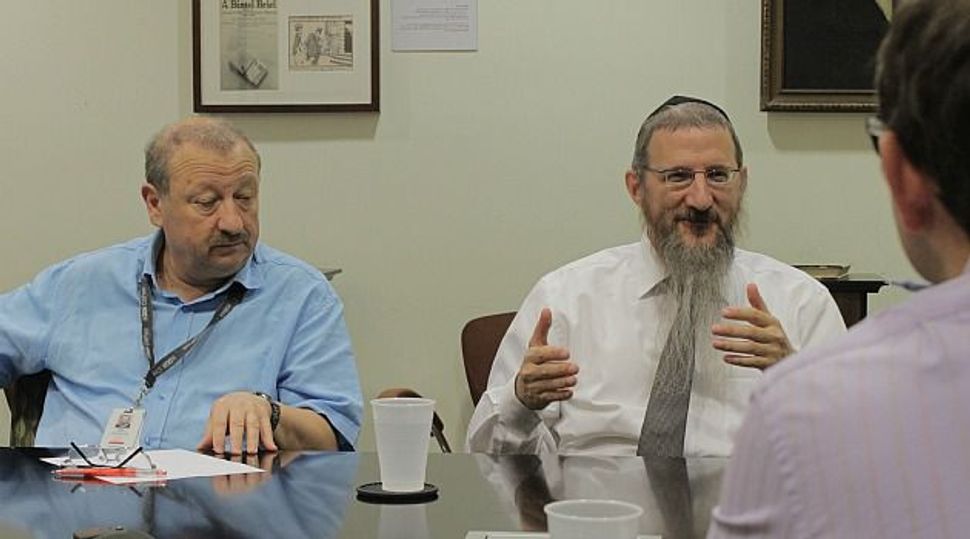 “The Jewish community should not be the one sending messages to President Barack Obama about his policy or to President Putin or to any other leader,” Lazar said Monday during a joint interview with JTA and The Jewish Chronicle of London. “I think it’s the wrong attitude.”

Lazar, Chabad’s top figure in Russia, was responding to a question about a March 5 letter to the Russian president from the Association of Jewish Communities and Organizations of Ukraine, or VAAD, following the incursion of Russian troops into the the Crimean peninsula.

“Your policy of inciting separatism and crude pressure placed on Ukraine threatens us and all Ukrainian people,” the letter said.

Lazar criticized the Ukrainians for involving themselves in issues that don’t directly concern the Jewish community. At the same time, Lazar said he was concerned about anti-Semitism in Ukraine under its interim government, which was one of the reasons Putin gave as justification for the troop mobilization.

Many Ukrainian Jews and several Ukrainian Jewish leaders supported the revolution that ousted former President Viktor Yanukovych despite the prominent role played in the uprising by leaders of the ultranationalist Svoboda party.

Svoboda’s leader and other prominent party figures have a history of making anti-Semitic statements. Other Ukrainian Jews saw the revolution as dangerous.

Several anti-Semitic attacks occurred during the unrest, including two stabbings in Kiev, a few assaults of religious Jews, an act of vandalism at a Crimean synagogue and the attempted torching of another synagogue. Anti-Semitic violence is typically rare in Ukraine.

On March 3, Putin said the revolution was being led by “anti-Semites and neo-Nazis on a rampage.”

No suspects have been arrested in connection with the attacks, but Rabbi Yaakov Dov Bleich, a chief Ukrainian rabbi, said pro-Russian provocateurs may have staged them.

Asked about the possibility of provocations, Lazar told JTA he was uncertain, but added: “In the last 15 years I’ve never seen in Russia anything similar. And sadly, in Ukraine and in certain parts of Ukraine especially, there is a history of anti-Semitism.”

Lazar suggested Ukrainian Jewish leaders did not feel free to decry anti-Semitic acts there. But Vyacheslav Likhachev, a VAAD spokesperson, said it was Lazar who could not speak freely.

“When Lazar speaks, it is as a person holding an official position, that of a religious leader in contemporary Russia and as such, it is impossible for him or any other person in his position to express views that do not align with the Kremlin’s official line and propaganda,” Likhachev said.