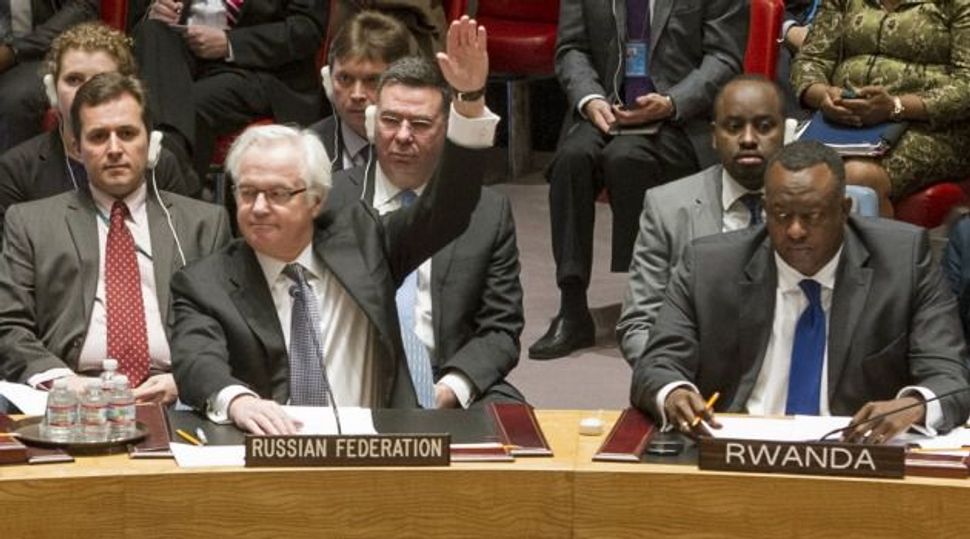 Israel abstained from the U.S.-led bid to isolate Russia at the United Nations in the wake of its takeover of Crimea, distancing itself from the U.S. policy of backing Ukraine in the conflict with its more-powerful neighbor.

The non-binding resolution passed in the General Assembly Thursday 100-11, with 58 abstentions, calls on member states “to desist and refrain from actions aimed at the partial or total disruption of the national unity and territorial integrity of Ukraine, including any attempts to modify Ukraine’s borders through the threat or use of force or other unlawful means.”

It also declares a referendum held earlier this month to validate last month’s Russian takeover to have “no validity.” Among those approving the resolution were leading U.S. allies, including Canada and Poland.

Israel has maintained a low profile throughout the crisis.

Several Western diplomats, however, said Russia led an aggressive lobbying campaign against the resolution, adding that many states which sympathize with Ukraine abstained or chose not to be present for fear of angering Russia.

Israel, Iran, Serbia and several former Soviet republics in Central Asia like Tajikistan and Kyrgyzstan were among those that did not take part in the vote.

Ukraine’s former Russian-backed president, Viktor Yanukovich, was ousted last month after a crackdown on demonstrations in Kiev that left dozens dead. That prompted Moscow to seize the Black Sea peninsula.

U.S. Ambassador Samantha Power said all countries supported the idea of self-determination but that Russia had used its military to forcibly annex Crimea.

“Coercion cannot be the means by which a self determines,” she said. “The chaos that would ensue is not a world that any of us can afford. It is a dangerous world.”

Power added that the resolution showed “that borders are not mere suggestions.”

Kaha Imnadze, the ambassador of Georgia, said Moscow was repeating what it had done in his own country’s 2008 war with Russia over the Georgian breakaway enclave of South Ossetia.

“What happened in Ukraine reminds us of what we saw in Georgia in 2008, when Russia seized Georgia’s Abkhazia and Tskhinvali regions,” he said. “Six years after the war, 20 percent of my country remains under illegal Russian occupation.”

Only 10 other countries stood with Russia in voting against the resolution. The group of 11 states, which the senior Western diplomat described as the “dirty dozen”, included critics of Western nations like Belarus, Bolivia, Cuba, North Korea, Nicaragua, Sudan, Syria, Venezuela and Zimbabwe.

Both Nicaragua and Bolivia railed against what they described as Western attempts at “regime change”, which they said was meant to undermine democratically elected governments.

China, which since 2011 joined Russia in vetoing three Security Council resolutions that condemned Syria and threatened it with sanctions, abstained, as it did in the Security Council vote on Ukraine earlier this month.