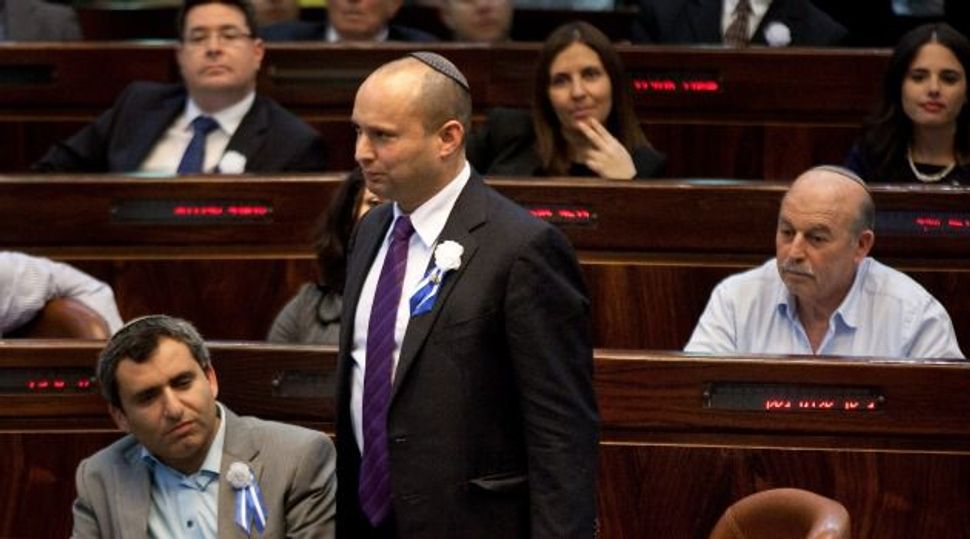 A senior Israeli minister has urged Prime Minister Benjamin Netanyahu to annex a swathe of Jewish settlements in the occupied West Bank, saying peace talks with the Palestinians were dead.

The U.S.-backed negotiations came close to collapse last week amidst mutual recrimination and although the two sides are seeking to overcome the crisis, Netanyahu has already started to impose punitive sanctions on the Palestinians.

Economy Minister Naftali Bennett, who is head of the ultra-nationalist Jewish Home party, wrote to the prime minister late on Wednesday saying Israel should extend its sovereign territory to a number of major settlement blocs.

Mega settlements, such as Ma’ale Adumin, are built on land seized in the 1967 war – territory the Palestinians want for their future state. Successive governments have said the blocs, deemed illegal under international law, should remain part of Israel in any negotiated deal with the Palestinians.

“It is clear that the current process has exhausted itself and that we are entering a new era,” said Bennett, urging Netanyahu to annex a number of large settlements.

“These are areas which enjoy a wide national consensus, have security implications and have historical significance for the State of Israel.”

A high-tech entrepreneur and a former settler leader, Bennett has called in the past for annexing a much larger part of the West Bank and is a long-time opponent of any deal that would grant the Palestinians a state.

Netanyahu made no comment on Bennett’s request, but is likely to face strident calls from within his own rightist Likud party to annex the blocs, home to an estimated 350,000 Israelis, if the latest peace talks implode.

However, such a move would almost certainly set off a storm of international condemnation, and Israel’s chief negotiator, Tzipi Livni, said Bennett was acting like a “provocative child” who needed parental restraint.

“If you want to go totally crazy, keep it up until we can no longer make a deal and lose everything we hold dear,” Livni, who serves as justice minister, wrote on her Facebook page.

Israel has already annexed part of its 1967 gains: the Golan Heights that border Syria, and East Jerusalem, which the Palestinians want as their capital. Neither move has been recognised internationally.

Settlements have been a constant source of aggravation between Israelis and Palestinians, with construction of new Jewish homes in the West Bank rising 123 percent year-on-year in 2013, a surge that coincided with the resumption of talks.

U.S. Secretary of State John Kerry said this week that the announcement last week of tenders for 700 new homes in East Jerusalem was the immediate cause of the negotiations crisis.

An official in Netanyahu’s office said Israel was “deeply disappointed” by Kerry’s remarks, signalling clear tensions in relations between the two allies.

The prime minister has pinned the blame on President Mahmoud Abbas for signing last week 15 international conventions, saying this broke his prior commitment not to take unilateral steps to bolster Palestinian statehood while talks were under way.

As initial punitive action, Netanyahu ordered on Wednesday a partial freeze on contacts with the Palestinians. However, the two negotiating teams were due to meet later on Thursday to seek a way to prolong their talks beyond April.