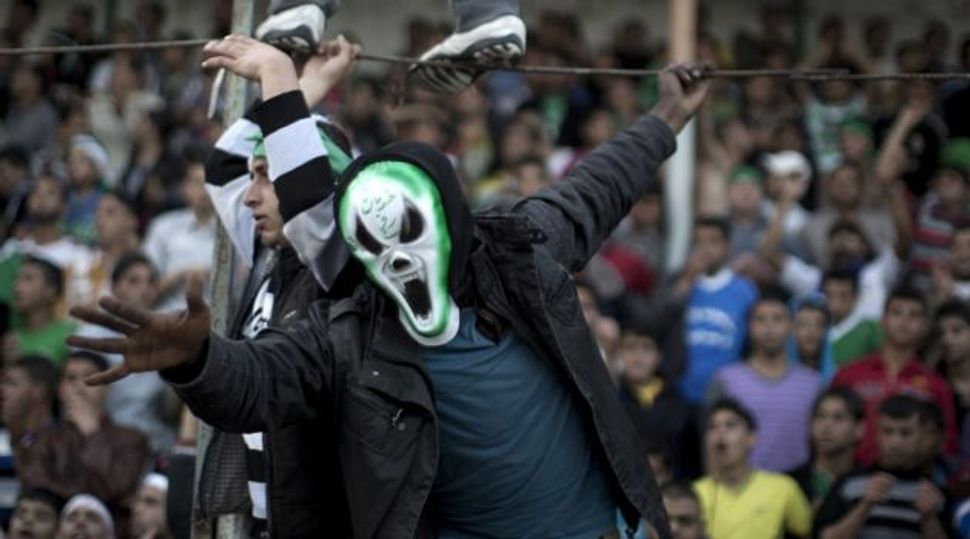 No End in Sight: A Gaza soccer fan celebrates his team’s win in a local tournament. The Palestinian enclave’s economy is worse than ever, choked by both Israel and Egypt. Image by getty images

(Reuters) — Life has never seemed so grim for the Mustafas, a family of seven cramped into a shabby two-room hovel in Gaza’s Jabalya refugee camp.

Seven years into an Israeli blockade and ten months into a crippling Egyptian one, Gaza’s economic growth has evaporated and unemployment soared to almost 40 percent by the end of 2013.

Opposition to the Hamas militant group which runs the Gaza Strip has led its neighbours to quarantine the enclave, shutting residents out of the struggling Mideast peace process and leaving them with plenty of parties to blame.

Living on U.N. handouts of rice, flour, canned meat and sunflower oil, with limited access to proper health care or clean water, families like the Mustafas – seemingly permanent refugees from ancestral lands now part of Israel – have no money, no jobs and no hope.

“We’re drowning… We feel like the whole world is on top of us. I turn on the television and I see the lifestyles on there, and I think, God help me leave this place,” said Tareq, 22.

The Mustafas often must pick up and move when rain floods their low-lying home – even on a sunny day, it’s lined with slick, smelly mildew. They stand in the dark, as 12-hour power cuts are now the norm throughout Gaza due to scant fuel.

“There’s no money for university or to get married. There’s not even enough to spend outside the house so we can escape a little. What kind of life is this?” Tareq asks.

Well over half of Gaza residents receive food from the United Nations, and the number is on the rise.

SHOCK TO THE POPULATION

More than 1.2 million of 1.8 million Gazans are refugees or their descendants who fled or were driven from land that became part of Israel in the war of its foundation in 1948.

As decades passed, the hand of occupation variously clenched or relaxed through wars and uprisings. Groups of tents slowly morphed into concrete ghettos – eight camps in total – where chances for change feel as narrow as the claustrophobic alleys.

“Gaza just seems to keep descending further into poverty and de-development of the economy,” said Scott Anderson, deputy director of operations at UNRWA, noting that the level of aid dependency faced by Gaza has few parallels in the world.

“In terms of economic shock to a population, probably somewhere like Sierra Leone might be the only place where people experience what the people of Gaza experience on a daily basis,” he told Reuters.

The crisis is pulling down the Strip’s most vulnerable, not just among its poor but also its sick. While basic health and economic indicators outstrip much of Africa, the rising level of aid dependency and sense of confinement takes a constant toll.

Eman Shannan, who runs a support group for cancer patients and writes about Gaza life, told Reuters that treatment for the disease has been rendered agonizing by travel curbs at the Egyptian border, a lack of medicine and careless officialdom.

“We are headed for disaster. Five new cases come into the office every day… Cancer doesn’t kill as much as the circumstances around us do. People can survive cancer, but not this,” said Shannan, herself a survivor.

There are 13,000 sufferers in the Strip and it is the second highest cause of death among Palestinians after heart disease.

Farha al-Fayyumi, a breast cancer patient from the Shuja’iya refugee camp in central Gaza complains that her teeth are throbbing – medicines used to offset the effects of her years of chemotherapy treatments are not available in Gaza.

Once the a main conduit for Gazans seeking treatment abroad, the crossing with neighbouring Egypt is now only open to people, including the sick, around two days each month. More and more, poverty is also staunching the flow.

“I haven’t been to Egypt for treatment for a year and a half. I can’t afford the travel expenses,” said al-Fayyoumi, a widow with eight children clad in a head-to-toe black niqab body cloak.

Treatment in Gaza was rendered harder by the 1993 Oslo interim peace accords because radiation chemotherapy, the two sides agreed, could have military applications. Only five practicing oncologists remain in Gaza, Shannan notes with gloom.

In northern Gaza’s green farmland, Mahmoud blames Hamas for much of the suffering.

“Do things ever change for their gang? If jobs open up, their people get them. They never suffer,” said the 23-year-old, who studied to be an electrician, then a truck driver, but found work as neither.

Mahmoud’s father, a farmer, sits in a flowing brown robe and rests his cane over his knees in a sunny enclosure next to his family house.

The 67-year-old remembers the orchards in his 180,000 square meters of land astride Israel’s border where olives, lemons and oranges once thrived in the area’s sweet well water.

Long since demolished by Israeli bulldozers amid cross-border violence in 2008, the orchard lives on only in his small garden. In it stands one of every type of tree he used to tend – a reminder of what he’s lost and of the steady erosion of land and livelihoods that Palestinians have endured over the decades.

Contamination of the aquifer means the family’s water is now brackish and undrinkable. Like many Gazans, they pay to have it filtered.

“When they closed the land, life ended.” he sighed. “We used to sell the fruit of our trees, now we buy from Egypt and Israel, but only when we can afford it.”

Grumbling at their leaders’ perceived incompetence is common among residents, but many said Gazans would remain behind Hamas because of its militancy.

“The whole world is against them. They’re not angels of course. They’ve made a lot of mistakes. But if they went ahead and recognised Israel, the people here would spit on them – their popularity would evaporate overnight,” said Zakaria Shurafa, a driver picking up his family’s ration of U.N. food aid at a busy distribution centre by the Beach Refugee camp.

“I don’t see any possibility of a revolt, though I’m sure Israel’s blockade is trying at that … it’s no use, we’re used to this kind of life.”

Mahmoud, the jobless youth, lamented how the economic deadlock was dragging down society, and his dreams of what he could accomplish.

“In conditions like this, you feel people’s hatred grow, their jealousy of each other grow. Young people take tramadol (drugs), there’s robbery. These things didn’t use to happen,” he said.

“When you’re young you think that, as an adult, you will be able to do more, that the world will become more open to you. But here, we found that as we grew older, our problems only grew.”