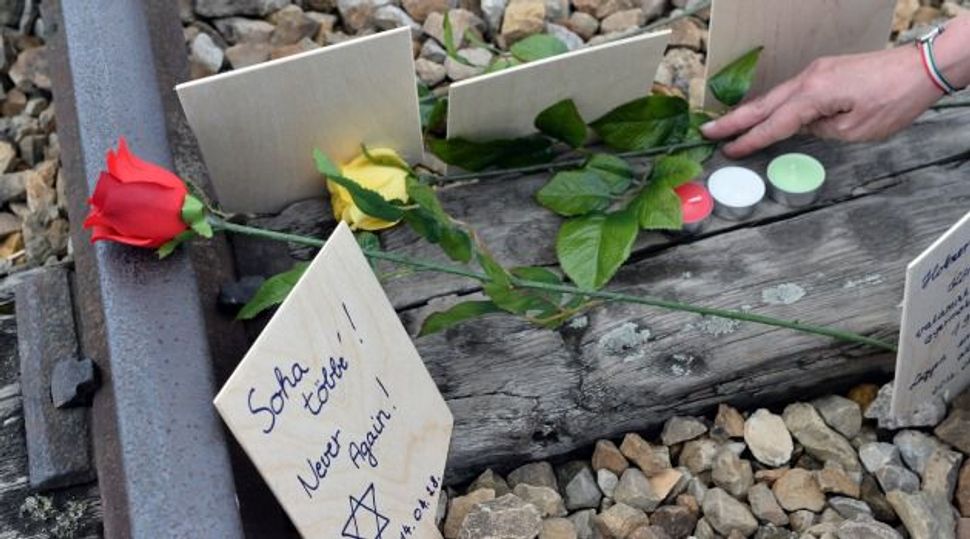 Some 10,000 young Jews from around the world participated in the 23rd March of the Living at Auschwitz.

The march took place on Monday, Holocaust Remembrance Day, at the former German Nazi concentration and extermination camp. A large group of Polish youth also marched from the gate bearing the “Arbeit macht frei” sign — meaning “working makes you free” — at Auschwitz I to Auschwitz II-Birkenau. It is the last March of the Living before the 70th anniversary of the liberation of Auschwitz, which falls on Jan. 27, 2015.

“Yom Hashoah is to remind everyone the terrible consequences of having hatred for another human being,” Piotr Kadlcik, president of the Union of Jewish Communities in Poland, told JTA. “We remember and we will never forget. The real responsibility is to combat the manipulation of history and to teach sensitivity and empathy to the next generations.”

This year, March organizers commemorated the 70th anniversary of annihilation of the Jews of Hungary. In 1944, the Germans deported from Hungary to Auschwitz about 430,000 Jews; more than 75 percent were murdered immediately in the gas chambers at Birkenau.

“The bottom line is that all people — especially young people, but not only them — get to know the historical facts, learn the history and draw conclusions from what happened in Europe 70 years ago,” said the head of the march, Aharon Tamir. “We see today in Europe and other places in the world growing phenomena such as Holocaust denial, racism and anti-Semitism.

Therefore, knowledge of the facts is so important, and that is why we want to get as many people as possible to see with their own eyes what has happened 70 years ago.”

This year’s march was led by a delegation of judges from the Supreme Court of Israel, including its chief justice, Asher Grunis. Janos Ader, the president of Hungary, joined the march in Birkenau.

The main ceremony took place near the monument at the former Auschwitz II-Birkenau, near the ruins of the gas chambers and crematoria II and III. In many places in the former camp, march participants left wooden plaques with the names of those murdered, symbolizing Jewish gravestones.

“The Holocaust was a crime not only against each murdered and against the Jewish people,” Piotr Cywinski, the director of Auschwitz Museum, told JTA. “It was a crime against all humanity.”

The March of the Living was first held in 1988 on Holocaust Remembrance Day, or Yom Hashoah, with approximately 1,500 participants. It has been held annually since 1996. The largest march took place in 2005, on the 60th anniversary of the liberation of Auschwitz, and had about 20,000 participants.