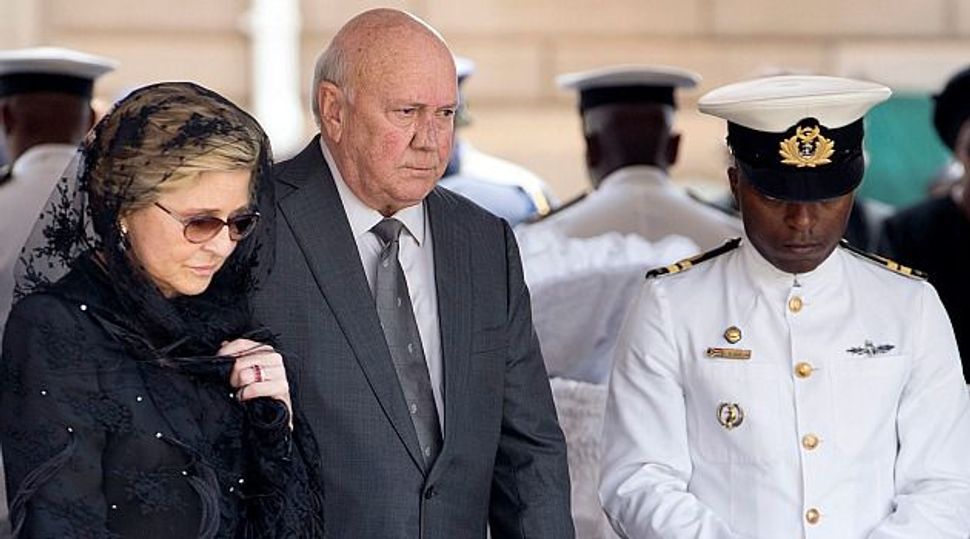 Beware Israel: F.W. de Klerk, the last white president of South Africa, pays homage to Nelson Mandela as his body lay in state. The ex-leader has warned Israelis that the country risks slipping towards ‘apartheid’-style oppression unless it makes peace with the Palestinians. Image by getty images

De Klerk, the last president in his country under apartheid, said in an interview on Israel’s Channel 2 this week that it was “unfair” to call Israel an apartheid state now.

In Israel to receive an honorary doctorate from the University of Haifa, de Klerk said Israel may have to contend with one state for two peoples.

“The test will be does everybody living then in such a unitary state, will everybody have full political rights?” he said. “Will everybody enjoy their full human rights? If they will, it’s not an apartheid state.

Critics of Israel’s treatment of the Palestinians have increasingly called Israel an apartheid state, comparing it to South Africa’s apartheid regime. U.S. Secretary of State John Kerry invoked the term in a conversation made public in April.

De Klerk, who won the 1993 Nobel Peace Prize with South Africa’s first black president, Nelson Mandela, urged Israeli leaders, “See the window of opportunity. Jump through it. It might close.”

Israel is different than apartheid South Africa, de Klerk stressed, since “you have Palestinians living in Israel with full political rights.” He also said, “You don’t have discriminatory laws against them, I mean not letting them swim on certain beaches or anything like that. I think it’s unfair to call Israel an apartheid state. If Kerry did so, I think he made a mistake.”