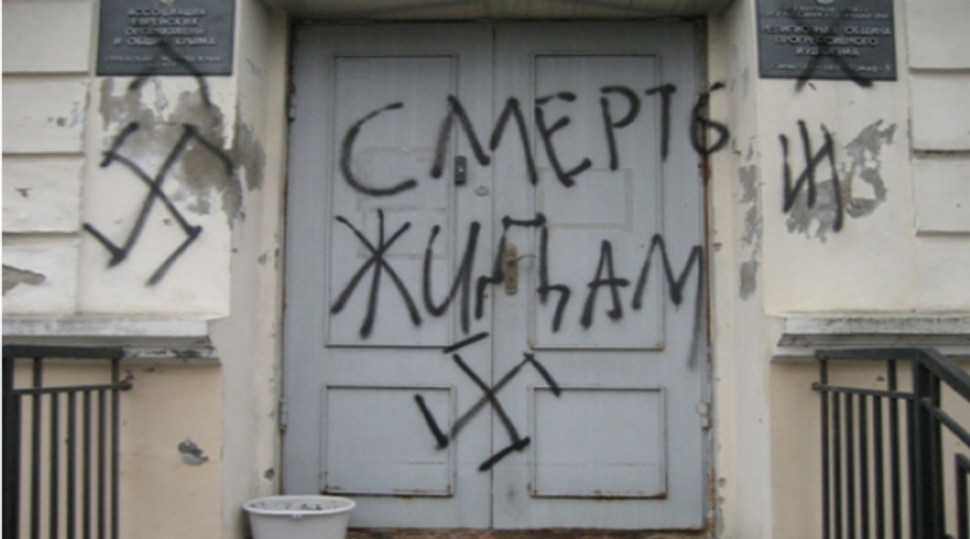 A Jewish organization from Crimea said its Ukrainian bank account had been emptied of funds following Russia’s annexation of the peninsula.

The disappearance of $3,157 from the account of the Jewish Ner Tamid association with Privatbank was reported Thursday by the ITAR-TASS news agency.

The money “had been withdrawn,” the news agency quoted Anatoli Guendine, head of the Reform Jewish group, as saying.

Russia annexed the Crimean Peninsula from Ukraine on March 18, in a move that Russia said was in accordance with the wishes of most residents and that was designed to protect them from persecution by anti-Russian activists in Ukraine.

But Ukrainian officials denounced the Russian move as a land-grab that violated international law and norms. Ukraine’s former president, Viktor Yanukovych, was ousted in February from power in a revolution that erupted five months earlier over his alleged corruption and perceived allegiance to Russia. But pro-Russian and pro-Yanukovych forces still control some locales in the country’s east. Ukraine’s government has called those forces terrorists.

Privatbank is owned by Igor Kolomoisky, a Ukrainian Jewish oligarch who was recently appointed to the government of the Dnipropetrovsk region and who strongly supports Ukraine in its dispute with Russia, including by funneling millions of dollars from his own fortune into arming the Ukrainian army.

“It seems Kolomoisky needs these moneys of my Jewish community to create a new battalion against so-called terrorists, meaning anyone who does not want to submit themselves to the laws” of the government in Kiev, Guendine said.

A Privatbank spokesman told the Russian news agency that he did not immediately have information on Ner Tamid’s account.