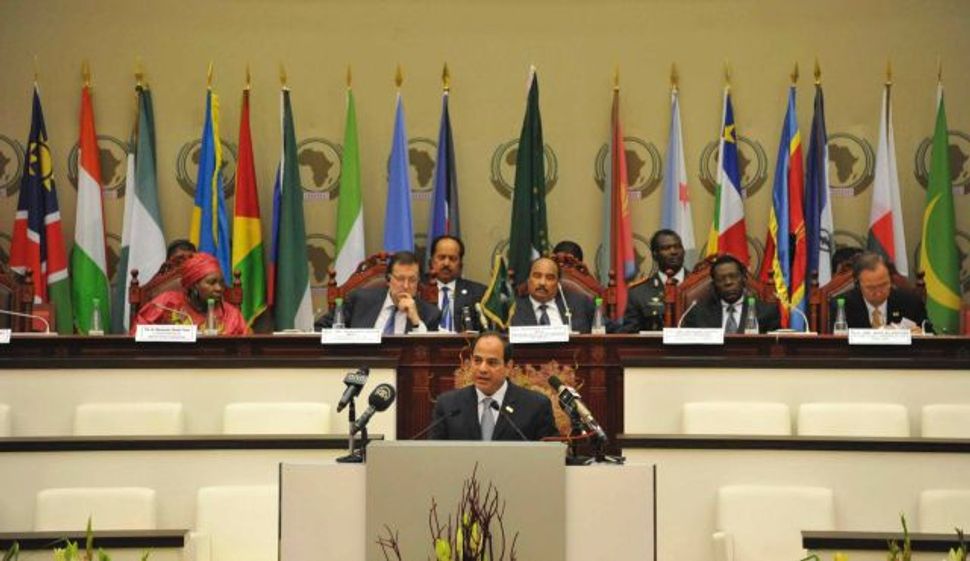 An American Jewish delegation at an African Union summit left after AU delegates objected to its presence.

The nine person delegation, which included Malcolm Hoenlein, the executive vice president of the Conference of Presidents of Major Jewish American Organizations, had been invited by summit organizers to attend this week’s events in Equatorial Guinea.

Hoenlein said Friday he considers the visit a success. He and the members of the delegation, who attended in individual capacities and did not collectively represent any organization, had between 12 and 15 meetings with African leaders on Wednesday, the day before the official summit launch.

“We were received across the board with presidents who have not before with us, who are anxious for closer ties to Israel, with the Jewish community,” Hoenlein, who said that it was the first time there was a Jewish presence at such a summit, told JTA.

On Thursday morning, the group settled in to watch the opening ceremonies, when the Egyptian delegation, noticing that some of the men wore kippahs, objected to their presence, calling them an Israeli delegation.

An AU organizer told Hoenlein of the objections, and Hoenlein told him that it would be “outrageous” to complain about an Israeli delegation, but that in any case, the people in his group were Americans.

The organizers returned to engaging with the Egyptian and South African delegations, Hoenlein said, but the group – which had planned to leave right after the opening ceremony – left two hours early.

“The behavior was unacceptable and we decided to leave,” he said. “It demonstrates again, whether we’re Israelis or Americans, it’s the Jewish part of us” that some people object to.

Hoenlein said that afterwards AU officials expressed their regret for the incident.