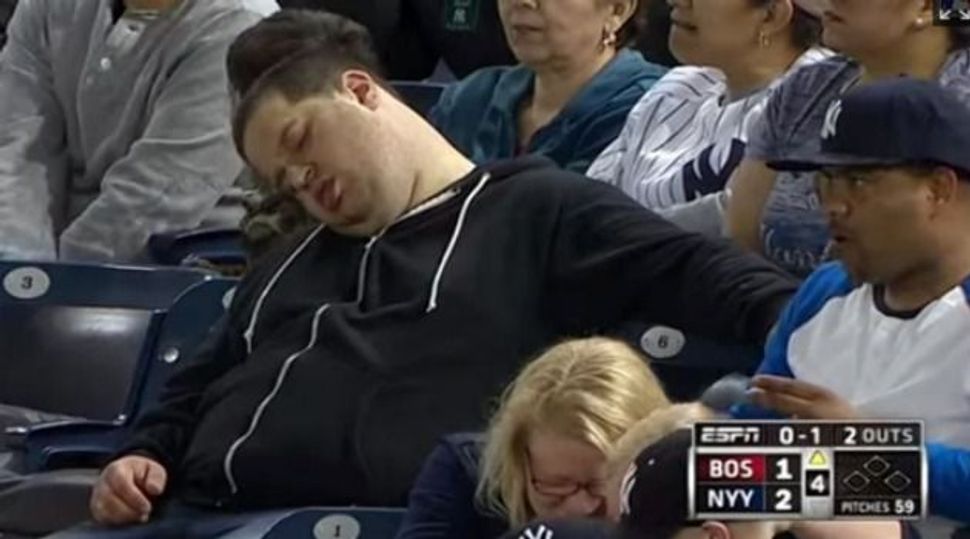 Andrew Rector said he was subjected to an “unending verbal crusade” from ESPN announcers Dan Shulman and John Kruk when cameras caught him sleeping at an April 13 game against the Boston Red Sox, according to a defamation lawsuit filed in New York state court.

The lawsuit, which was filed last week, claimed the announcers called Rector “fatty, unintelligent, stupid,” and seeks $10 million in damages.

In a Major League Baseball clip from the game, the announcers do not use those words to describe Rector, and it was unclear whether they did so later in the game.

Instead, Kruk and Shulman voice surprise that Rector could fall asleep in only the fourth inning, when the Yankees held a 2-1 lead. They also wonder if an alert man eating a chicken finger next to Rector is his “buddy” who likes Rector better when he sleeps.

“I’ll tell you what, though, how comfortable is that,” Kruk said. “He probably won’t have any neck problems tomorrow.”

Rector brought his lawsuit, which includes many typos, against Major League Baseball Advanced Media, ESPN, the Yankees and the announcers. He also accuses the defendants of intentional infliction of emotional distress.

“These unmitigated verbal onslaughts crossed the line between reporting on sport and abuse against the plaintiff,” the lawsuit said.

A spokeswoman for ESPN said in a statement, “The comments attributed to ESPN and our announcers were clearly not said in our telecast. The claims presented here are wholly without merit.”

Representatives for Major League Baseball and the Yankees were not immediately available for comment. Rector and his lawyer could not be reached for comment.

The lawsuit notes that “millions of people all over the world turn out or tune in” to watch the famous Yankees-Red Sox rivalry, but does not say why it was not enough to keep Rector awake.