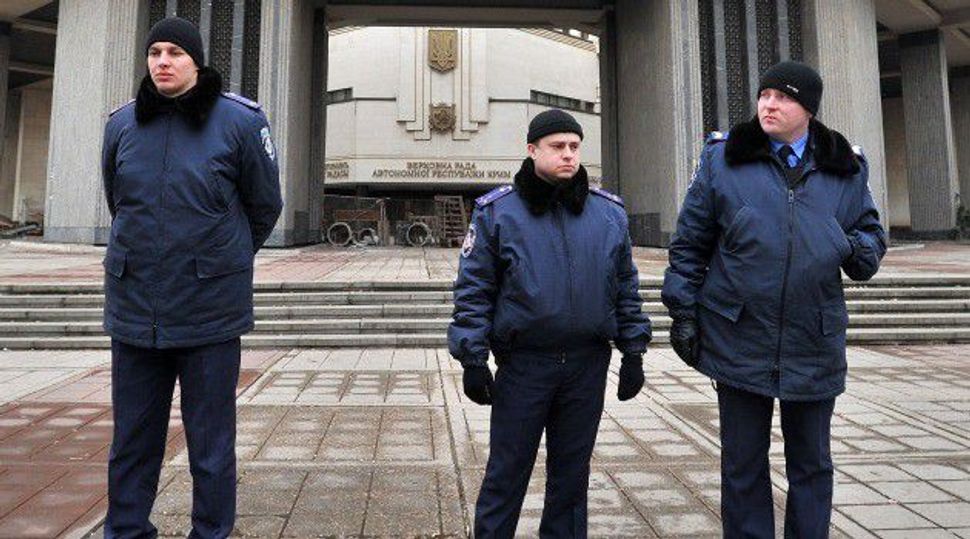 Uneasy Calm: Pro-Russian troops guard buildings in Crimea’s capital. The situation is calm in the breakaway province, but tensions remain between Jewish leaders over Russia’s annexation. Image by getty images

A prominent Chabad rabbi from Moscow denied accusations that he and several of his colleagues, including a chief rabbi of Russia, forced their way into a Crimean Reform synagogue’s offices.

Anatoly Gendin, chairman of the Ner Tamid Reform Synagogue in the Crimean capital of Simferopol, made the accusation in a Facebook post Friday titled “synagogue (temporarily) occupied.”

He described a visit Thursday to the offices of his synagogue by members of a delegation of rabbis organized by the Federation of Jewish Communities of Russia and led by Berel Lazar, one of Russia’s Orthodox chief rabbis and Chabad’s senior-most envoy to Russia.

Gendin, who confirmed the details of his written account to JTA, wrote that two of Lazar’s guards showed up at the synagogue and “pushed a local employee who answered the door and went on to explore the corridors and open space of the synagogue” and offices.

Rabbi Boruch Gorin, a senior associate of Lazar who participated in the visit, disputed the account by Gendin, who was not present when the delegation arrived.

“There was no confrontation,” Gorin said. “Mr. Gendin’s letter is strange to me. There was no issue of visiting the offices, this did not happen.”

Gorin, Lazar and approximately a dozen other rabbis from Europe and Israel visited Crimea Thursday to attend a commemoration ceremony that Lazar’s Federation co-organized in Sevastopol in memory of Holocaust victims.

During the visit to Ner Tamid, “the local employee was very courteous and so were we,” Gorin said. “If Rabbi Lazar ‘occupied’ the synagogue and center, then he has occupied all the synagogues and centers he has ever visited.”

Gendin said: “The doors are always open to the synagogue’s hall but looking around all the office facilities — that is bad form,” adding: “I don’t know the etiquette in Chabad in Moscow.”

The visit to Crimea, which Russia annexed from Ukraine in March despite an international outcry, came on the heels of a meeting the Federation had arranged on July 9 for the visiting rabbis in Moscow with Russian President Vladimir Putin. Relations between Reform and Orthodox Jewish leaders in Europe are often strained by politics and theological disagreements.

The Ner Tamid synagogue’s former rabbi, Misha Kapustin, harshly criticized the Russian government’s annexation of Crimea, which reportedly prompted Kapustin to leave Crimea. Gendin, however, was less critical of the Russian move and suggested Kapustin’s criticism was a mistake.