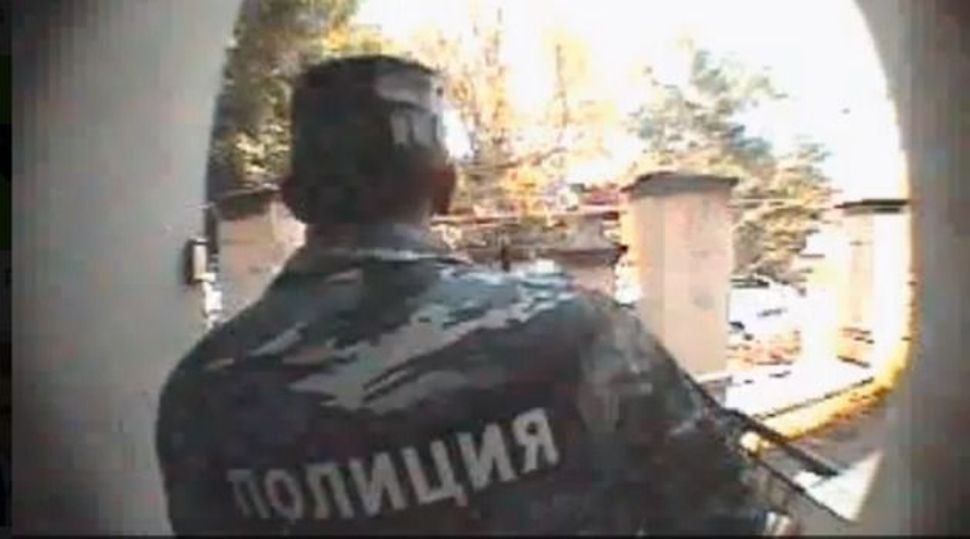 The chairman of the Ner Tamid Reform synagogue, Anatoliy Gendin, sharply criticized Lazar’s July 10 visit to his synagogue, suggesting that Lazar bullied his way inside the shul.

Gendin, who was not in the synagogue at the time, said in a Facebook post that Lazar forced his way into the synagogue offices and toured the building as though he was preparing to take it over.

The Moscow-based Lazar is the highest-ranking Chabad Lubavitch rabbi in the former Soviet Union and a close ally of Russian President Vladimir Putin.

Lazar’s spokesman, Boruch Gorin, who accompanied Lazar through Crimea, denied that Lazar forced his way into the synagogue offices.

Gorin told the Forward July 14 that Lazar was welcomed into the synagogue and that after quickly touring the sanctuary he asked if he could see the synagogue’s classrooms.

Gorin added that the armed policemen were an official escort that followed Lazar during his trip to Crimea.

The CCTV footage shows Lazar arriving at the synagogue around 2:00 pm, accompanied by about five Orthodox Jews, and four armed policemen, two of whom are from Russia’s riot police.

They stayed in the synagogue for about five minutes.