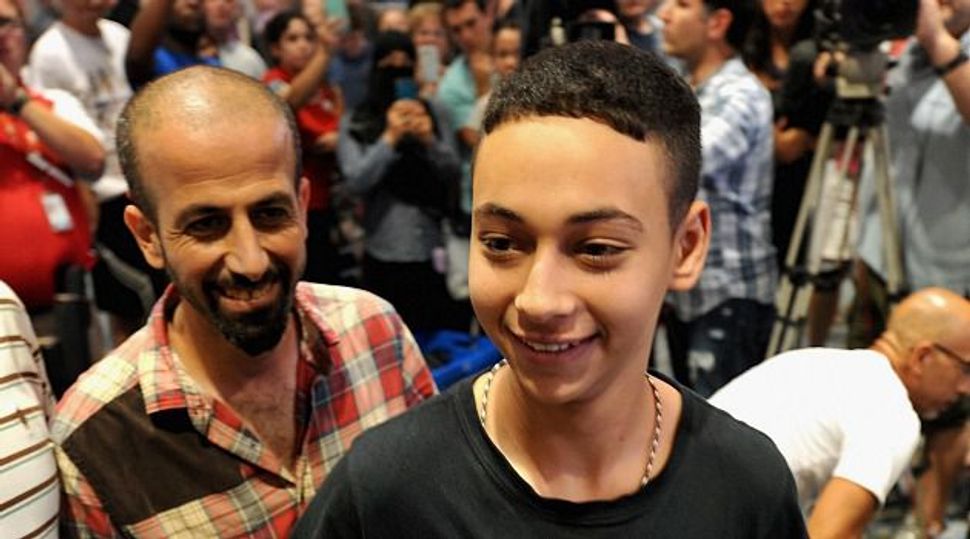 The Palestinian-American teen beaten by Israeli soldiers in an attack caught on video returned home to Florida after being released on bail and held under house arrest.

Tariq Abu Khdeir, 15, and his mother arrived in Tampa late on Wednesday night, where they reportedly were greeted by about 50 family members and supporters.

“I am only 15 but I will never think of freedom the same as I did two months ago,” he said at the airport, according to the Associated Press. “No child, whether they are Palestinian or Israeli, deserves to die.”

He reportedly said he was ready to play with his friends and go fishing.

Khdeir is a cousin of the Palestinian teen murdered July 2 in a killing blamed on Jewish extremists avenging the murders of three Jewish teens. He was on a summer vacation visiting family in eastern Jerusalem when the cousin’s murder occurred. He was one of six eastern Jerusalem teens arrested at a demonstration following the funeral.

In a video that garnered widespread attention internationally, a masked teen identified as Tariq is shown being pinned down by an Israeli border policeman while another office pummels him with his feet and kicks his head. Tariq is seen in photographs after his arrest with a bloody face, black eyes and a severely swollen lip.

The officer, who has not been named, was suspended for at least 15 days pending a hearing on whether charges will be brought, a statement from Israel’s Justice Ministry said last week.

Following a probe of the July 3 arrest of Khdeir, the ministry said that “apparent evidence was found supporting the guilt of the police officer suspected of severe violent crimes, committed after the arrest of the minor, and while the minor was handcuffed.”

The U.S. State Department at the time said that the U.S. was “profoundly troubled” by the beating and called for “a speedy, transparent and credible investigation and full accountability for any excessive use of force.”