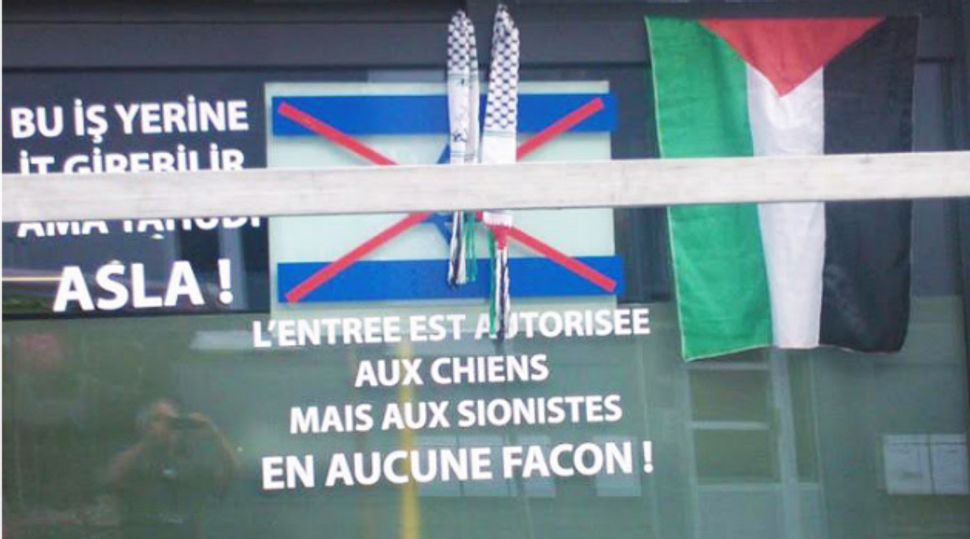 A Belgian watchdog on anti-Semitism complained to the mayor of a suburb of Liege against owners of a cafe whose window display featured a sign that said Jews were not allowed inside.

The Belgian League Against Anti-Semitism, or LBCA, filed the complaint Wednesday against the parties responsible for hanging a Turkish- and French-language sign at a cafe in Saint-Nicolas, a town located just east of the southern city of Liege.

The Turkish text reads: “Dogs are allowed in this establishment but Jews are not under any circumstances.” The French text replaces “Jews” with “Zionists.”

Following the LBCA complaint, the mayor of Saint-Nicolas, Jacques Heleven, dispatched police to the cafe, who had the sign removed and confirmed the LBCA report.

The window display also included a Palestinian flag, an Israeli flag crossed out with a red “X” sign, and a kaffieh, or Palestinian shawl, draped around it.

“LBCA will file in the coming hours a criminal complaint with the Liege prosecutor over the actions of those responsible for this violation of the July 30 law against racism and xenophobia of 1981,” LBCA said in a statement.

Last week, the Belgian Jewish newspaper Joods Actueel reported that a shop owner in Antwerp had refused to sell an Orthodox Jewish woman clothes “out of protest.” An employee confirmed that the shop had temporarily adopted a policy of not selling to Jews.

Western Europe has seen a significant rise in anti-Semitic hate speech and attacks – including against nine synagogues in France – since Israel launched its Operation Protective Edge against Hamas in Gaza on July 8, following multiple launching of rockets from Gaza into Israeli cities and towns.