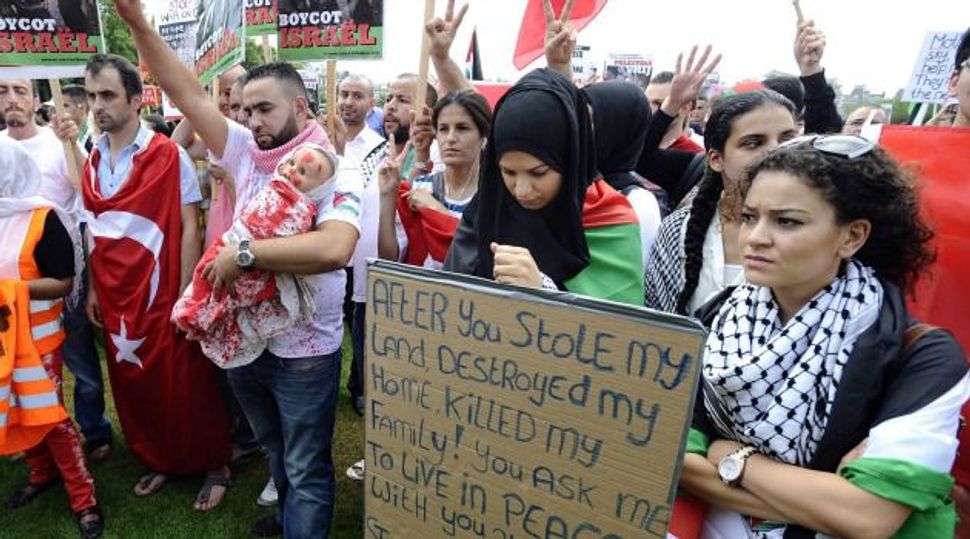 Stop the Hate: Anti-Israel protests have spread in Holland. Jews are demanding a crackdown on anti-Semitic speeches. Image by getty images

Following repeated calls to kill Jews in protest rallies in The Hague, representatives of the Dutch Jewish community urged local authorities to crack down on anti-Semitic incitement.

The appeal by the Center for Information and Documentation on Israel, or CIDI, came Friday following two demonstrations in The Hague this month in which protesters made menacing statements about Jews.

“The Hague is known internationally as a city of peace and law,” CIDI wrote in the statement. “It is unfathomable that this could happen in this city.”

The statement was in reference to a demonstration by 150 people in the heavily Muslim Schilderswijk neighborhood of the Hague. Protesters who had gathered there on Thursday evening to demonstrate against Israel’s actions in Gaza chanted “death to Israel, death to the Jews” in Arabic.

The prosecutor’s office of the Hague said in a statement that a police officer who speaks Arabic was present at the demonstration but did not find that the calls “crossed the line.” But the prosecutor’s office will review video footage of the demonstration to determine whether the calls constituted incitement to hate and will punish the parties responsible if their actions violated the law, the statement said.

The CIDI, a watchdog monitoring anti-Semitism, was joined in its call by the Central Jewish Board, or CJO — the umbrella group representing Jewish communities and organizations in the Netherlands.

An earlier protest in the Schilderswijk on July 4 — four days before Israel launched its assault on Hamas — featured similar calls. That rally was to protest the arrest of Dutch Muslims who had fought with jihadists in Syria.