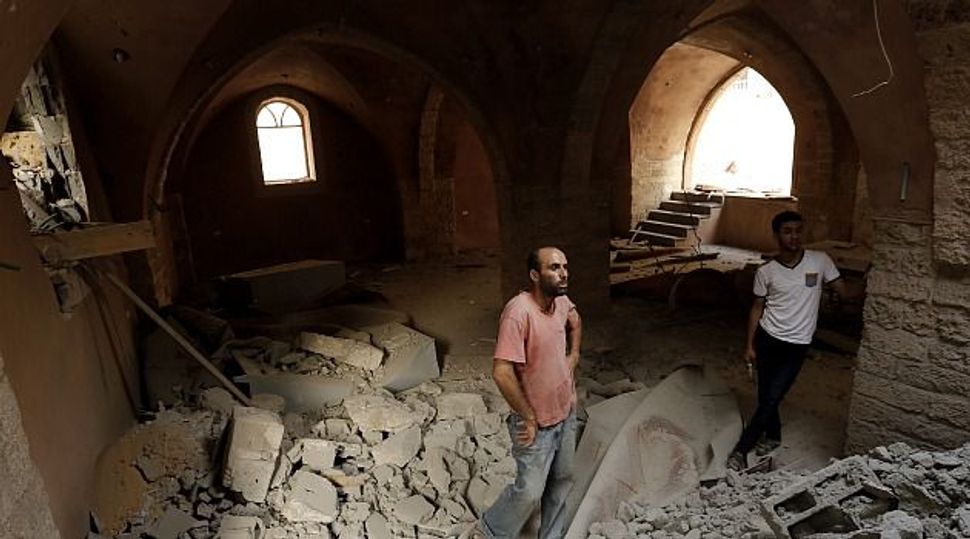 Reduced to Rubble: Palestinians inspect damage at a historic mosque destroyed in an Israeli attack. Image by getty images

Hamas claimed responsibility on Saturday for a deadly Gaza Strip ambush in which an Israeli army officer may have been captured, but said the incident likely preceded and therefore had not violated a U.S.- and U.N.-sponsored truce.

The statement by Hamas’s armed wing, the Qassam Brigades, appeared aimed at preempting any intensification of Israel’s 25-day-old Gaza offensive as well as deflecting international blame for the collapse of Friday’s ceasefire.

Israel says Palestinian gunmen stormed out of a tunnel to ambush its infantrymen in southern Rafah a 9.30 a.m., one and a half hours after the halt to hostilities came into effect, killing two and hauling away an army lieutenant, Hadar Goldin.

Hamas said that if Goldin had been captured he may have been killed in Israeli hostilities that followed the raid.

The incident triggered mid-morning Israeli shelling of Rafah that killed 150 Palestinians. By early afternoon, Israel declared an end to the truce – which was meant to have lasted 72 hours, allowing for humanitarian relief to reach Gaza’s 1.8 million Palestinians and for further de-escalation talks.

Washington accused Hamas of a “barbaric” violation of the Egyptian-mediated agreement that has also involved Turkey, Qatar and U.S.-backed Palestinian President Mahmoud Abbas. The United Nations, while saying it had not verified the circumstances of the flare-up, questioned Hamas’s truce commitment and demanded Goldin’s release.

Citing an internal investigation complicated by inability to communicate with its gunmen in the area of the ambush in eastern Rafah, Hamas’s Qassam Brigades said on Saturday it believed that the ambush took place at 7 a.m. in response to advances by Israeli ground forces.

“We lost contact with the (Hamas) troops deployed in the ambush and assess that these troops were probably killed by enemy bombardment, including the soldier said to be missing – presuming that our troops took him prisoner during the clash,” the Brigades said in a statement issued in Arabic and English.

“The Qassam Brigades has no information as of this time about the missing soldier, his whereabouts, or the circumstances of his disappearance.”

Israel, with U.S. backing, had said that during any truce its ground forces would continue their main mission of locating and destroying tunnels that have been used for Hamas for several cross-border attacks.

Israeli officials have long voiced concern that Palestinian guerrillas would try to capture a soldier or an Israeli civilian. In 2011, Israel released more than 1,000 Palestinian prisoners in exchange for Gilad Shalit, a soldier snatched by Hamas five years earlier.

RISKS ON THE GROUND

Hamas, whose gunmen are dug in for battle in Gaza’s battered districts, deemed such Israeli moves potential provocations.

“We informed the mediators who participated in arranging the humanitarian ceasefire of our agreement to cease fire against Zionist cities and settlements and that we cannot operationally cease fire against troops inside the Gaza Strip that conduct operations and move continuously,” the Qassam Brigades said.

“These enemy forces could easily come in contact with our deployed ambushes, which will lead to a clash.”

Israel launched a Gaza air and naval offensive on July 8 following a surge of cross-border rocket salvoes by Hamas and other Palestinian guerrillas, later escalating into ground incursions centered along the tunnel-riddled eastern frontier of the enclave but often pushing into residential areas.

Palestinian officials say 1,650 Gazans, most of them civilians, have been killed, including a muezzin who died in an Israeli strike on a northern mosque on Saturday.

Sixty-three Israeli soldiers have been killed, and Palestinian shelling has killed three civilians in Israel.

Hamas said it launched long-range rockets on Saturday at the Israeli cities of Haifa and Tel Aviv. There was no word in Israel of Haifa being struck, but the military said its Iron Dome interceptor had shot down rockets over Tel Aviv and the southern city of Beersheba. No one was hurt by the salvo.

After Friday’s ceasefire was shattered, Israeli Prime Minister Benjamin Netanyahu called his security cabinet into special session and warned Hamas and other militant groups they would “bear the consequences of their actions”.

Israeli media quoted unnamed government officials as saying Netanyahu and Defense Minister Moshe Yaalon would hold course in Gaza – suggesting that rather than escalate, they would stick to a tunnel-hunt the military predicts could be over within days.

“I think it’s going to be very hard to put a ceasefire back together again if Israelis and the international community can’t feel confident that Hamas can follow through on a ceasefire commitment,” he said on Friday.

U.S. Secretary of State John Kerry said he had asked Qatar, which is close to Hamas, and Turkey to help free the soldier.

“We have urged them, implored them, to use their influence to do whatever they can to get that soldier returned,” a senior State Department official told reporters traveling with Kerry. “Absent that, the risk of this continuing to escalate, leading to further loss of life, is very high.”

Kerry said the international community “must now redouble its efforts to end the tunnel and rocket attacks by Hamas terrorists on Israel and the suffering and loss of civilian life”.

Turkey said it would do its best to help, but that reinstating the truce should be the priority and that Ankara also worried about the soaring Palestinian civilian toll in Gaza. Obama said he was in constant contact with Netanyahu and that more needed to be done to protect Palestinian civilians.

In a boost to Israel, the U.S. Congress approved $225 million in emergency funding for Iron Dome, sending the measure to Obama to be signed into law. The House of Representatives approved the funding by a 395-8 vote late on Friday, several hours after the Senate passed it unanimously.

The ceasefire, which began at 8 a.m. (0500 GMT) on Friday, had prompted Palestinian families to trek back to devastated neighborhoods where rows of homes have been reduced to rubble.

It was to be followed by Israeli-Palestinian negotiations in Cairo on a longer-term solution.

A senior Egyptian Foreign Ministry official said the talks would still begin on Sunday, and that Cairo “expects the two sides to cease fire before the launch of negotiations”.

Amid strong public support in Israel for the Gaza campaign, Netanyahu had faced intense pressure from abroad to stand his forces down. International calls for an end to the bloodshed intensified after shelling that killed 15 people sheltering in a U.N.-run school in Gaza’s Jabalya refugee camp on Wednesday.

Hamas, isolated in an Arab world concerned about the rise Islamist militancy, is seeking an end to Israel’s blockade of Gaza. It also wants a hostile Egypt to ease restrictions at its Rafah crossing with the territory imposed after the military toppled Islamist president Mohamed Mursi last year.