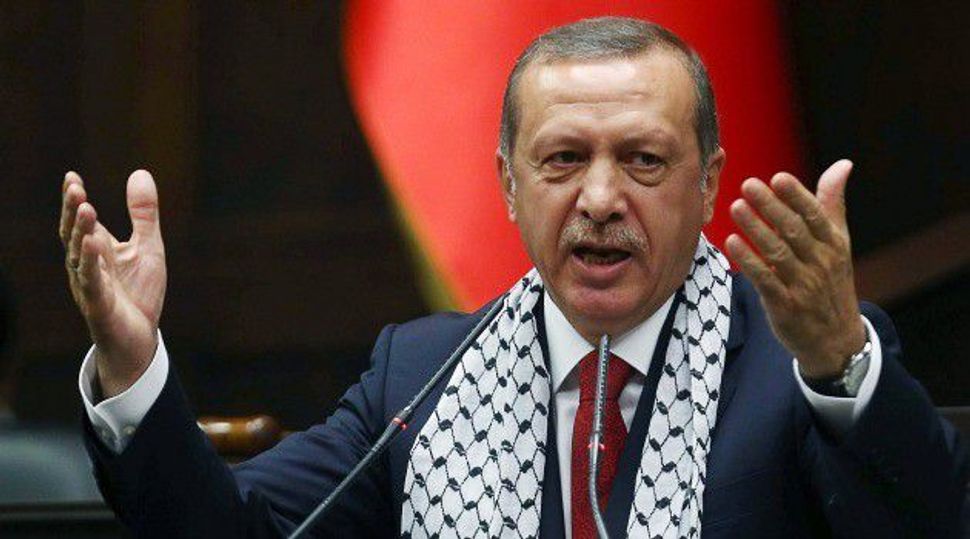 Turkish Prime Minister Tayyip Erdogan accused Israel on Sunday of deliberately killing Palestinian mothers and warned it would “drown in the blood it sheds”, pulling foreign policy to center stage as a presidential race enters its final week.

Addressing hundreds of thousands of supporters at his biggest rally so far ahead of the Aug. 10 election, Erdogan again likened Israel’s actions to those of Hitler, comments that have already led Israeli Prime Minister Benjamin Netanyahu to accuse him of anti-Semitism and drawn rebuke from Washington.

“Just like Hitler, who sought to establish a race free of all faults, Israel is chasing after the same target,” Erdogan told the sea of cheering supporters at an Istanbul arena.

“They kill women so that they will not give birth to Palestinians; they kill babies so that they won’t grow up; they kill men so they can’t defend their country … They will drown in the blood they shed,” he said.

Erdogan’s comments drew a sharp rebuke from a Jewish leader in the United States, who called the Turkish prime minister “the Joseph Goebbels of our time,” referring to Hitler’s chief propagandist.

“The time has come for world leaders to say that he has now crossed a line, and has crossed a line into the area of anti-Semitism and the world won’t tolerate it,” Rabbi Marvin Hier, founder and dean of the Simon Wiesenthal Center in Los Angeles, told Reuters.

Pro-Palestinian sentiment runs high in mostly Sunni Muslim Turkey, and protesters have repeatedly taken to the streets in recent weeks to demonstrate against Israel’s offensive in Gaza.

Over 50 million Turks are expected to vote next Sunday, electing their president directly for the first time. Two polls last month put Erdogan on 55-56 percent, a 20-point lead over the main opposition candidate, Ekmeleddin Ihsanoglu.

Ihsanoglu, a diplomat and academic who was at the helm of the Organization of Islamic Cooperation for nine years, has accused Erdogan of populism with his anti-Israeli rhetoric.

“I think the foreign policy issues are used in domestic politics to rally people, but it creates problems and pushes governments into corners,” Ihsanoglu, who has run a much lower-key campaign than Erdogan, told Reuters in an interview last week.

Kurdish candidate Selahattin Demirtas, running a distant third in the polls, urged Erdogan on Sunday to cut economic and military ties with Israel instead of “screaming and shouting”. Turkey was once Israel’s closest regional ally.

“Forget the shouting … If you want to provide help to the Palestinian people, stop fooling the people. With a serious boycott, let’s all together stop the Israeli state’s policies of massacres,” he told tens of thousands of supporters at a rally that was also held on the Asian side of Istanbul.

Israel began its offensive against Gaza on July 8 following a surge of cross-border rocket salvoes by Hamas and other guerrillas. Sunday’s fighting pushed the Gaza death toll given by Palestinian officials to 1,775, most of them civilians. Israel has confirmed that 64 soldiers have died in combat, while Palestinian rockets have also killed three civilians in Israel.

Erdogan began his speech by reciting all 40 lines of the Turkish national anthem to roars from supporters who waited hours for him in scorching heat in the newly-built rally arena in Istanbul’s Maltepe district.

Local media said more than 4,600 buses and 75 boats had carried his supporters to the site from across Istanbul.

“August 10 will be a cornerstone,” Erdogan said in a speech broadcast live on a dozen national television channels.

“Do you know what you will say to your children, to your grandchildren in the future? That you have voted for the first president that the people voted for,” he said.

Erdogan may not yet have engineered the full presidential system he wants for Turkey. But he has made clear that the direct nature of this vote will enable him to exercise stronger powers than past incumbents who were appointed by parliament to a role that was largely ceremonial.

A “council of wise men” – made up partly of close allies in his current cabinet – is likely to help oversee top government business, senior officials have told Reuters, effectively relegating some ministries to technical and bureaucratic roles.

Erdogan’s rival say his domination of the Turkish media and his profile as a sitting prime minister have made for an unfair race. Both Ihsanoglu and Demirtas have challenged him to a live televised debate, which has so far met with no public response.

“The earth and sky are full of your posters,” Demirtas told his rally on Sunday. “You are experiencing a boom in confidence, so why are you scared of a two-hour TV show?”