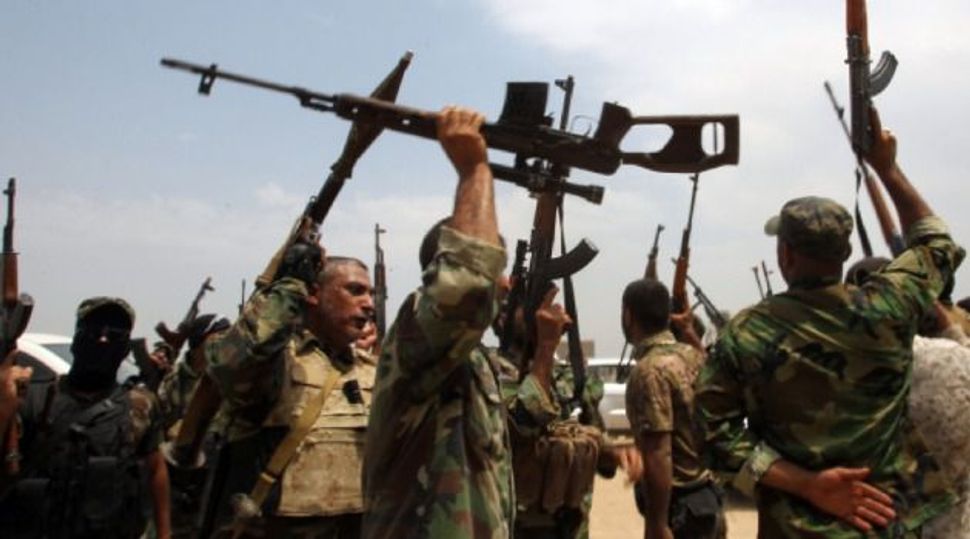 On the March: Anti-ISIS Shiite fighters in Iraq. Image by Getty Images

Israeli Prime Minister Benjamin Netanyahu called ISIS and Hamas “branches of the same poisonous tree” after the former group released a video showing the beheading of a British aid worker.

The terror group on Saturday released a video showing the apparent murder of David Haines, who was kidnapped in Syria in March of last year while working for the French Agency for Technical Cooperation and Development, or ACTED. Haines, 44, of Perth, Scotland, is the father of two.

Haines was shown nearly two weeks ago being threatened at the end of a video showing the beheading of Jewish-American journalist Steven Sotloff, who also had dual Israeli citizenship.

The video released on Saturday is titled, “A Message to the Allies of America.” It shows British Prime Minister David Cameron talking in a speech about working with the Iraqi government and allied Kurdish Peshmerga forces against ISIS.

“This British man has to pay the price for your promise, Cameron, to arm the Peshmerga against the Islamic State,” said a masked man dressed in black with a British accent, who appears to be the same man who killed Sotloff and American journalist James Foley.

At the end of the video, a captive identified as British citizen Alan Henning, was shown and threatened with death if Cameron continued to support the fight against ISIS.

Haines’ family had appealed to the kidnappers earlier in the day to contact them in order to secure his release.

Cameron called the beheading “an act of pure evil” and vowed to bring the killers to justice.