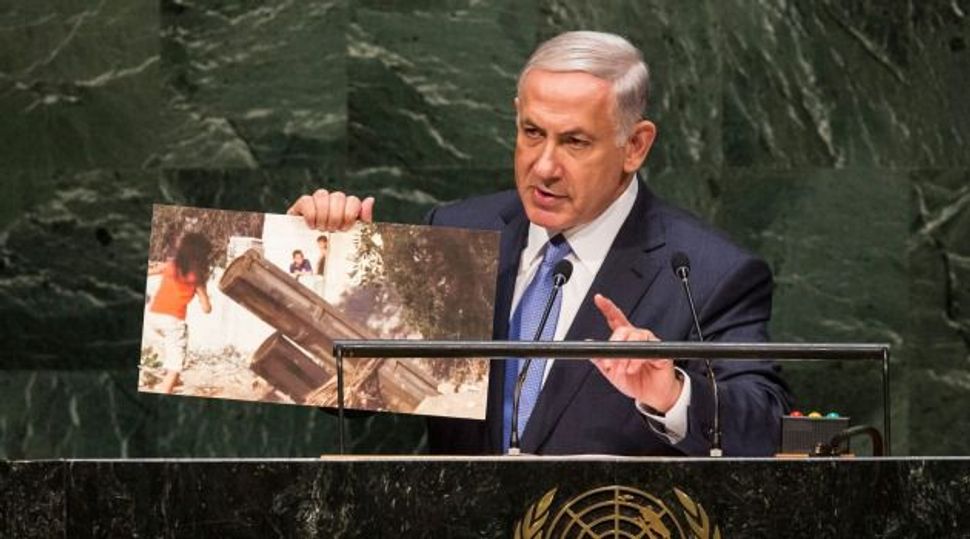 Dangerous Game: Benjamin Netanyahu shows photo of what he said was Palestinian children playing near a Hamas rocket launcher during his speech at the United Nations General Assembly. Image by getty images

Israel’s Prime Minister Benjamin Netanyahu on Monday tried to shift the spotlight away from Islamic State fighters and back to Iran, warning the United Nations that a nuclear-armed Tehran would pose a far greater threat than “militant Islamists on pickup trucks.”

It was the fifth day of speeches at the annual gathering of the 193-nation General Assembly in New York, where Islamic State’s seizure of large swaths of Syria and Iraq and its alleged massacres of civilians and soldiers have dominated discussions at the U.N. podium and on the sidelines.

Describing Iran, Islamic State and the militant group Hamas that controls the Gaza Strip as part of a single team, Netanyahu compared them all to Germany’s Nazis, who killed six million Jews in World War Two.

“Make no mistake, ISIS (Islamic State) must be defeated,” Netanyahu added. “But to defeat ISIS and leave Iran as a threshold nuclear power is to win the battle and lose the war.”

Iran rejects allegations by Western powers and their allies that it is developing the capability to produce atomic weapons and wants economic sanctions lifted as part of any nuclear deal.

By describing Iran, Islamic State and Hamas as part of the same team, Netanyahu appeared to be playing on already existing doubts among U.S. lawmakers about the wisdom of President Barack Obama’s decision to engage with Tehran after the 2013 election of Iranian President Hassan Rouhani, a soft-spoken pragmatist, to resolve the 12-year-old nuclear standoff between the Islamic Republic and the West.

“You know, to say that Iran doesn’t practice terrorism, is like saying Derek Jeter never played shortstop for the New York Yankees,” he said.

These issues will undoubtedly come up during Obama’s meeting with Netanyahu in Washington on Wednesday.

“Iran’s nuclear military capabilities must be fully dismantled,” Netanyahu said. He added that the goal of a charm offensive by Iran’s “smooth talking president and foreign minister” was to get international sanctions lifted “and remove the obstacles to Iran’s path to the bomb.”

“The question before us is whether militant Islam will have the power to realize its unbridled ambitions,” he said. “There is one place where that could soon happen – the Islamic State of Iran.”

He twice referred to the “Islamic State of Iran,” which would appear to be a deliberate play on the country’s official name – the Islamic Republic of Iran – and Islamic State, which is often referred to as ISIL or ISIS.

Netanyahu referred mockingly to Rouhani’s speech to the 193-nation General Assembly last week, in which he accused the West and its allies of nurturing the group.

“Iran’s President Rouhani stood here last week and shed crocodile tears over what he called the globalization of terrorism. Maybe he should spare us these phony tears and have a word instead with Iran’s Revolutionary Guards,” he said.

Rouhani said he supported efforts to combat Islamic State, a Sunni militant group that views the predominantly Shi’ite Iran as heretical, though he said it should be handled by the region, not countries outside the Middle East.

Iran and six world powers held 10 days of talks on the sidelines of the annual gathering of world leaders at U.N. headquarters in New York City but made little progress in overcoming deep disagreements on issues such as the future scope of Tehran’s nuclear program and the speed of lifting sanctions.

The talks involve Iran, the United States, Britain, France, Germany, Russia and China. They are aimed at getting a long-term agreement that would gradually lift sanctions against Tehran in exchange for curbs on its atomic program.

The two sides are expected to meet again in Europe in the next two weeks, Iranian and Western officials say. Speaking about the talks, U.S. Deputy Secretary of State Bill Burns told reporters in Washington: “It’s no secret that the gaps that remain in the negotiations are quite significant right now.”

Netanyahu’s strident critique of Iran may be a preview of the hard line he will take in Washington. He has repeatedly warned Obama not to make concessions in the nuclear talks.

Netanyahu, on the topic of the peace process between Israel and the Palestinians, expressed his support for a “historic compromise” with the Palestinians that would bring peace and stability for the Israeli people and the region. But he offered no new details of what such a compromise would envisage.

An Egyptian-brokered ceasefire in late August ended a 50-day war in the Gaza Strip between Israel and the Palestinian militant group Hamas that controls Gaza. Israel began an offensive on July 8 with the aim of halting cross-border rocket salvoes by Hamas and other militants.

Netanyahu repeated his position that “ISIS and Hamas are branches of the same poisonous tree.”

The conflict devastated some Gaza districts and killed more than 2,100 Palestinians, mostly civilians, according to the Gaza health ministry. Sixty-seven Israeli soldiers and six civilians in Israel were also killed.