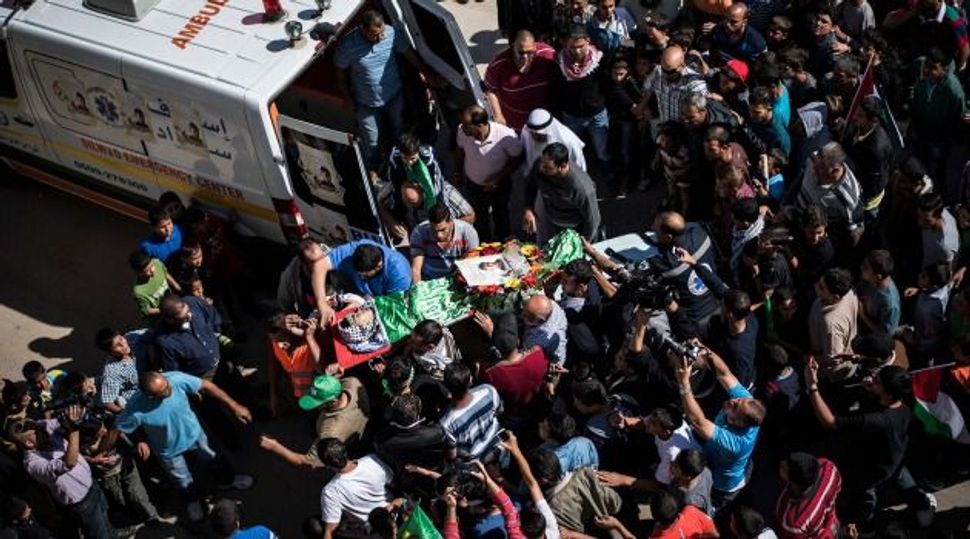 Fresh Grief: The body of Palestinian-American Orwa Hammad is carried during a funeral on October 26, 2014 in Silwad, West Bank. Image by Getty Images

Thousands of mourners attended the funeral of a Palestinian boy with American citizenship who was killed by Israel Defense Forces soldiers.

The funeral for Orwa Hammad, 14, took place Sunday afternoon in the West Bank village of Silwad, near Ramallah.

The funeral was delayed until Sunday so that Hammad’s father, who lives in the United States, and his mother, who was in Jordan, could attend, the Palestinian Maan news agency reported.

The Israel Defense Forces told reporters that the teen was shot as he was preparing to throw a firebomb at cars driving on Highway 60. The soldiers opened fire “in order to neutralize the threat to the lives of civilians driving on the highway,” the IDF Spokesman’s Department said.

U.S. State Department spokeswoman Jen Psaki said in a statement released on Friday that officials from the U.S. Consulate General in Jerusalem have been in contact with the family and were providing “all appropriate consular assistance.”

“We call for a speedy and transparent investigation and will remain closely engaged with the local authorities, who have the lead on this investigation,” Psaki said.“We continue to urge all parties to help restore calm and avoid escalating tensions in the wake of the tragic recent incidents in Jerusalem and the West Bank,” the statement concluded.