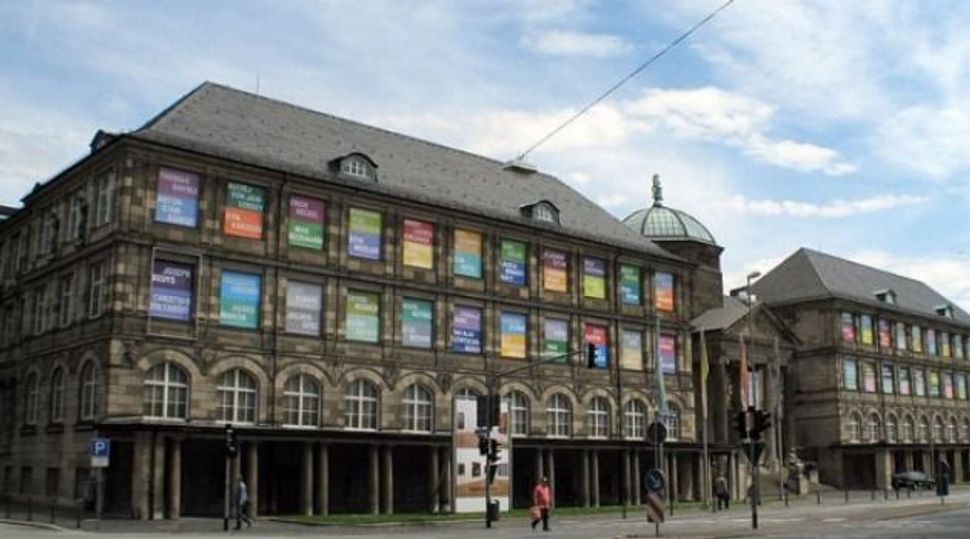 Backward Idea: The Wiesbaden MuseumA museum in Germany has a novel plan to buy back a painting stolen from a Jewish collector during the Nazi era. Image by wikimedia

A museum in Germany has come up with a novel plan to buy back a painting stolen from a Jewish collector during the Nazi era.

The Wiesbaden Museum has hung the 19th century painting by Hans von Marées backwards, in a bid to raise public awareness and also the $118,000 it needs by Nov. 5 to buy the painting from its rightful heirs, museum director Alexander Klar announced in late October.

The amount to be raised covers one third of the value of the painting plus the cost of the fundraising campaign, according to an online report from Hessische Rundfunk radio and TV.

The painting, titled “Die Labung” (Sustenance), was part of the collection of Jewish industrialist Max Silberberg of Breslau. He was forced to sell the collection to the Nazis in 1934. Silberberg and his wife, Johanna, were later killed in Auschwitz.

The rightful heir to the collection is the Israel-based Gerta Silberberg Discretionary Trust. In 1980, a local collector bequeathed the painting to the museum.

HR Online reported that Wiesbaden Museum was a repository for art robbed from Jewish owners during the Third Reich. The museum has been researching the provenance of works in its collection, with an aim to providing restitution. It already has returned two paintings to their proper heirs, or bought them back, HR reported.