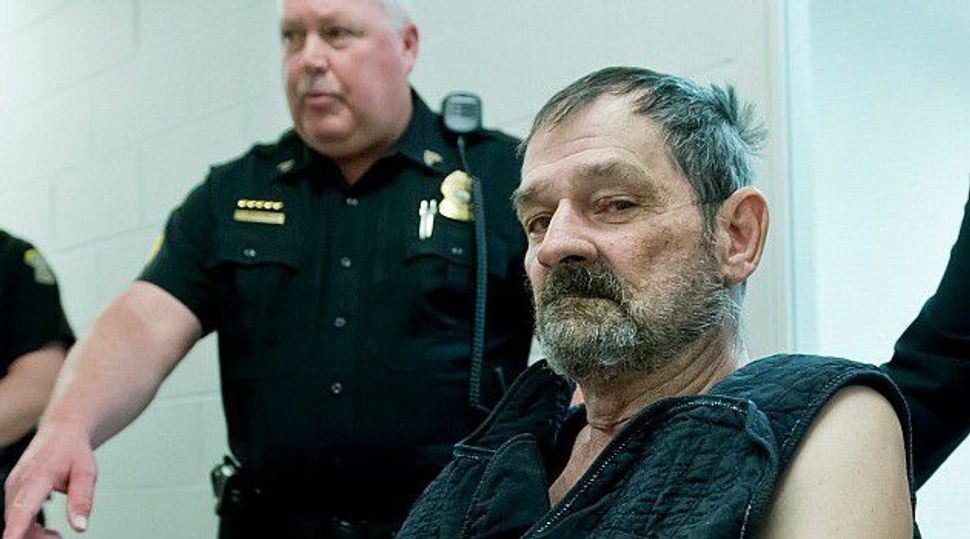 The white supremacist suspect in the shootings of three people at two Jewish institutions in suburban Kansas City said he wanted to “be sure I killed some Jews before I died.”

Frazier Glenn Miller, who also goes by the name Frazier Glenn Cross, told the Kansas City Star in an interview published on Sunday that he decided in March to carry out the April attacks on two Jewish sites in the city after he became so sick with emphysema that he thought he would soon die.

“I was convinced I was dying then,” Miller, of Aurora, Mo., told the newspaper in his first published interview since the April 13 attacks. “… I wanted to make damned sure I killed some Jews or attacked the Jews before I died.”

Miller is suspected of killing William Lewis Corporon, a retired physician, and his 14-year-old grandson, Reat Griffin Underwood, in the parking lot of the Jewish Community Center of Greater Kansas City in Overland Park, Kan., and then shooting to death Terri LaManno, a Catholic mother of two, in the parking lot at Village Shalom, a Jewish assisted-living facility a few blocks away, where she was visiting her mother.

None of the three victims were Jewish.

Miller told the newspaper that he conducted reconnaissance missions to the Jewish Community Center and Village Shalom in the days before the shootings.

“Because of what I did, Jews feel less secure,” he said. “Every Jew in the world knows my name now and what I did. As for these … white people who are accomplices of the Jews, who attend their meetings and contribute to their fundraising efforts and who empower the Jews, they are my enemy too. A lot of white people who associate with Jews, go to Jewish events and support them know that they’re not safe either, thanks to me.”

He told the newspaper that he regretted killing “the young white boy.”

Miller was the grand dragon of the Carolina Knights of the Ku Klux Klan in the 1980s and subsequently a founder of the White Patriot Party. He served three years in prison on weapons charges and for plotting the assassination of the founder of the Southern Poverty Law Center, Morris Dees.

Miller had not been involved in criminal activity for decades, but he kept his views known and publicized them as avidly as he could.