6 Reasons ‘Pinkwashing’ Israel on Gay Rights Is So Wrong 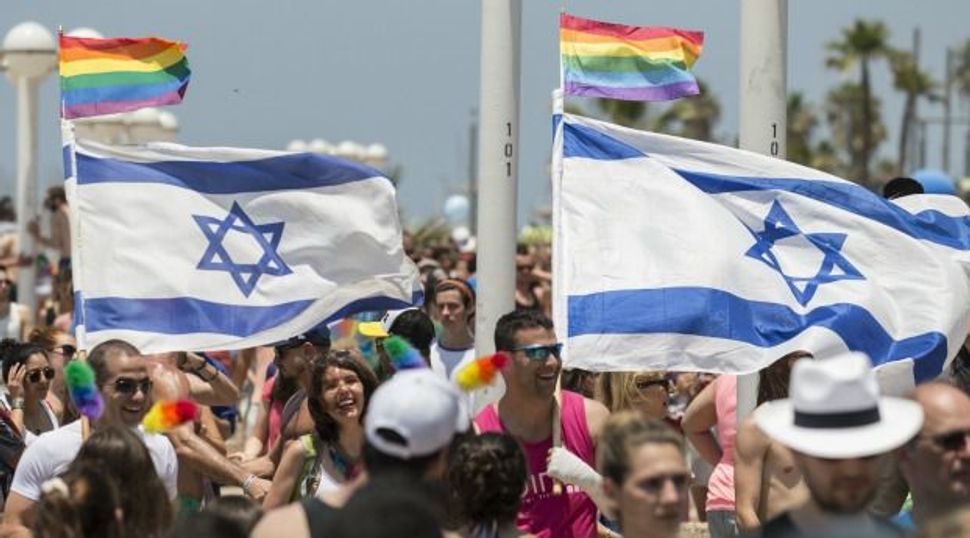 No matter how many times the tactic is called out, its proponents just keep on doing it, blithely unaware of how transparently ridiculous it is — or how offensive.

So, let’s look closely at one recent example: last week’s full-page ad in the New York Times proclaiming “Hamas, ISIS, and Iran kill gays like me – in Israel, I am free,” together with supporting blog posts and Jerusalem Post puff pieces. Let’s see it for what it is, and try to explain to its backers – Rabbi Shmuley Boteach’s platform “This World: The Values Network” and the right-wing Zionist propagandists Stand With Us – why so many LGBT people are offended, rather than convinced, by such efforts.

Pinkwashing is trumpeting a country’s excellent record on LGBT rights as a form of propaganda. In the Israeli case, its purpose is to depict Israel as a liberal democracy – despite all that Occupation, anti-Arab discrimination, and Jews-first stuff you read about in the media. Indeed, pinkwashing usually doesn’t mention these issues, because pinkwashing’s logic is extremely blunt: we like gays, so gays (and liberals) should like us.

Now, as I have written many times before, not all Israeli gay messaging is pinkwashing. Some – I would guess most – is plain old PR meant to attract gay tourists to Tel Aviv. Which it does.

Nor are pinkwashing’s claims, themselves, entirely false. Yes, Israel has an excellent record on LGBT equality, and Iran, Egypt, and Palestine have appalling ones. Of course, pinkwashers’ data is quite selective; they rarely mention the thriving gay scene in Beirut, for example, and exaggerate the level of anti-gay violence in the West Bank. But I’ll set these quibbles aside and stipulate to their view of the facts.

Because even without debating the data, there are six reasons why pinkwashing is offensive.

Let’s be honest: pinkwashing is manipulative. If you really cared about LGBT equality, you’d be out there fighting for it. You’d be opposing conservative efforts to make anti-gay “family values” a human right at the United Nations. You’d be opposing American evangelicals’ spreading of hate in Africa and Russia. You’d be ensuring access to transgender healthcare, HIV protection for sex workers, and sex education for everyone.

But pinkwashers don’t do this. They probably don’t even know about these issues. They’re only for “gay rights” when it suits their propagandistic interests. Do you see how transparently offensive this is?

You’re Usually Against Us

Worse, many pinkwashers are actually on the wrong side of history, when it comes to LGBT people. The dough-faced gay boy in Shmuley’s ad, Rennick Remley, is actually a longtime low-level Republican operative. Much of the campaign’s funding is reported to be from Sheldon Adelson, the Republican mega-donor.

These are the same Republicans who have fought for decades to render my marriage null and void, who continue to oppose nondiscrimination protections for gay people, and who are crusading, state by state, to erode LGBT equality in the name of “religious freedom.”

Oh, but those are the bad Republicans, you say. No – those are Republicans, full stop. The handful of gay Republicans like Remley are routinely drummed out of every significant party convention. Conservative evangelicals, meanwhile, make up 60% of the Republican base.

A Country Can Be Pro-Gay and Anti-Human-Rights

Now let’s get to the heart of the matter: a country can be pro-gay and anti-human-rights.

I recognize that pinkwashers support Israel’s actions in the territories, its wars, and its anti-Arab policies within the Green Line. But let’s imagine someone who doesn’t – me, for example. When I balance Israel’s pro-gay policies on the human rights scale against its anti-Palestinian ones, I find the scale still tips sharply to the anti-human-rights side.

It’s not that I don’t see the pro-gay parts. I get it. And I get that other places are very bad. I just weight the Occupation, discrimination, settlements, home demolitions, Jewish State law proposals, and denial of citizenship to 2.5 million people more.

The scapegoating accusation points to pinkwashing’s tendency to distort Israel’s critics into weird caricatures that have no basis in reality. As I have said many times in these pages, I care about Israel, support Israel, and believe that organizations like Stand With Us are harming Israel. I virulently oppose Hamas – oh, and ISIS, which has nothing to do with this issue and which is actually quite different from Hamas, and an enemy of Iran. (The Israeli Right’s latest talking points are to link Hamas, ISIS, and Iran, even though at this very moment Iran is bombing ISIS in Iraq and Syria. Do all Muslims look alike, too?)

In fact, no one is “remain[ing] silent” about the oppression these regimes are inflicting on LGBT people. Yes, many are suspicious of heaping criticism on them, for fear of being used by pinkwashing propagandists. But the notion that Israel is somehow the sole focus of human rights activists is just right-wing echo-chamber stuff. Shmuley, turn off Fox News for a minute. No one has the view this ad depicts. And it’s counterproductive to assert it.

Where are the Palestinian and Israeli LGBT People?

Even worse than stereotyping your Western opponents, though, is silencing the people you’re supposedly defending. It’s noteworthy that the poster boy of this campaign is a white, cisgender, American, Republican gay man. This campaign renders Palestinian LGBT people invisible, voiceless, and powerless.

If you were to actually listen to Israeli or Palestinian gay people, you’d hear very different stories from those of the pinkwashers.

From most Palestinian queers – certainly, every one I have ever talked to, which is probably hundreds by now – the Occupation is a far more serious issue than anti-gay persecution in the West Bank and Gaza. Yes, it’s hard to be gay in Gaza – just as it’s hard to be gay in Meah Shearim. But queer Palestinians will tell you that the regime of land confiscation, settlements, checkpoints, ID cards, building restrictions, and of course the wholesale bombing of civilian areas is a far heavier burden.

Most Israeli LGBT people, meanwhile, are on the political left. There is no single gay Israeli (or Palestinian) perspective, of course, but statistically, most oppose Netanyahu, oppose settlements, and oppose anti-Arab policies in Israel. In other words, they oppose everything that Stand With Us and Sheldon Adelson support.

Oh, and incidentally – if you’d listen to Iranian LGBT people, which I have, they’ll tell you that American propagandizing about gays makes life worse for them. It does not help gays in the Muslim world when American conservatives make demands on their behalf. Pinkwashers should shut up and listen.

What Should Gays Care About?

Finally, pinkwashing assumes a narrow-minded, parochial focus on the part of LGBT people and allies. It’s as if all gays should be like the “Israel-First” part of the Jewish community. If you’re for me, I’m for you.

In fact, many LGBT people identify more with victims of oppression than they do with oppressors who happen to be gay. Having experienced oppression in our lives, we know it – and fight it – when we see it. That’s why there are significant LGBT contingents in the #blacklivesmatter marches, in the climate justice movement, and in the Boycott, Divestment, and Sanctions (BDS) movement. Because for many of us, being LGBT means being anti-oppression.

Of course, many gay people are, indeed, Gay-Firsters. And many are right-wing Zionists. But to assume that to be pro-gay, or to be gay, necessitates that we “Speak up for Israel,” whatever that means, is to reduce LGBT experience to a narrow, tribal identity. It’s what the critic Jasbir Puar calls “homonationalism.” (You should read her, if you haven’t – which I suspect you haven’t.) It misses the vital bonds of solidarity that many queer people feel with other oppressed groups.

Not only is such me-first tribalism a low form of gay identity, I think it’s a low form of Jewish identity as well. Now there’s an idea. Maybe, instead of teaching gays how to be gay, pinkwashers might learn from us some healthier ways to be Jewish.

6 Reasons ‘Pinkwashing’ Israel on Gay Rights Is So Wrong