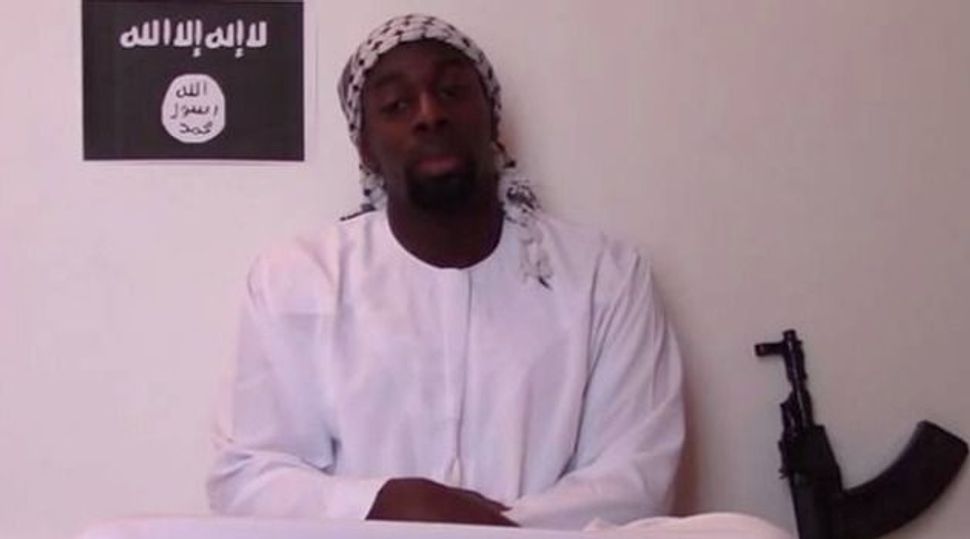 One of three gunmen behind the worst militant attacks in France for decades appeared in a video released online on Sunday, declaring his allegiance to the Islamic State armed group and urging French Muslims to follow his example.

In the seven-minute video apparently intended for release after the actions, Amedy Coulibaly, who staged the attack on a Jewish deli, said the planned assaults on a satirical journal and a Jewish target were justified by French military interventions overseas.

A French anti-terrorist police source said there was no doubt it was Coulibaly in the French-language recording.

Seventeen victims were killed in three days of violence that began with an attack on the Charlie Hebdo weekly on Wednesday and ended with Friday’s dual sieges at a print works outside Paris and a kosher supermarket in the city.

French security forces killed Coulibaly, 32, on Friday after he planted explosives at the Paris deli in a siege that claimed the lives of four hostages. They also shot dead two brothers behind the Hebdo killings, Said and Cherif Kouachi, after they took refuge in the print works.

The Kouachi brothers said they were aligned to al Qaeda, which competes for influence with Islamic State among militant Islamists.

Coulibaly had also called BFM-TV on Friday to claim allegiance to Islamic State, saying he wanted to defend Palestinians and target Jews.

He said in that call that he had jointly planned the attacks with the Kouachi brothers. Police confirmed they were all members of the same Islamist cell in northern Paris.

The video showed scenes of man resembling Coulibaly doing physical training and images of an arsenal of weapons and ammunition on the wooden floor of an apartment. He was shown variously in white robes, sitting with a gun at his side, and in combat outfit.

“I pledged allegiance to the Caliph as soon as the caliphate was declared,” he says, referring to Islamic State leader Abu Bakr al-Baghdadi, whose group is an anti-government paramilitary force in both Iraq and Syria that has a growing network of followers elsewhere in the Middle East and Asia.

Coulibaly said he would be working together with the Kouachi brothers: “We’ve done things a bit together, a bit apart, to try and (achieve) more impact.”