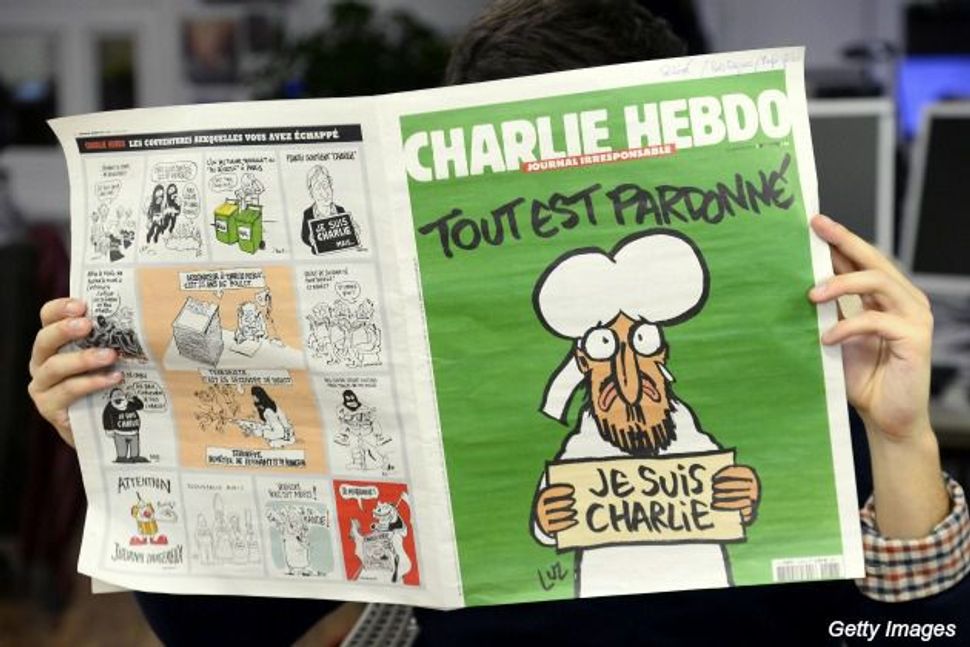 Muslim clerics in the Middle East who have denounced last week’s attack on Charlie Hebdo criticized the French satirical weekly on Wednesday for publishing new cartoons depicting Islam’s Prophet Mohammad in its first issue after the killings.

On the front of its “survivor’s edition,” which swiftly sold out its multi-million copy print run in France, the newspaper printed a cartoon of a tearful Mohammad carrying a sign reading “I am Charlie,” under the headline “All is forgiven.”

While mainstream Muslim leaders around the world have strongly condemned the attack on the newspaper, many said its decision to print more cartoons of Mohammad was an unnecessary provocation and sign of disrespect that would create a new backlash.

Such cartoons “fuel feelings of hatred and resentment among people” and publishing them “shows contempt” for Muslim feelings, said the Grand Mufti of Jerusalem and Palestinian lands, Mohammed Hussein, in a statement.

Algeria’s independent Arab language daily Echorouk responded with a front page cartoon of its own, showing a man carrying a “Je suis Charlie” placard next to a military tank crushing placards from Palestine, Mali, Gaza, Iraq and Syria.

Above, the headline reads: “We are all Mohammad.”

In Turkey, a secular opposition newspaper printed excerpts from the Charlie Hebdo edition but balked at including the cover image depicting Mohammad. Police cordoned off its headquarters over security concerns.

In Iran, a leading conservative cleric, Grand Ayatollah Nasser Makarem-Shirazi, said the publication of new satirical images of Mohammad “amounts to declaring war on all Muslims.”

Egypt’s Al-Azhar, a thousand-year-old seat of Islamic learning that has referred to the Paris attack as a criminal act, called on Muslims on Wednesday to ignore the magazine’s cartoons, labeling them “hateful frivolity.”

Many people on the streets in the Middle East said it was time to move on.

“The cartoons have no meaning, they should not affect us. We as Muslims are bigger and stronger than some cartoon. We should not pay attention, and if we react we should react with word for word and cartoon for cartoon,” said Samir Mahmoud, a retired engineer in Cairo.

Emad Awad, a Christian in Cairo, said he understood the anger of his Muslim neighbors but hoped there would be no more unrest.

“I reject completely that pictures of the prophet be published anywhere, but they’ve made their decision to do it yet again, to show their freedoms aren’t changed,” he said.

“Now that they’ve made their point, I really hope this is the last time they do this. I don’t think it will lead to more violence, but they missed an opportunity to leave the subject in the past and move forward.”

The newspaper’s defenders said the cover balanced a determination to demonstrate that it remains committed to its satirical mission and free speech, with an appropriately mournful tone and a peaceful message.

“I wrote ‘all is forgiven’ and I cried,” Renald “Luz” Luzier, who created the image, told a news conference on Tuesday at the weekly’s temporary office at left-wing daily Liberation.

“This is our front page … it’s not the one the terrorists wanted us to draw,” he said. “I’m not worried at all … I trust people’s intelligence, the intelligence of humor.”

In Turkey, Cumhuriyet, a staunchly secular opposition newspaper, printed excerpts of Charlie Hebdo, one of five international editions of the satirical newspaper.

Cumhuriyet dedicated four of its pages to Charlie Hebdo articles and cartoons. It printed a small, black-and-white version of the cover in one of its columns, but did not use the image in the special section itself, after “many consultations,” its editor in chief Utku Cakirozer said on Twitter.

Police had cordoned off the street where Cumhuriyet is located in Istanbul due to security concerns. At its Ankara offices, protesters hung banners on a nearby wall that read: “The Charlie provocation continues.”

Police had stopped trucks carrying the newspaper from the printing press to ensure it did not contain the image of Mohammad, Milliyet newspaper reported. Insulting the prophet is punishable with a prison term under a clause in the Turkish penal code that bars disrespect of religious values.

“Freedom of speech must not become a hate-speech and it is not an offense to the others. No sane person, regardless of doctrine, religion or faith, accepts his beliefs being ridiculed,” he said on a visit to Iraq.