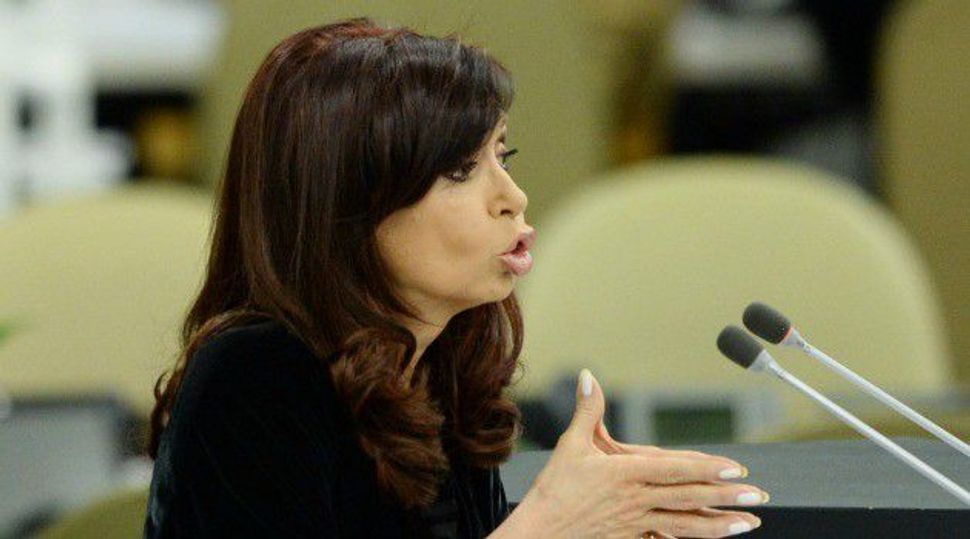 An Argentine prosecutor accused President Cristina Fernandez on Wednesday of trying to orchestrate a cover up in the investigation of Iran over the 1994 bombing of the AMIA Jewish community center in Buenos Aires.

Oil would be exchanged for Argentine grains under the government’s plan, Nisman said.

Nisman said he issued a request that a judge interrogate Fernandez and Foreign Minister Hector Timerman “for being authors and accomplices of an aggravated cover-up and obstruction of justice regarding the Iranians accused of the AMIA terrorist attack.”

Argentine courts accuse Iran of sponsoring the bombing. Iran, in preparatory talks with the United States to end its standoff with world powers over its nuclear program, denies links to the attack.

In 2013 Fernandez signed a “truth commission” deal with Iran to jointly investigate the 1994 bombing.

Nisman said Fernandez opened a back channel to the Iranian government aimed at getting the charges thrown out. The idea, Nisman said, was to sign the truth commission pact as a step toward deactivating the arrest warrants.

Fernandez said at the time that the pact would reactivate the probe, but the move was denounced by Israel and Jewish groups that said it threatened to derail proper criminal prosecution of the case. The truth commission pact was later struck down by an Argentine court.

Fernandez’s Chief of Staff Anibal Fernandez dismissed Nisman’s charge as “ridiculous.” But the allegations may cause problems for the president as she tucks into her last months in office. Argentina has a presidential election in October and Fernandez is barred from running for a third consecutive term.

“This is a very serious accusation, probably the most serious levied against Cristina Fernandez during her administration,” said Ignacio Labaqui, who analyzes Argentina for emerging markets consultancy Medley Global Advisors.

“The prosecutor is accusing her of being responsible for a maneuver to cover up the worst terrorist attack in Argentine history,” he added.

In 2007, Argentina secured Interpol arrest warrants for five Iranians suspected of being behind the 1994 blast, which came two years after a group linked to Iran and the Lebanese militant group Hezbollah claimed responsibility for an attack on the Israeli embassy in Buenos Aires, which killed 29.