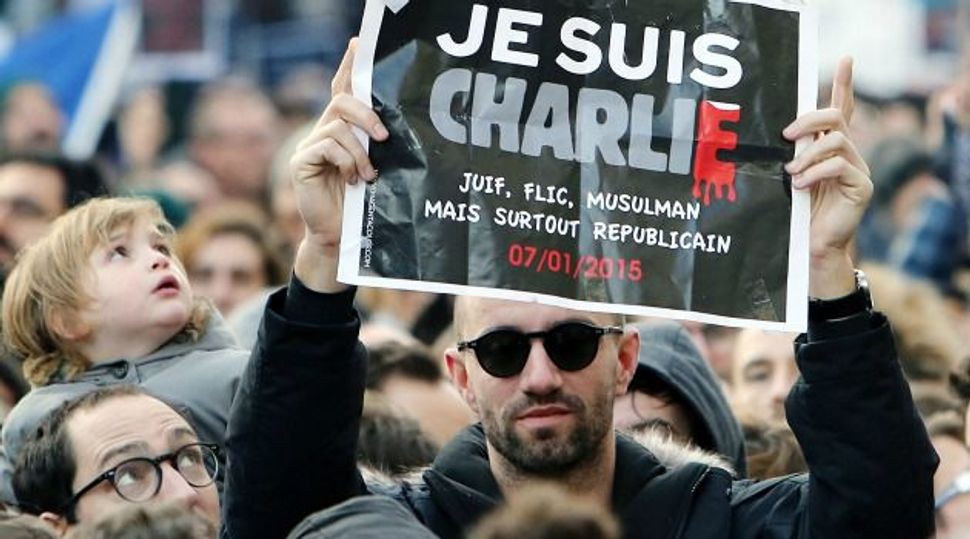 (JTA) — As he marched through Paris with some 1.5 million people, Philippe Schmidt felt he was experiencing a “beautiful moment of unity.”

For Schmidt, a Jewish human rights lawyer and vice president of the International League Against Racism and Anti-Semitism, Sunday’s so-called Republican March was “a sign of popular mobilization against extremism” following three attacks last week by Islamists in the Paris region that killed 12 at the offices of a satirical weekly, a policewoman on the street and four Jews at a kosher supermarket.

French President Francois Hollande and dozens of world leaders, including Israeli Prime Minister Benjamin Netanyahu, attended the rally in commemoration of all 17 victims that drew a record number of demonstrators.

Yet in Schmidt’s estimation, most of the people marching “were there for Charlie, not for the Jews,” he said, in reference to the killings at the offices of Charlie Hebdo, a magazine targeted for its satirical cartoons of the Prophet Muhammad.

His opinion is shared by many French Jews who, despite supporting the massive response to the attacks, doubt it will help curb rising anti-Semitic violence.

“I hope the response heralds a change in the indifference to anti-Semitism, but I am also aware that no such response came when only Jews were targeted,” Schmidt noted in reference to the murder of four in 2012 at a Jewish school in Toulouse by another Islamist, Mohammed Merah. Three children were among the victims.

“There was no Republican March or anything comparable after Toulouse,” he said.

Some prominent French Jewish figures boycotted the march because it was co-organized by far-left organizations that they hold responsible for promoting anti-Semitic violence.

“Some of the people walking today are the same people who walked against Israel last summer,” said Philippe Karsenty, the deputy mayor of the Paris suburb of Neuilly-sur-Seine, in reference to anti-Semitic violence during protests against Israel’s war with Hamas in Gaza. “This is completely hypocritical.” Many of the marchers who carried “I am Charlie” signs “would never carry a sign reading ‘I am Jewish’ or ‘I am Hyper Cacher,’” he said in reference to the supermarket that was attacked.

A vigil on Saturday night outside Hyper Cacher drew approximately 2,000 people and featured hundreds of Israeli flags and the spontaneous singing of “Hatikvah,” Israel’s national anthem.

“Look around, there are almost only Jews here,” said Serge Bitton, a resident of the Paris suburb of Saint-Mande. “The absence of non-Jews tells you everything you need to know about how French society feels about the attacks on our community.”

But the leaders of the National Bureau for Vigilance Against Anti-Semitism stayed away for reasons similar to the ones expressed by Karsenty.

By contrast, France’s chief rabbi, Haim Korsia, spoke of the march and the hundreds of smaller gatherings and walks organized elsewhere in France as a possible turning point. He has long complained of indifference to anti-Semitism in French society.

“This time, French society has done its duty,” Korsia said at a memorial ceremony for the 17 victims on Sunday at the Grand Synagogue here. “Often we asked, ‘Where is France? Where are the French?’ We feel isolated. Well, today, on this historical day for France, we felt this fraternity.”

While many French Jews doubt that their society cares as such about anti-Semitism, they are less skeptical about the government’s stance.

Hours after the hostage taking and killings at Hyper Cacher, Hollande called it an anti-Semitic attack. He and Prime Minister Manuel Valls both attended the memorial service at the Grand Synagogue, and Valls also came to the vigil outside the supermarket along with Paris Mayor Anne Hidalgo.

During an address Tuesday before the National Assembly, the French parliament’s lower house, Valls, whom many French Jews regard as something of a hero, reiterated his trademark assertion that without its Jews, “France will no longer be France.”

To Schmidt, the Valls speech and Hollande’s attendance at the synagogue “were very powerful symbols of support.”

Bitton, the Jewish resident of Saint-Mande, said he was very grateful for the government’s support. But, he added, “the government of France is not France.” “It changes every few years,” he said. “The anti-Semitism stays put.”