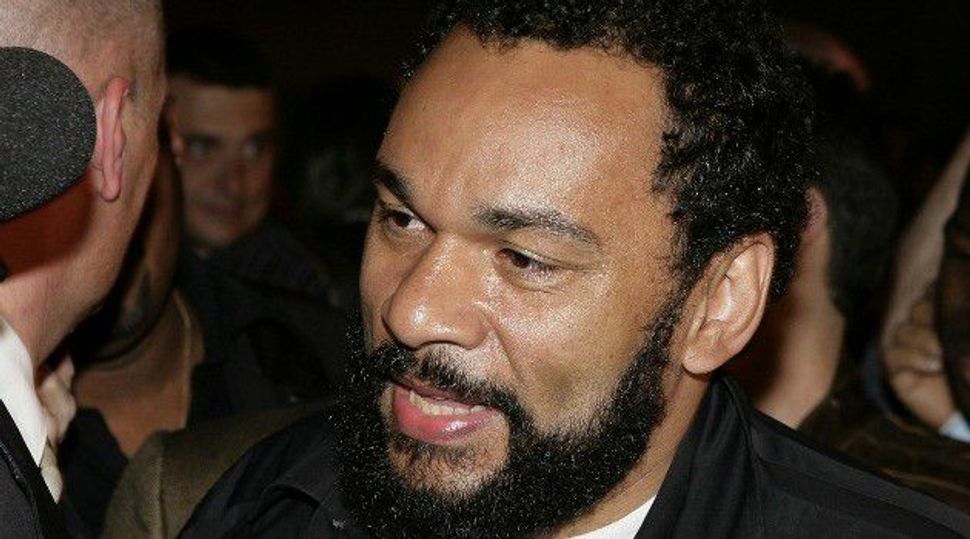 Swiss Jews said they would set up stands with information about the dangers of anti-Semitism outside venues hosting the French comedian Dieudonne M’bala M’bala.

“Freedom of expression is an essential principle but one which cannot be evoked to justify any ‘right to discriminate,’” said the announcement Thursday by CICAD, a Jewish watchdog group that monitors anti-Semitism in Switzerland’s French-speaking areas.

Dieudonne, who has multiple convictions for inciting hatred against Jews in France, is scheduled to perform on Monday in Lausanne and on the following day in Val-de-Ruz.

CICAD will set up two stands opposite the venues, it said.

Dieudonne was briefly arrested for posting a comment on Facebook about the Jan. 9 slaying of four Jews at a kosher supermarket near Paris by the Islamist Amedy Coulibaly. Spoofing the slogan “I am Charlie,” which commemorates the 12 victims of a Jan. 7 attack on the Charlie Hebdo satirical weekly by two of Coulibaly’s associates, Dieudonne wrote: “I feel like Charlie Coulibaly.”

French prosecutors said he is suspected of encouraging terrorism.

Dieudonne originated the quenelle, which critics say is a modified Nazi salute. French Prime Minister Manuel Valls called it an “a gesture of anti-Semitic hate” and has described Dieudonne as a “professional anti-Semite.”

Under Valls, Dieudonne was forced to cancel one tour and is facing criminal and financial charges, ranging from incitement to hatred to tax evasion and building violations.