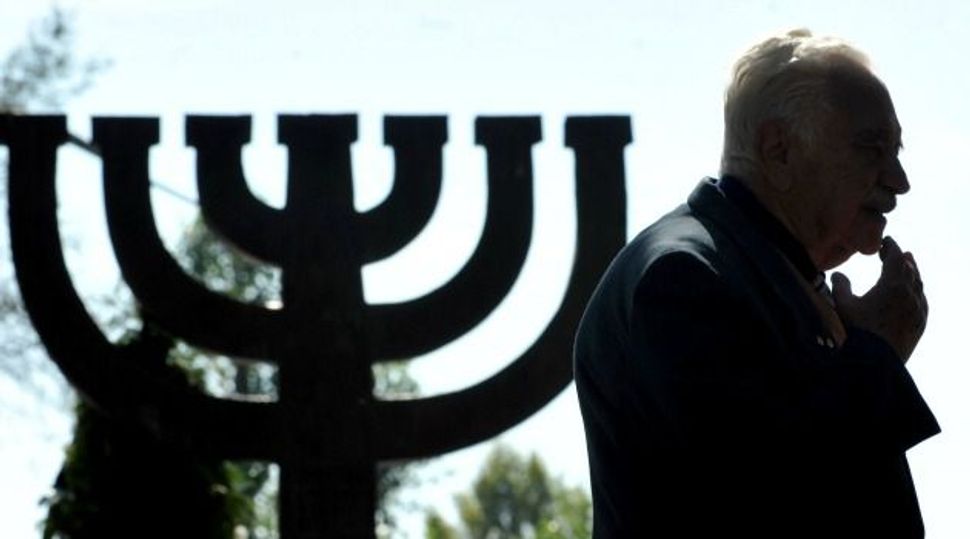 An elderly man attends a ceremony at the Babi Yar memorial to Holcaust victims. The monument was defaced with swastikas for the third time in four months. Image by getty images

For the third time in recent months, Nazi swastikas were discovered on the Babi Yar memorial monument for Holocaust victims in Kiev.

The latest incident was discovered Jan. 30 by employees of the National Historical Memorial Site in Babi Yar, where Nazi troops killed more than 33,000 Jews in 1941.

The swastikas were daubed on a monument shaped like a menorah that stands at the entrance to the site, the news website evreiskiy.kiev.ua reported.

The incident closely follows commemorations in Ukraine and across the world on Jan. 27, International Holocaust Memorial Day, which this year attracted considerable media attention because it was the 70th anniversary of the Red Army’s liberation of the Auschwitz-Birkenau concentration and death camp.

Similar graffiti was found in Babi Yar in November and in October, directly after the annual commemoration of the massacre there.

The incident in Ukraine comes amid a spate of anti-Semitic vandalism in Europe last week, the included incidents in the former Nazi camp of Mauthausen in Austria and the fence of a Jewish cemetery in Poland.

A fourth incident in France was reported on Sunday on the website of the Israel-based Coordination Forum for Countering Anti-Semitism.

It involved a privately-owned automobile in Paris, which on Jan. 29 was photographed after unknown parties wrote on it with white paint: “Jews to the oven” and painted a Star of David on its hood.

The report did not say who owns the car.

An earlier incident in France which occurred Jan. 30 involved anti-Semitic graffiti that was sprayed on the walls of a Catholic private school in Nancy in the country’s northeast. The mayor of Nancy said that a swastika, stars of David and the word “Jew” were sprayed on the school’s fence, the news website ici-c-nancy.fr reported.