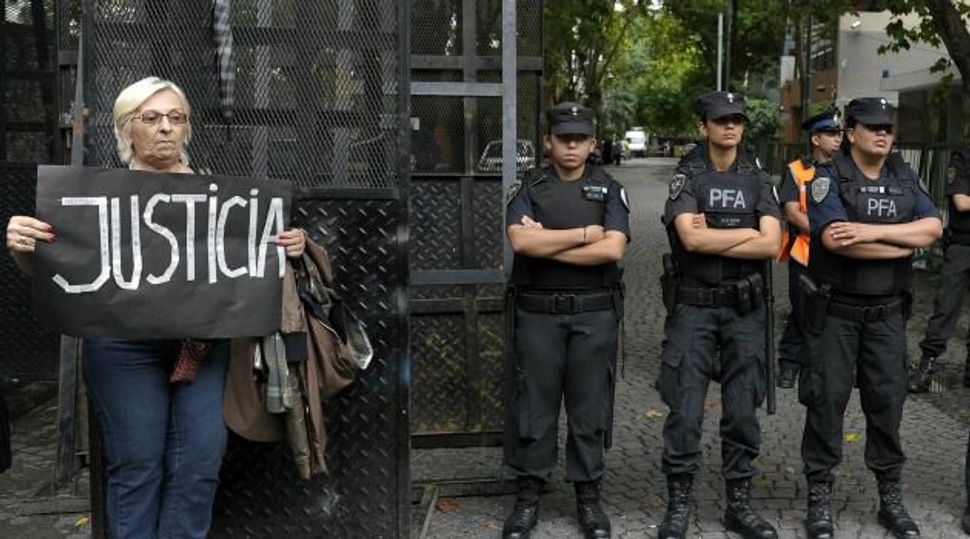 (Reuters) — Anita Weinstein was on the second floor of a Jewish community center in Buenos Aires on July 18, 1994 when the ceiling and walls collapsed from the force of a truck bomb outside.

Disoriented, and terrified by the screaming and sudden darkness, she still managed to climb down through the rubble and call her daughter to tell her she was OK.

The emotions of that day came rushing back two weeks ago, when her daughter called with news that Alberto Nisman, the prosecutor investigating the bombing at the Argentine Israelite Mutual Association (AMIA), had been found dead with a bullet to the head in his Buenos Aires apartment.

“It was the same lack of comprehension, like my head is somewhere and my body is somewhere else,” Weinstein said. “And then, once that passed, the same fear that we may never know what really happened.”

Survivors of the AMIA bombing and many other Argentines are losing hope that either Nisman’s death or the 1994 attack will ever be solved, pointing to their government’s often erratic behavior and a long national history of murky political crimes for which no one gets punished.

Many at the AMIA, which has been rebuilt, refer to Nisman as “the 86th death” – a reference to the 85 who died in what has been called the deadliest attack on a Jewish target since World War Two, and Nisman’s own dedication to the cause.

Nisman spent almost a decade building a case that Iran was behind the AMIA bombing – which Iran has rigorously denied.

Just days before he was found dead on Jan. 18, Nisman accused President Cristina Fernandez of trying to stymie his investigation in order to receive economic favors from Iran.

Fernandez has dismissed that accusation as absurd and says she believes Nisman was murdered as part of a conspiracy involving rogue spies. But she has not offered any evidence, no one has been arrested in connection with such a crime, and investigators still say it may have been a suicide.

In a poll released last week, 72 percent of Argentines said they believed Nisman’s death will remain unsolved and 62 percent did not believe the government’s accounting of what happened.

“Those numbers might seem high … but it’s a place with a history of different governments being involved in apparent cover-ups,” said Nicolas Shumway, author of two books on Argentine history and a dean at Rice University.

Fernandez herself, in a meandering 2,800-word Facebook post on Jan. 22 regarding Nisman’s death, referred to four politically related “suicides” – the quotation marks were hers – that “were never clarified.”

They included a suspect in an arms scandal involving the government at the time who, like Nisman, died of a gunshot in his home in 1998; and a businessman and key suspect in a separate corruption case, found hanged that same year.

One of the most notorious Argentine mysteries is the 1995 death of then-President Carlos Menem’s son in what his government long insisted was a helicopter accident. Years passed before Menem publicly admitted he believed his son was murdered, for reasons that remain murky.

With little faith in the judicial system or their politicians, some at the AMIA prefer to focus on ensuring the victims are never forgotten.

The first names of the 85 dead are sketched on the heavily fortified barrier wall outside the building.

“Remembering the pain that will not cease,” an inscription reads.

A separate plaque inside commemorates the 29 dead from a separate bombing of the Israeli embassy in Buenos Aires in 1992.

Despite those attacks, Nisman’s death, and incidents such as anti-Semitic posters plastered in a Buenos Aires neighborhood this weekend, Weinstein and many others at the AMIA said they felt generally strong support from Argentine society.

They pointed to large turnout at events supporting the AMIA in recent years, including last week’s commemoration of International Holocaust Remembrance Day which drew hundreds, including representatives from Congress and City Hall.

In 2010, Buenos Aires archbishop Jorge Bergoglio – who later became Pope Francis – visited the AMIA and called the bombing “one more link in the chain of pain and persecution that God’s chosen people have suffered throughout history.”

Argentina has Latin America’s largest Jewish community, at an estimated 250,000 people, many descended from immigrants who fled oppression in Europe in the early 20th century for what was then one of the world’s richest countries.

Numerous national traumas in years since, including an oppressive dictatorship that killed thousands in the 1970s, convinced many Argentines of the need to speak out against terror and injustice, no matter who is targeted, Weinstein said.

“Through difficult experiences … we’ve learned the value of democracy, and solidarity,” she said. “People see what happened here as an aggression against all of Argentine society.”