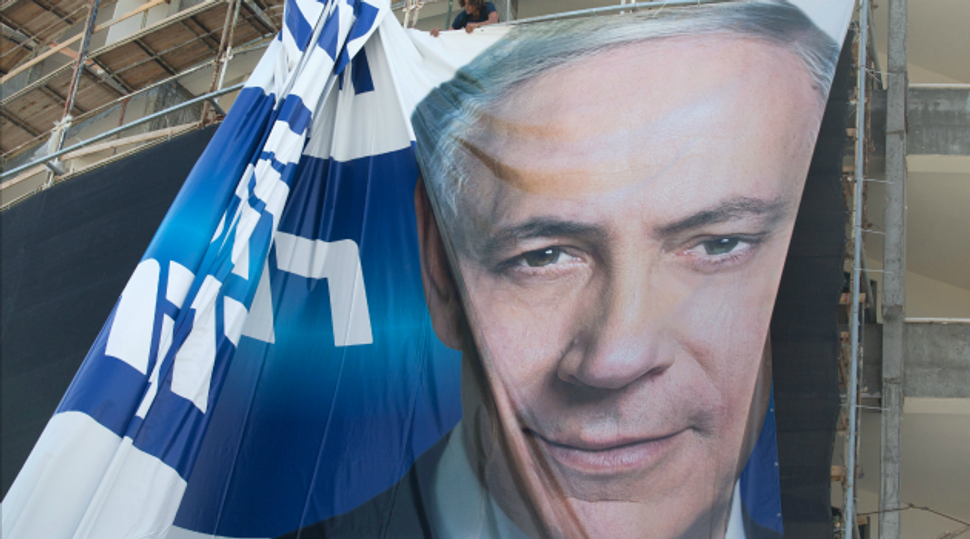 (JTA) — Against a soundtrack of dramatic music, Israeli Prime Minister Benjamin Netanyahu lists his government’s security accomplishments, declaring over the shouts of opposition lawmakers that his Likud Party has stopped terrorists, stood up to Iran and secured Israel’s borders.

Released Wednesday, the video is the latest in a string of Likud campaign ads to hammer home a single message: When it comes to Israel’s security, no leader is as trustworthy as Netanyahu.

Commanders for Israel’s Security is hoping to change that thinking. The group – a collection of 186 retired generals, including former chiefs of the Mossad and the Israel Defense Forces – says nothing would be worse for Israel’s defense than a Netanyahu victory in Tuesday’s election.

Members charge that Netanyahu missed a key opportunity to improve Israel’s security posture after the conflict in Gaza last year, and say he lacks the mettle to handle the dispute with the Palestinians and improve relations with the United States.

“Bibi in his whole life hasn’t made decisions, doesn’t initiate anything,” said Brig. Gen. (ret.) Asher Levi, using Netanyahu’s nickname. “At the end of Protective Edge we had an extraordinary chance to make some kind of regional pact with the Gulf states, Saudi Arabia and Egypt to fight Iran and extremist Islam. He didn’t do it.”

Despite his efforts to portray himself as the leader best poised to ensure the security of Israel, Netanyahu has had to fend off increasingly vocal criticism from former leaders of the defense establishment.

At a rally in Tel Aviv last week, Dagan issued a harsh rebuke of Netanyahu’s leadership before a crowd of 40,000. Yuval Diskin, the former director of the internal security service Shin Bet, has come out against Netanyahu’s handling of the Iranian nuclear threat and the Palestinian conflict. Former Shin Bet director Yaakov Peri, former IDF Intelligence Commander Amos Yadlin and former head of the IDF Southern Command Yoav Galant have all joined opposing parties ahead of the election.

“Israel is today at a low point unlike any since the state’s founding,” former Mossad director Shabtai Shavit says in a video released in late February by Commanders for Israel’s Security. “Eternal war is not a strategy.”

The group came together last year to praise Netanyahu’s “level-headed leadership” in the Gaza conflict and urge him to leverage the cease-fire to convene a regional peace conference. When Netanyahu ignored their advice, the group turned on him.

Commanders for Israel’s Security says Israel needs to set a final border with the Palestinians, cooperate on common interests with Arab states and improve relations with the United States.

Likud has brought its own security credentials to bear in standing its ground against the generals. Defense Minister Moshe Yaalon, himself a former army general, said the group offered false hope “that always costs us in blood.” He further claimed that the anti-Netanyahu generals weren’t familiar with the particulars of Israel’s current security challenges.

“This secure calm isn’t a given,” Yaalon said at a news conference Wednesday. “It’s a function of responsible leadership and thoughtful policy. It’s not a result of inaction. It’s a result of much action. And they give us so many suggestions – why aren’t we negotiating? And then, when we do negotiate, they blame us unfairly.”

Despite its opposition to Netanyahu, the generals insist they are not a partisan group. It’s also unclear how much influence they hold over an electorate that polls show is more focused on socioeconomic issues.

“The sense of security is high, so the feeling is that Israel isn’t in immediate danger,” said Tamar Hermann, a senior fellow at the Israel Democracy Institute senior fellow and an expert on Israeli public opinion. “People think [Netanyahu] didn’t deal poorly with security, and it doesn’t seem to be the most important issue.”