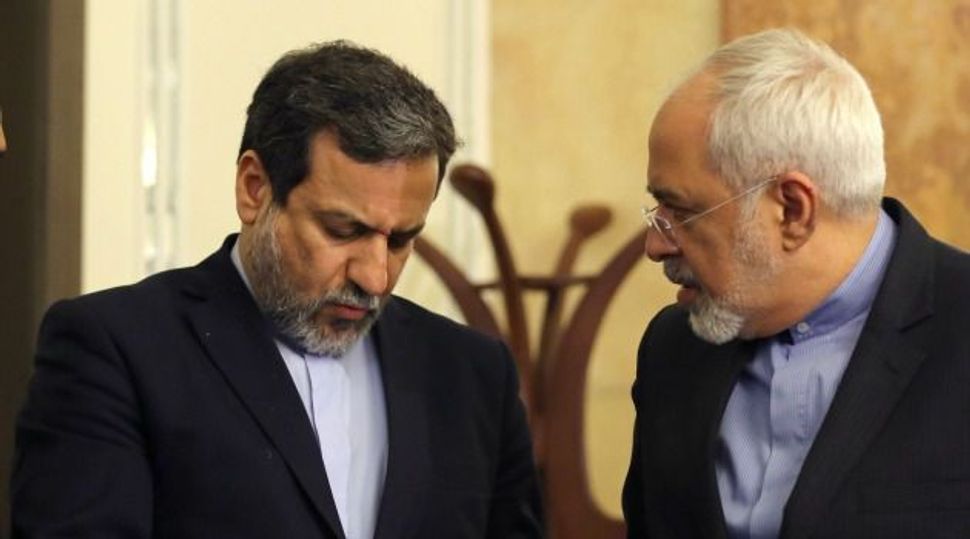 Iranian negotiators discuss nuclear deal with the U.S. and other world powers. Image by getty images

(Reuters) — As the United States and Iran come closer to a historic nuclear deal, many U.S. states are likely to stick with their own sanctions on Iran that could complicate any warming of relations between the long-time foes.

In a little known aspect of Iran’s international isolation, around two dozen states have enacted measures punishing companies operating in certain sectors of its economy, directing public pension funds with billions of dollars in assets to divest from the firms and sometimes barring them from public contracts.

In more than half those states, the restrictions expire only if Iran is no longer designated to be supporting terrorism or if all U.S. federal sanctions against Iran are lifted – unlikely outcomes even in the case of a final nuclear accord. Two states, Kansas and Mississippi, are even considering new sanctions targeting the country.

Though U.S. states have often coordinated their measures with federal sanctions on Iran, their divestment actions sometimes take a tougher line on foreign firms with Iran links than is the case under federal policy.

“Our investment sanctions are not tied in any way to President Obama’s negotiatons with the Iranians,” said Don Gaetz, a Republican Florida state senator who sponsored legislation in 2007 punishing companies with investments in Iran’s energy sector.

“They would have to change their behavior dramatically and we would not be necessarily guided by President Obama or any other president’s opinion about the Iranians,” Gaetz said.

(Map of U.S. states with sanctions against Iran: http://graphics.thomsonreuters.com/15/04/IRAN-NUCLEAR-STATES.jpg)

A final accord, which is still being negotiated ahead of a June 30 deadline, would likely lift U.S. sanctions on Iran’s crude oil sales to other countries and loosen restrictions on Iran’s financial system. Federal sanctions on Iran tied to issues such as human rights and terrorism would remain in place.

Among around a dozen states contacted directly by Reuters, legislators in Georgia, Florida, and Michigan said they had no intention of changing their Iran policies even in light of a federal deal. State officials in Connecticut and Illinois said new local legislation would be needed to change their divestment policies, even if a deal were signed.

Officials in New York and Oregon told Reuters they would look to changes in law at the federal level in the case of a nuclear deal to determine how it would affect their policies.

Officials at Iran’s mission to the United Nations did not immediately respond to a request for comment from Reuters on the state policies. White House spokeswoman Bernadette Meehan did not respond directly to a Reuters query about states’ sanctions policies, but stressed that only sanctions related to Iran’s nuclear program would be affected by a deal.

The first divestment campaigns gathered steam in 2008 and 2009, and received a federal stamp of approval in 2010 with passage of the Comprehensive Iran Sanctions, Accountability, and Divestment Act, which encouraged states to pass such measures.

The divestment measures typically enjoy broad bipartisan support within the legislatures, and have been signed into law by Republican and Democratic governors alike.

Critics of the laws say they are an unnecessary interference in a crucial area of U.S. policy by states that usually have little expertise in foreign affairs.

“Foreign policy is uniquely a case where the government needs to act with one voice,” said William Reinsch, president of the National Foreign Trade Council, which represents major U.S. companies and advocates against unilateral sanctions.

Foreign companies are the main target of the rules since U.S. firms are largely barred from working in Iran by federal law.

Florida’s law led to the State Board of Administration (SBA), which oversees Florida public investments, pulling more than $1.3 billion out of companies such as PetroChina and Russia’s Gazprom for their involvement in either Sudan or Iran. As of 2014, the SBA had $177 billion in assets.

Like Florida, Michigan was an early adopter of divestment policies targeting Iran. It has divested $185 million of its pension funds from companies including Royal Dutch Shell , Vodafone, HSBC, and Nokia for their activities in Iran.

In 2013 and 2014 Michigan divested $45 million from Becton Dickinson and Co., a U.S. medical supplies company that sells to Iran legally under federal regulations.

A Becton Dickinson spokesman said the firm was unaware it was a target of divestment by Michigan until contacted by Reuters. It said in a statement that its trade with Iran is authorized by the U.S. Treasury Department’s Office of Foreign Assets Control, which oversees federal sanctions.

Marty Knollenberg, a Michigan state senator who sponsored a divestment bill in 2008, said the legislation was based in part on model legislation provided by the American Israel Public Affairs Committee (AIPAC), a lobbying group that advocates for further sanctions on Iran.

Richard Nephew, the former principal deputy coordinator for sanctions policy at the U.S. State Department, said the main losers in divestment actions are the companies and local governments, rather than Iran or other target countries.

“The degree to which such decisions can be made at lower government levels than the federal government generally makes the United States a more complicated, unattractive place to do business,” said Nephew, now with the Columbia University Center on Global Energy Policy in New York.

“This is a feel-good measure that, in the end, probably doesn’t feel all that great given the costs it imposes at home.”