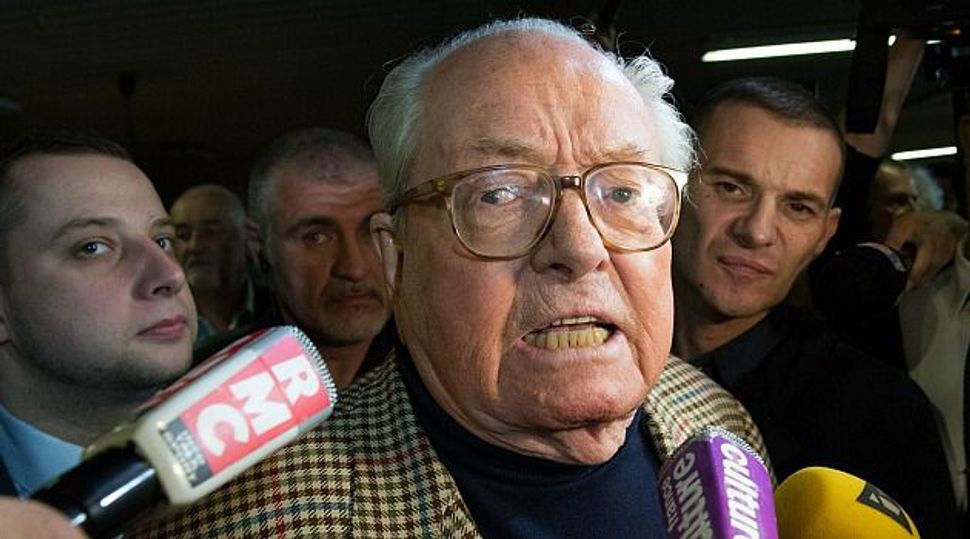 (Reuters) — Jean-Marie Le Pen, founder of France’s far-right National Front, said on Monday he would not seek its ticket to stand in regional polls, taking some of the sting out of a damaging public row with his daughter Marine, the party’s current leader.

But the 86-year-old former paratrooper told Le Figaro in an interview that he was disappointed by his daughter and would not quit politics, showing that the family feud that could emerge as a threat to the FN’s bid for power is not necessarily over.

Marine Le Pen, who in 2011 took over as FN party leader from her father, has been trying to persuade him to retire both from the December regional polls and from politics altogether.

Jean-Marie Le Pen, who has been convicted for incitement to racial hatred, last week defended his view that Nazi gas chambers were a mere “detail” of war. That prompted his daughter to demand that his role in the party be discussed at a meeting of FN executives on Friday.

Jean-Marie Le Pen said in a statement that he will not stand in the south-east Provence-Alpes-Côte d’Azur region because the party was at risk of being “dangerously weakened” over what he called a severe but unjustified crisis over the comments he made last week.

FN deputy leader Florian Philippot, a close ally of Marine Le Pen who last week even suggested her father could be thrown out of the party, told iTele his move was “a wise decision.”

In a sign of his family’s strong grip on the party, Le Pen said the best replacement candidate would be his grand-daughter Marion Marechal-Le Pen. A source close to the party leadership said she would now seek her party’s ticket to run for Provence-Alpes-Côte d’Azur.

Marion is seen as linked with the socially conservative side of the party. Whereas Marine for example did not publicly criticize a 2013 law permitting same-sex marriage in France, Marion was firmly against it.

Opinion polls see Marine Le Pen as likely to make it to the second round of 2017 presidential elections but not win. How she handles relations with her father will be one of the key factors to how her party fares in 2017.

Asked if he felt betrayed by his daughter, Le Pen, who remains the Front’s honorary president and will retain his seat in the European Parliament, told Le Figaro Magazine: “Betrayed would be going a bit far, but let’s say I’m disappointed.”