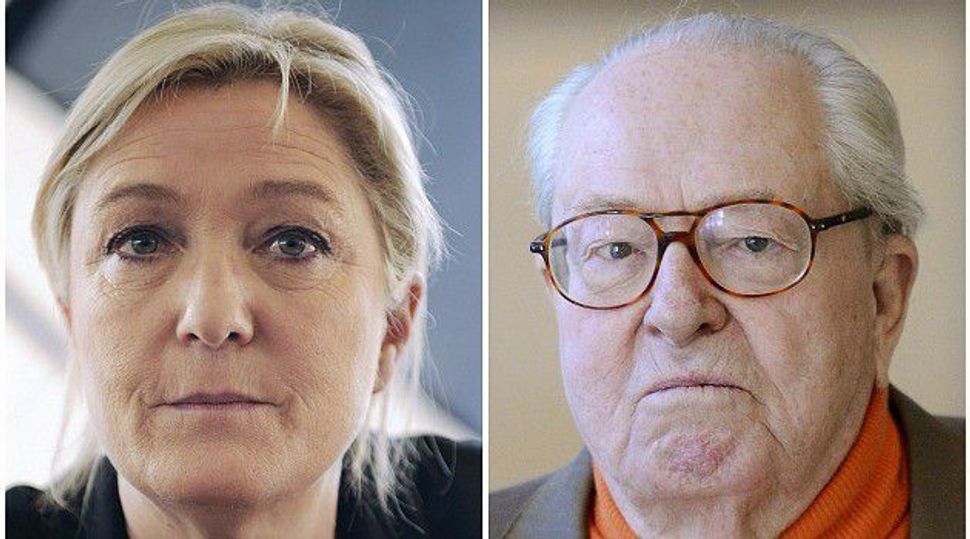 (Reuters) — National Front founder Jean-Marie Le Pen vowed in a Reuters interview to stay in politics until he dies, reiterating comments that show he is not backing away from a family feud that is complicating the far-right’s quest for power in France.

Following comments he made last week over Nazi gas chambers and French war-time leader Philippe Petain, which triggered a crisis within the National Front, the 86-year-old former paratrooper renewed his defense of Petain.

Le Pen, who presided over the FN for decades before handing the reins to daughter Marine in 2011, said Petain, whose administration took part in sending Jews to concentration camps, had the legitimacy of being backed by parliament at the time.

“Therefore, I don’t think at all that (Marshal Petain) was a traitor. I think he was very severely punished. I thought it was an injustice,” he said.

While her father had been content with attracting protest votes without actually targeting power, Marine Le Pen has tried to rid the anti-immigrant party of its anti-Semitic image and widen its voter appeal as she readies a bid for the French presidency in 2017.

In doing this, one of the hurdles was always going to be how to handle her outspoken father, who uses his title of honorary president of the party to lob regular controversy into the French political debate.

He agreed on Monday to give up on seeking the party’s ticket to stand in regional polls after the controversy last week over his defense of past comments that Nazi gas chambers were a “detail of history.”

While that took some of the sting out of the damaging public row, he insisted in the Reuters interview that he will not heed to his daughter’s other demand – that he quit politics altogether.

“I’ll be a member of the European Parliament for four more years so I am not retiring at all,” he said in an interview in his EU lawmaker office in Brussels. “I’ll go till the end or as long as the ‘Boss’ doesn’t call me back.”

Asked about the possibility that he could face sanctions when the party leadership meets in the coming weeks to discuss his WWII comments, Le Pen, who still enjoy a lot of support among party veterans, was dismissive.

“I can’t see who at the National Front can imagine sanctioning the founder who, for 40 years, had led the political party they might have joined two or three years ago. That’s laughable. And they would need a motive. For what motive? Because I gave an interview to a newspaper? This cannot be serious,” he said.

Polls suggest his daughter could make it into the second-round run-off of a presidential election but is unlikely to win.