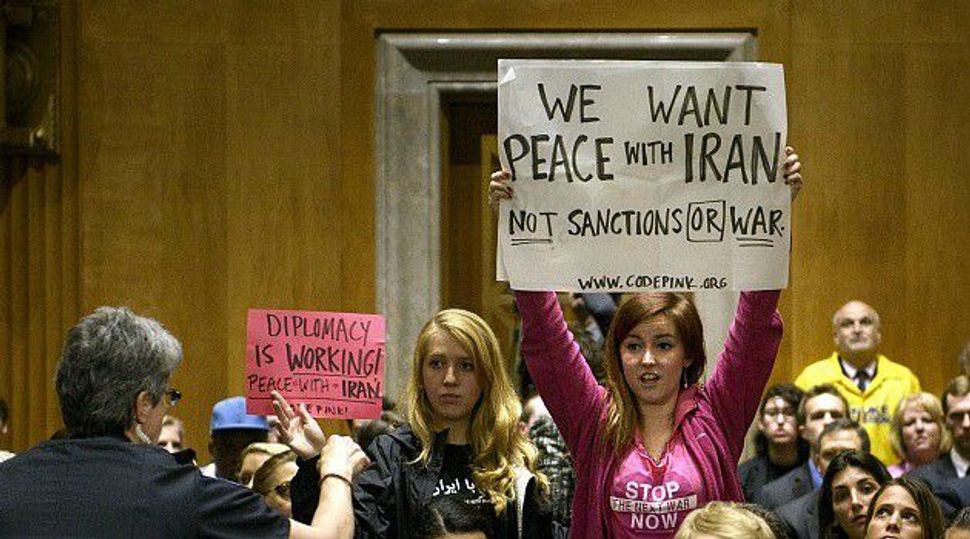 (Reuters) — A compromise allowing the U.S. Congress to vote on a nuclear deal with Tehran may prompt Iranian negotiators to drive a harder bargain, but does not drastically weaken President Barack Obama’s ability to deliver on a final agreement.

For months Obama resisted attempts led by Republicans and some Democrats to open an agreement with Iran to congressional approval. On Tuesday he backed down in the face of mounting bipartisan support for the bill, which gives Congress at least 30 days to review a final deal during which time Obama would be unable to waive or suspend many U.S. sanctions.

Negotiators for Iran and six major powers are trying to ensure Iran does not acquire an atomic bomb by securing an agreement by June 30 under which Iran would curb its nuclear program in exchange for relief from international sanctions.

“If I were an Iranian negotiator, I would walk into that room and say ‘you told us all along you were going to stop legislation,’” said Richard Nephew, a former U.S. negotiator with Iran now at Columbia University.

“‘How can you guarantee us that we’re not going to have this problem when we bring the deal forth?’”

“Will it be fatal? No,” he added. “It’s going to make things a lot harder, a lot more complicated, a lot more difficult for the (U.S.) negotiating side.”

While it is largely a U.S.-Iranian affair, the talks also include Britain, China, France, Germany and Russia. The European Union is also a key player in the process, which resulted in a preliminary deal on April 2 after marathon talks.

Since then, sharp differences in interpretation over the terms have emerged, with Iran saying sanctions must be lifted immediately after a deal is reached and Washington insisting the sanctions will be phased out over a longer period.

However, there are ways to square that circle.

It will take Iran some time to take steps such as shutting down and disconnecting some of its centrifuges, which can produce fissile material for an atomic bomb.

Any eventual nuclear agreement could be written with its implementation scheduled to begin, say, 60 days later, giving Iran time to prepare its nuclear actions and allowing the U.S. congressional process to play out.

If Congress were ultimately to reject any Iran deal in a “joint resolution of disapproval,” Obama still has the ability to veto it. He would only need to secure 34 votes in the Senate to sustain his veto and prevail, a test analysts said he was likely to meet.

Senators from Obama’s Democratic Party would likely be less willing to undo what would be a historic foreign policy achievement than they were to back this week’s move for congressional oversight.

“My guess is that the administration will have a strong chance of putting together a block of at least 34 senators,” said Robert Einhorn, another former U.S. negotiator with Iran who is now at the Brookings Institution think tank.

Last-minute concessions by Republicans in the Senate Foreign Relations Committee cut the review period to 30 days from the original 60 days and removed a requirement that Obama certify that Iran is not supporting terrorism against the United States.

The bill requires the administration to send Congress any accord within five days of its conclusion. It bars the White House from easing sanctions imposed by Congress for at least 30 days after that, but Obama could unilaterally ease sanctions if Congress takes no action.

U.S. Secretary of State John Kerry, who has led the U.S. team, said he was confident of the administration’s ability to negotiate a deal, and Germany and the European Union voiced optimism the congressional move would not prevent an agreement.

White House spokesman Eric Schultz said the bill would “codify the legitimate congressional oversight of the deal in a way that gives our negotiators the time and space they need to finalize this agreement by the end of June.”

Einhorn said the administration aims to persuade Iran that while there is deep skepticism within Congress about a nuclear deal, the White House has the constitutional tools “to defeat any effort by the Congress to undermine the agreement.”

“This vote will provide some talking points for Iranian hard-liners. They will say ‘look what happened. The Obama administration got rolled. The administration could get rolled at the end of June’,” he said.

“But I think that sophisticated Iranians will understand the (political) realities and wouldn’t draw the conclusion that the administration can’t deliver,” he added.