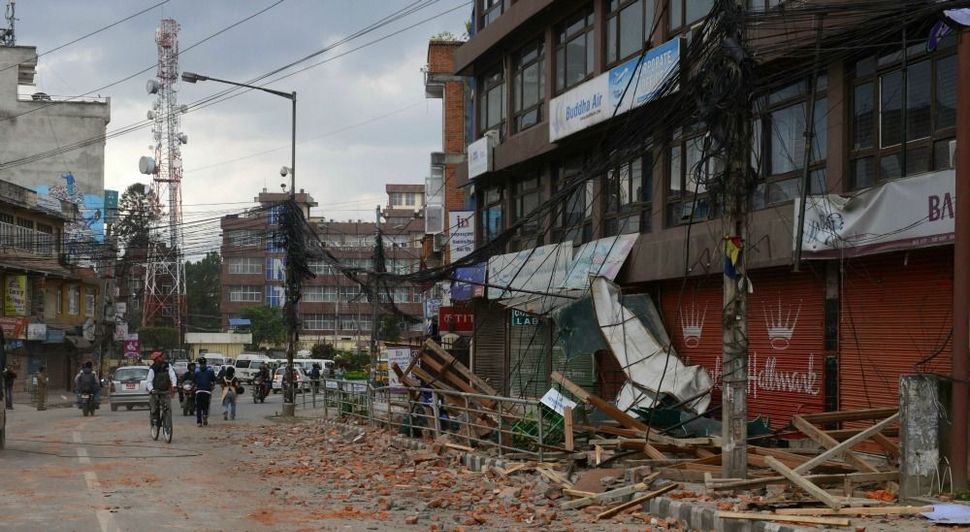 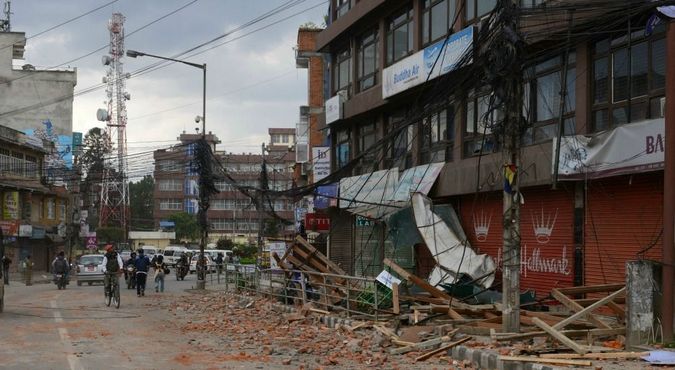 (Reuters) — A powerful earthquake struck Nepal and sent tremors through northern India on Saturday, killing hundreds of people, toppling a 19th-century tower in the Nepalese capital Kathmandu and triggering a fatal avalanche on Mount Everest.

There were reports of devastation in outlying areas of the Himalayan country after the quake struck with a magnitude of 7.9, its epicenter 50 miles (80 km) east of Nepal’s second largest city, Pokhara.

Around 300,000 foreign tourists were estimated to be in various parts of Nepal for the spring trekking and climbing season in the Himalayas, and officials were overwhelmed by calls from concerned friends and relatives.

There was no immediate word on American or Israeli casualties. Nepal is a popular destination for Israeli tourists, especially young backpackers, and mountain climbers.

An Israel foreign ministry spokesman said embassy staff in Kathmandu were seeking to assess the situation.

The worst quake to hit the impoverished Himalayan nation in 81 years also caused damage in neighboring Indian states and Bangladesh. The quake was shallow, intensifying the amount of energy released over a relatively small area.

A police spokesman said the death toll had reached 900 in Nepal according to an initial estimate, most from the Kathmandu Valley. There was little information coming from the outlying areas of the mountainous country and helicopters were circling overheard to get a better sense of the damage.

“Hundreds of people are feared dead and there are reports of widespread damage to property. The devastation is not confined to some areas of Nepal. Almost the entire country has been hit,” said Krishna Prasad Dhakal, deputy chief of mission at Nepal’s Embassy in New Delhi.

A tourism official said eight people were killed by an avalanche unleashed by the earthquake that swept through the Everest Base Camp for climbers of the world’s highest mountain.

“The toll could go up, it may include foreigners as well as sherpas,” Gyanendra Shrestha said.

A collapse in communications was hampering efforts to launch relief efforts across Nepal’s rugged terrain.

“We are totally cut off from most parts of our country,” said Ram Narayan Pandey of the Nepal Disaster Management Authority, who was coordinating relief efforts from Kathmandu.

The death toll in northern India rose to at least 12, with six killed in house collapses in Uttar Pradesh and six more dying in Bihar further east, according to government officials. One person died in Bangladesh.

A 19th century tower collapsed in Kathmandu when the quake struck shortly before noon local time. A policeman said that up to 200 people had been trapped there.

The Dharara Tower, built in 1832, was a landmark that had been open to visitors for the last 10 years and had a viewing balcony.

A stump just 10 meters (33 feet) high was all that was left of the 14-story structure. Several bodies were brought away from the ruins.

At the main hospital in Kathmandu, people with broken limbs and arms were being rushed in for treatment. Crowds and volunteers formed human chains to clear the way for ambulances to bring in the injured.

“There are people everyone where in the corridors and out in the field,” said a Reuters reporter.

Television news footage showed people being treated on the streets outside hospitals and several bodies lying in rows, covered in blankets.

The Everest avalanches, first reported by climbers, raised fears for those on the world’s loftiest peak a year after a massive snowslide caused the deadliest incident yet there.

Romanian climber Alex Gavan said on Twitter that there had been a “huge avalanche” and “many, many” people were up on the mountain. “Running for life from my tent,” Gavan said. “Everest base camp huge earthquake then huge avalanche.”

Another climber, Daniel Mazur, said Everest base camp had been “severely damaged” and his team was trapped.

“Please pray for everyone,” he said on his Twitter page.

An avalanche in April 2014 just above the base camp on Mount Everest killed 16 Nepali guides. April is one of the most popular times to scale Everest before rain and clouds cloak the mountain at the end of next month.

Tremors were felt as far away as New Delhi and other northern cities in India, with reports that they had lasted up to a minute.

“Massive tremors have been felt here in Delhi and several other parts of India,” said a newsreader on NDTV in Delhi.

“You can see pictures of our Delhi studios, where the windows rattled and everything shook for a very long time, for a minute perhaps or longer,” she said as footage showed studio ceiling camera lights shaking.

The U.S. Geological Survey said the quake, initially measured at 7.7 but upgraded to 7.9 magnitude, struck 80 km (50 miles) east of Pokhara. It was only 2 km deep.

“We are in the process of finding more information and are working to reach out to those affected, both at home and in Nepal,” tweeted Indian Prime Minister Narendra Modi.

He convened a high-level meeting with ministers and top officials to assess the situation. There were no preliminary reports of damage anywhere in India, Home Minister Rajnath Singh told the Press Trust of India.