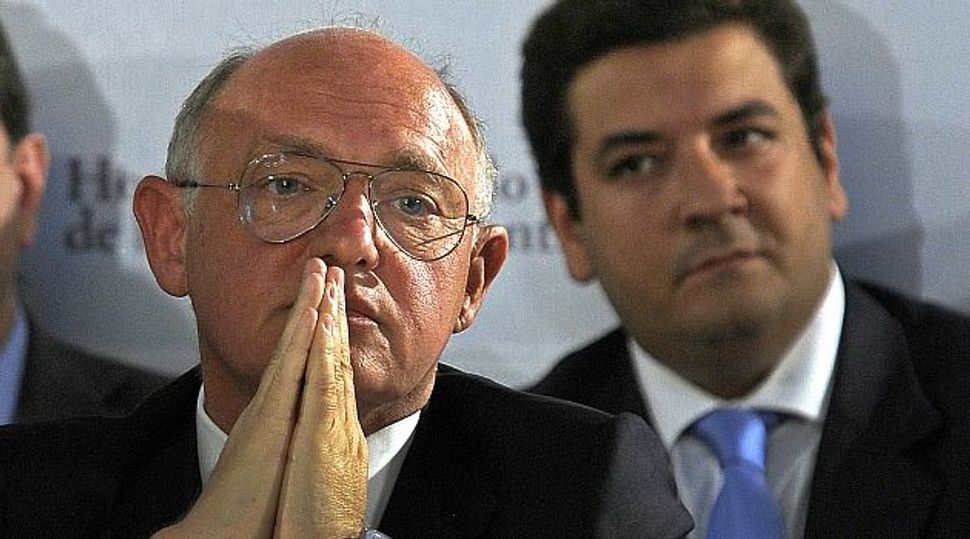 Argentina’s foreign minister has resigned his membership in the Buenos Aires AMIA Jewish Center that was targeted by a terrorist bomb in 1994.

Hector Timerman, who is Jewish, sent a letter on Tuesday to the president of AMIA expressing his “indeclinable resignation” due to the “obstructionist actions” that the institution has made against a deal with Iran to investigate the attack.

Timerman, the first Jewish foreign minister in Argentina’s history, said after his resignation to AMIA that the Argentinian Jewish political umbrella DAIA also has lost the right to represent him. “I withdrew from the DAIA the right to speak on my behalf,” he said.

“The decision was motivated by the certainty that with their obstructionist actions both institutions continue hindering the investigation of the terrorist criminal attack which occurred on July 18, 1994, while at the same time they are feeding, maybe unintentionally, campaigns by those who are willing to use such a strategy for purposes which are contrary to the national interest,” Timerman wrote in his resignation letter.

In his more than 1,000-word letter addressed to AMIA president Leonardo Jmelnitzky, which also was sent to the media from his personal e-mail account, Timerman criticized AMIA and DAIA for blocking a deal with Iran that the foreign minister signed on Jan. 27, 2013 to set up a joint “truth commission,” prompting condemnations from members and leaders of Jewish communities in Latin America and beyond.

According to the late prosecutor Alberto Nisman, Argentina’s president Cristina Fernandez de Kirchner decided to “not incriminate” former senior officials of the Islamic Republic and tried to “erase” their alleged roles in planning the bombing. Timerman also was included in this accusation by Nisman against the current government, which was thrown out by three Argentine courts in recent weeks.

Timerman’s resignation letter, which was published by the government’s national news agency, ends with harsh criticism saying that he resigned from an institution “that we were once proud of but now puts us to shame.”

Timerman is well-known in the Jewish community for his previous career as a journalist and also as the son of newspaper editor Jacobo Timerman, who was kidnapped in 1970 by the military dictatorship and later released in 1979. In December 2010, Timerman issued an official government statement recognizing a unilateral Palestinian state, joining Brazil and triggering mass Latin American support for Palestinian Authority President Mahmoud Abbas. On January 2015 two AMIA members requested that Timerman be expelled as a member of AMIA.