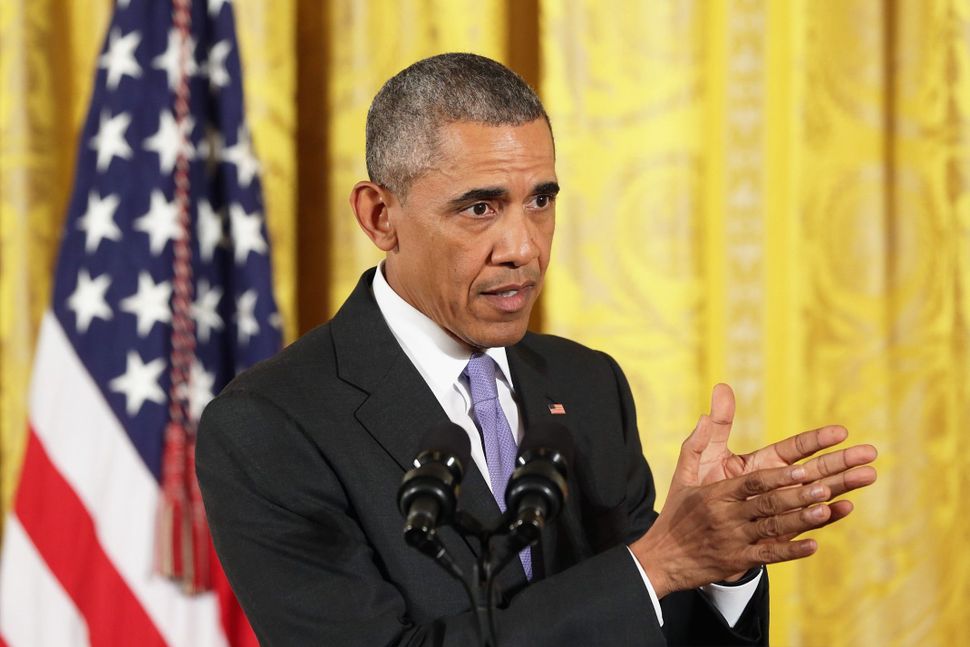 President Barack Obama, seeking to sell the Iran nuclear deal to skeptical U.S. lawmakers and the American public, insisted on Wednesday that the landmark agreement was the best way to avoid a nuclear arms race and more war in the Middle East.

Obama made his case in a nationally televised news conference responding to critics at home and abroad after Iran and six world powers sealed an accord in Vienna on Tuesday to restrict Tehran’s nuclear program in exchange for sanctions relief.

“Without a deal,” Obama said, “there would be no limits to Iran’s nuclear program and Iran could move closer to a nuclear bomb … Without a deal, we risk even more war in the Middle East.”

Obama said that if the United States does not seize the opportunity for a deal, “future generations will judge us harshly.”

The agreement is a political triumph for Obama, who has made outreach to America’s enemies a hallmark of his presidency, but it is also seen as his biggest foreign policy gamble since taking office in 2009.

Obama is now spearheading an intense White House push to counter Republican critics in Congress and reassure nervous U.S. allies such as Israel and Saudi Arabia.

Critics say the deal contains loopholes, especially in inspection procedures that Iran could exploit, and will provide Tehran with an infusion of unfrozen assets to fund its proxies in sectarian conflicts ranging from Syria to Iraq to Yemen.

Obama argued that a “snap-back” mechanism contained in the agreement to restore sanctions if Iran cheated would ensure it faced real consequences for not keeping its nuclear commitments.

But he acknowledged that although he hopes the international deal will encourage Iran to rein in its aggressive conduct in the region, he was not betting on a change.

“Without a deal, the international sanctions regime will unravel, with little ability to re-impose it,” he said. ” With this deal, we have the possibility to peacefully resolve a major threat to regional and international security.”

Obama said there would have been a risk of more fighting in the Middle East without a deal and that other countries in the region would feel compelled to pursue their own nuclear programs “in the most volatile region in the world.”

Obama said he expects a robust debate in Congress over the deal, which he said cuts off all of Iran’s pathways to a nuclear weapons program.

Under the agreement, sanctions imposed by the United States, the European Union and the United Nations will be lifted in return for Iran agreeing long-term curbs on a nuclear program that the West has suspected was aimed at creating a nuclear bomb. Iran says the program is for peaceful purposes.

Obama has run into a storm of accusations from Republican lawmakers and close U.S. ally Israel that he gave away too much to Tehran.

Obama has vowed to veto any effort to block the deal and though he faces a tough challenge in the Republican-controlled Congress he is expected to prevail.

He said he does not anticipate Republicans in Congress will rally around the nuclear pact, but said that if lawmakers vote based on the facts the majority of them should approve the deal.

The agreement, which marks the biggest step toward rapprochement between Iran and the West since the 1979 Islamic Revolution, is a major legacy-defining achievement for Obama as well as his best hope for salvaging an otherwise shaky record in the Middle East.

Obama said Israel, widely assumed to be the Middle East’s only nuclear-armed state, had legitimate concerns about Iran’s threat to its security but insisted that danger would be compounded if Iran acquired a nuclear weapon.

Congress will have 60 days to review the agreement. Republicans have majorities in both the House of Representatives and the Senate but they would need the support of dozens of Obama’s fellow Democrats to sustain a “resolution of disapproval” that could cripple a deal.

The odds are slim that they could muster enough support to overrule an Obama veto, though if he has to resort to such a move it would underscore the deep divisions in Washington.