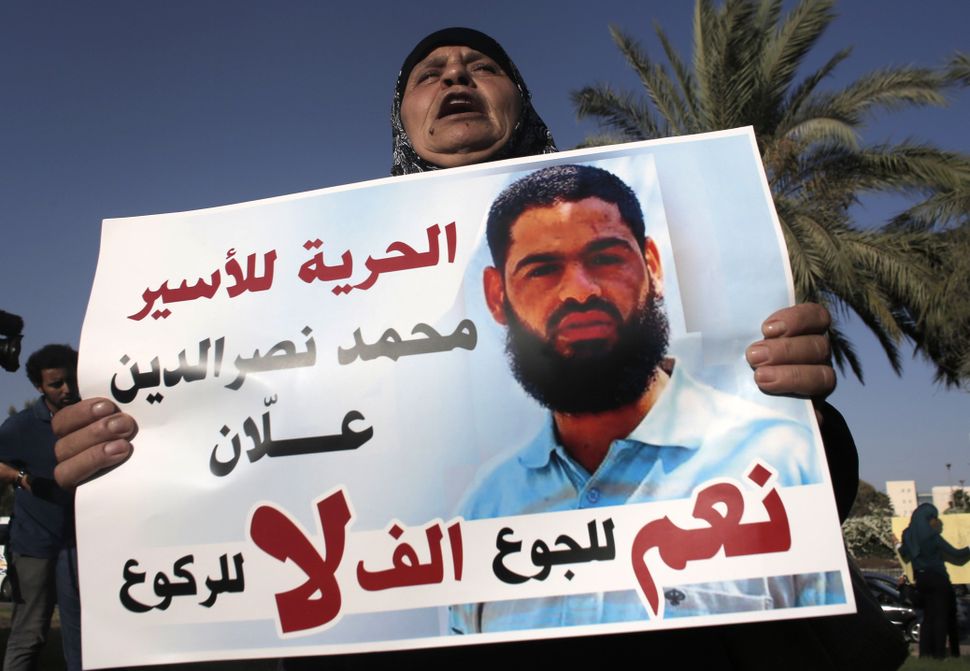 Mother of Mohammed Allaan holds a portrait of her son during a rally calling for his release. Image by AHMAD GHARABLI/AFP/Getty Images)

Doctors at an Israeli hospital refused to force feed a Palestinian prisoner who has been on a hunger strike for over 50 days.

Allaan, who has been held in administrative detention without charges since November, also is refusing any form of medical tests.

The International Committee of the Red Cross on Friday said in a statement that Allaan’s life is “at immediate risk,” and called on Israel to allow his family to visit him in the hospital.

ICRC delegates and medical staff have visited Allaan frequently in recent weeks to monitor both his health and his treatment by prison authorities.

The instructions to force feed Allan is the first test of a law passed by Knesset late last month allowing the force feeding of prisoners.

The Israeli Medical Association plans to challenge the law in the Supreme Court and has urged physicians not to comply with it.

On Sunday, about 180 Palestinian prisoners ended a hunger strike launched the day before to protest their prison conditions, saying that Israeli prison authorities had agreed to some of their demands. The Israel Prison Service has denied that a deal was struck.