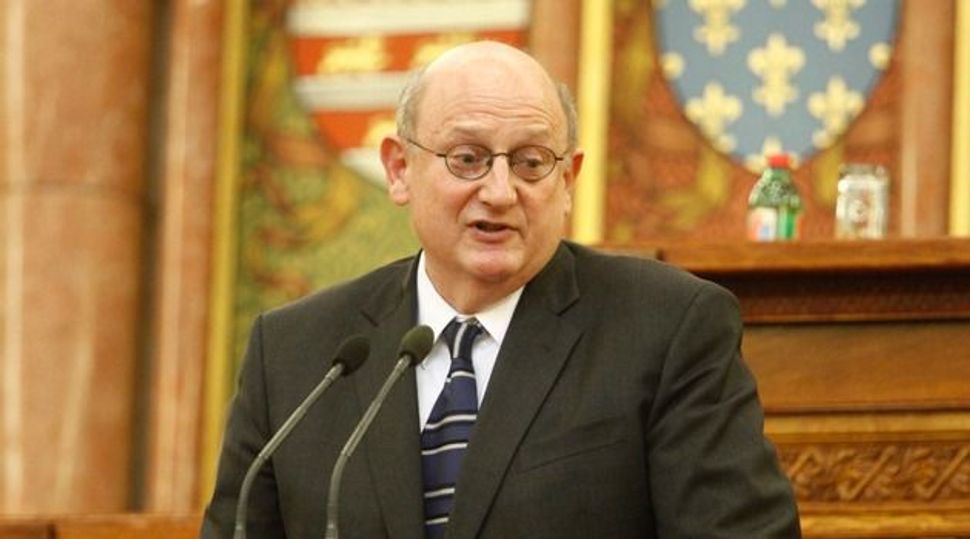 Bully Pulpit: Ira Forman, the State Department’s envoy on anti-Semitism, is speaking out on the spreading dispute over circumcision in Europe. Image by tom lantos institute

The top U.S. official combating anti-Semitism said he does not counsel any restrictions on speech in his interactions with foreign officials.

“In our interactions with other governments and civil society outside the United States we make very clear that we support freedom of speech and assembly and oppose criminalizing speech – even the most odious forms of anti-Semitism and other forms of hatred,” Ira Forman, the State Department’s special envoy to combat and monitor anti-Semitism, said in an Aug. 10 letter to Jewish Voice for Peace.

Forman was replying to the group after it said that the State Department definition of anti-Semitism, which is used to deal with foreign officials, inhibits free speech on U.S. campuses.

Jewish Voice for Peace, or JVP, a group critical of Israeli policies, had in May sent Forman and U.S. Secretary of State John Kerry a letter from its academic advisory council saying that the State Department definition of anti-Semitism was “vague” and “problematic” and had been “construed to silence any criticism of Israeli policies.”

The letter, signed by over 250 academics and backed by a petition signed by over 15,800 people, cited instances where terms related to Israel appearing in a 2010 State Department circular on anti-Semitism -“demonize,” “double standard,” and “delegitimize” – were used on some U.S. college campuses to define anti-Semitism, a definition the group said silences criticism of Israel.

Those terms appear in an addendum to the definition explaining, “What is anti-Semitism relative to Israel?”

In his reply, Forman notes that the addendum expands on and makes more specific the “demonize,” “double standard,” and “delegitimize” terms deemed vague by JVP.

He notes that the expanded explanation includes: “Denying the Jewish people the right of self-determination … applying double standards by requiring of [Israel] behavior not expected or demanded of any other democratic nation … drawing comparisons of contemporary Israeli policy to that of the Nazis” as examples of anti-Semitism. Forman also notes that the addendum says that “criticism of Israel similar to that leveled against any other country cannot be regarded as anti-Semitic.”

Forman says that the definition has been “useful” in his work. He quotes Samantha Power, the U.S. ambassador to the United Nations, speaking last year of anti-Semitic manifestations at protests of Israel’s actions during last summer’s Gaza war.

In a reply to Forman, JVP said it was “heartened” by Forman’s commitment to speech protections but argued that even the expanded definition of the terms is problematic.

“’Denying the Jewish people the right of self-determination…applying double standards by requiring of [Israel] a behavior not expected or demanded of any other democratic nation,’ are vague and overbroad, so much so that they can be construed to deem any criticism of the State of Israel as anti-Semitic,” the letter said.