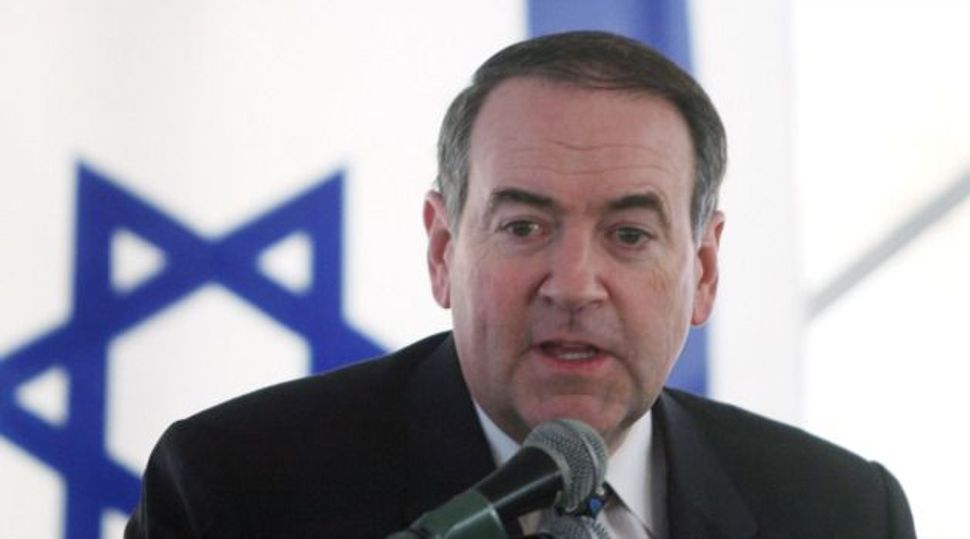 Republican presidential hopeful Mike Huckabee said Israel has as much right to the West Bank as the United States has to Manhattan.

Speaking at a press conference at Jerusalem’s Waldorf-Astoria Hotel on Wednesday, the former Arkansas governor, who gave a speech in the West Bank settlement Shiloh on Tuesday said, according to The Guardian: “I don’t see it as occupied, that makes it appear as if someone is illegally taking land. I don’t see it that way.”

He added: “In America, we have about a 400-year relationship to Manhattan. It would be as if I came and said we need to end our occupation of Manhattan. I’m pretty sure most Americans would find that laughable.”

Huckabee, an evangelical Christian who has visited Israel “dozens of times,” said his connection to Israel “is not so much political as it is visceral, personal.”

He also seemed to be unaware of Israel’s peace treaty with neighboring Jordan, stating that Jewish settlements on the West Bank are necessary as a buffer between Israel and its “sworn enemies.”

Huckabee also referred to Russia as the ‘Soviet Union.’

Asked Wednesday about his Shiloh appearance, which was sponsored by Simon Falic, an American Jewish supporter of Republican candidates and right-wing Israeli politicians, Huckabee said he “wasn’t in the least hesitant” to go there, describing it as “a place of great connection to the history of the Jewish people,” Bloomberg reported.

According to Bloomberg, the Falic family was the largest contributor to Israeli Prime Minister Benjamin Netanyahu’s latest election campaign.

Huckabee also said he is opposed to a two-state solution, saying “the notion of two governments working the same piece of land is unrealistic and unworkable.”

During his Israel visit, Huckabee has met with Prime Minister Benjamin Netanyahu and other government officials. Huckabee declined to say what was discussed other than their shared opposition to the Iran nuclear agreement. He also emphasized that “there was no implicit or explicit endorsement” from Netanyahu.

The prime minister “made it very clear he has no intention of getting in the middle of American politics,” Huckabee said.

Huckabee, who on Tuesday said he stands by his comment last month comparing the Iran deal to the Holocaust, said at the Jerusalem press conference that numerous Israelis during his visit had approached him about the “ovens” comment, saying they appreciated “the candor and the clarity.”