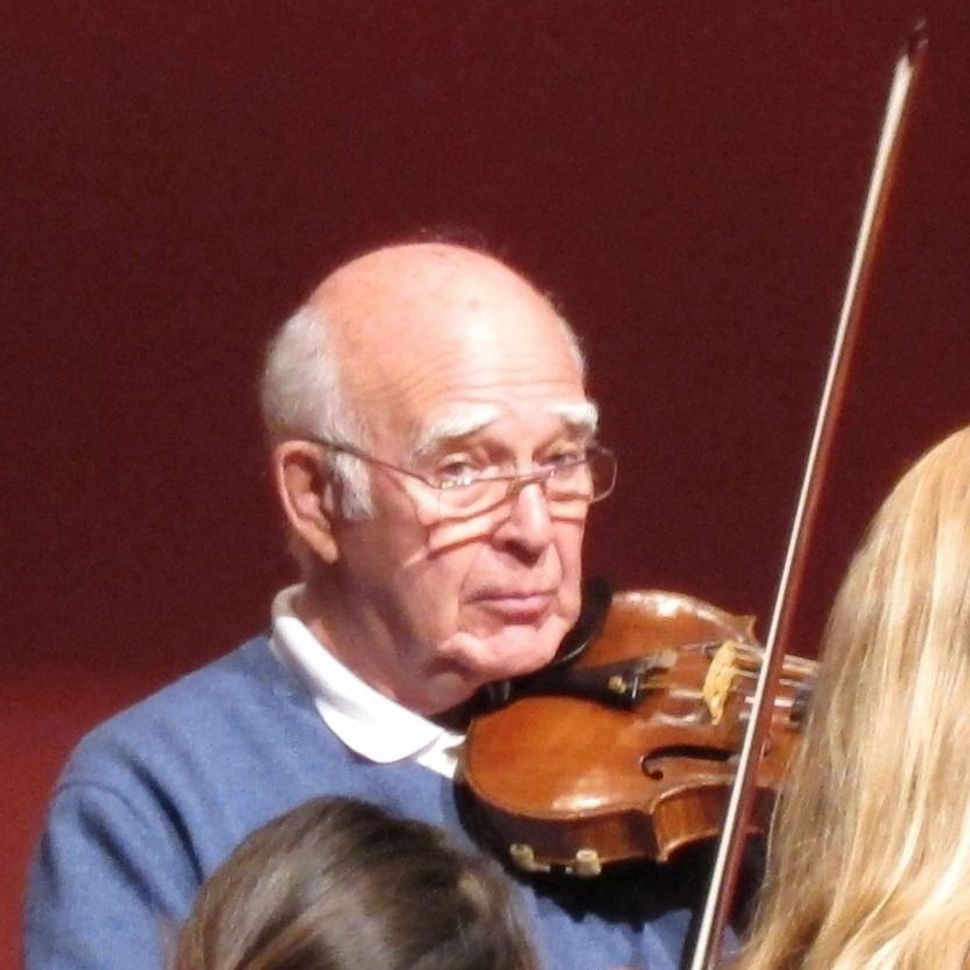 Joseph Silverstein, a renowned violinist, concertmaster and conductor, has died.

Silverman died Nov. 22 in Boston of complications from a heart attack. He was 83.

Well known for his decades-long career with the Boston Symphony Orchestra, where he served as concertmaster for 22 years and as its assistant conductor from 1971 to 1984, Silverstein also left his mark in the field of Jewish music, with two notable recordings for the Milken Jewish Music Archive.

Among his many recordings of Bach, Beethoven, and Mendelssohn, he was awarded the prestigious Naumburg Prize for his recording of the Bach Sonata in G Minor and Bartok Solo Violin Sonata.

When the Milken Archive was looking for a conductor on short notice for its recording of Joseph Achron’s little-known Violin Concerto No. 1, it called on Silverstein, by then also an acclaimed conductor and music director of the Utah Symphony Orchestra, according to Neil Levin, the Milken’s artistic director. Written by Achron, a Russian-Jewish emigre to the U.S. in 1925, and dedicated to his friend and mentor Jascha Haifetz, the piece is the first-known concerto based on Jewish biblical cantillation.

Silverstein’s masterful leading of that recording, featuring the award-winning soloist Elmar Oliveira, brought the concerto back from obscurity. It is now regularly performed by soloists, often as an encore, said Levin, professor of music at the Jewish Theological Seminary.

At the same time, Silverstein conducted a second recording for Milken, of Stefan Wolpe’s “The Man from Midian,” originally composed as a ballet score based on the life of Moses. Silverstein’s recording brought back to life a “significant piece of theatrical music work” by an important, if lesser known, 20th-century German-Jewish composer, according to Paul Schwendener, the Milken’s repertoire consultant. Wolpe, who fled Nazi Germany, lived for a time in prestate Palestine and eventually settled in the United States.

Levin recalled Silverstein telling him after the recording sessions, held in Berlin, that it was an honor to contribute something to his Jewish heritage, he told JTA.

Born in Detroit, Silverstein was the son of two Jewish musicians. His father, Bernard, was a public school music teacher and was the young Silverstein’s first violin teacher.

A revered teacher himself, Silverstein held numerous appointments including with the Tanglewood Music Center, the England Conservatory of Music, Yale University and the Curtis Institute of Music, among others. Many of his former students fill the violin chairs at orchestras throughout the country, with many at the Boston Symphony Orchestra.

Daniel Stepner, first violinist of the Lydian String Quarter and a music professor at Brandeis University, knew Silverstein and was an admirer. He took a few lessons from Silverstein and played with him in concerts several times.

“He was sort of a model for me as I was growing up as a violinist,” Stepner told JTA in an email. “He was a wonderful teacher and a superb violinist.”