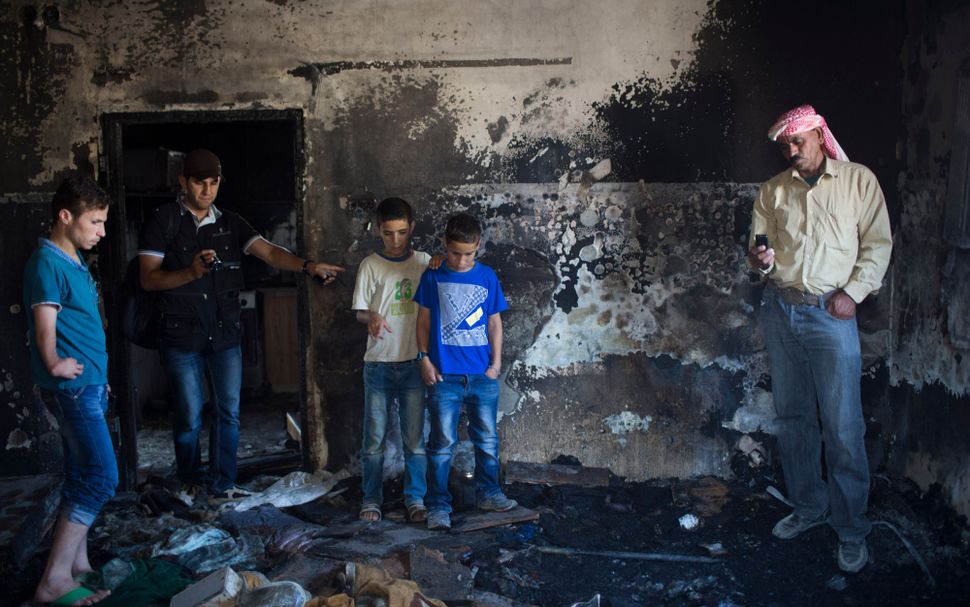 For more than two months, Israel has been battling a wave of deadly attacks by Palestinians targeting Israelis. At the same time, and in a reflection of the complications of the region, it is trying to rein in violent, far-right Jewish groups intent on sowing discord with Muslims and Christians.

Last week, Israeli police announced a breakthrough in a case from July, saying members of a “Jewish terror group” had been arrested over the torching of a Palestinian home in the West Bank that killed 18-month-old Ali Dawabsheh and his parents. Ali’s four-year-old brother remains in hospital.

The Shin Bet, Israel’s domestic security agency, has a unit focused on Jewish groups and, in the days before the arrests, stepped up efforts to detain suspects linked to the attack.

That followed criticism from the United Nations and others over the pace of the inquiry and signs the arson – and lack of arrests – was fueling Palestinian anger and a factor in the past two months of violence. Nineteen Israelis and a U.S. citizen have been killed in stabbings, shootings and car-rammings.

While radical Jewish groups remain an extreme fringe, they have a history dating back to the 1970s and 80s. Israeli security officials say such groups have carried out around 40 hate crimes against churches, mosques and monasteries in Israel and the West Bank since 2009, but have not provided comparative figures from before that.

Israel analysts, including Sara Yael Hirschhorn of Oxford University, say the number of such crimes has been rising steadily. It comes at time of growing frustration among radical settlers that the government is not doing enough to expand its hold over the West Bank – which Palestinians want as part of a future state – and build more homes for Jews.

Members of far-right groups have also become more open in public about their views. Some wear black hooded sweatshirts with the image of a pirate wearing a Jewish skullcap and ultra-Orthodox curls.

Days before the Dawabsheh arrests, a member of vocal anti-Arab group Lehava, was sentenced to three years in jail for his part in an arson attack on a Jewish-Arab school in Jerusalem last November, when “Death to Arabs” was spray-painted on walls.

Two other members of Lehava – which advocates the complete separation of Jews from non-Jews, especially Muslims – were jailed in July for their part in the same incident.

And Israeli police have charged two suspects, described as followers of an “extremist Jewish ideology,” for torching a church near the Sea of Galilee in June, when a verse from a Hebrew prayer denouncing false gods was scrawled on a wall.

In a sign of how prominent some fringe groups have become, the leader of Lehava, Bentzi Gopstein, addressed a committee of the Israeli parliament last month during a hearing on whether to ban the group. And last week he led a public protest against a Christmas-tree lighting in Jerusalem, joining around 20 Lehava supporters in denouncing it as an attempt to convert Jews.

Police have not named those arrested over the Dawabsheh attack or said how many are in custody. Using laws normally applied to Palestinian militant suspects, they are being held in preventative detention, which means they can be detained without charge for up to six months before a judicial review.

But in August police confirmed they were holding Meir Ettinger, the 24-year-old grandson of Meir Kahane, a radical U.S.-born rabbi who founded the Jewish Defense League and the Kach party, which Israel outlawed as racist in 1988.

Ettinger is a well-known figure in Israel, among a group of ultra-nationalist settlers frequently referred to as the Hilltop Youth because of their age and the fact many grew up in illegal outposts on the hills of the Israeli-occupied West Bank.

Members of the group follow rabbis who apply a very strict interpretation of the Torah, including a longing for the end of Israel’s democracy and the return of a Jewish king.

Hirschhorn, a specialist in the Hilltop Youth, estimates there may be no more than 200 members of the group at any time, but says they are growing in influence and in their brazenness.

“They have declared themselves to be anarchists who are looking to destroy or overthrow the Israeli government,” she said, pinpointing their emergence to the mid-2000s, even if they have progenitors in the Jewish Underground of the 1980s.

“They are not real thinkers, even if they are portrayed that way,” she said. “They are the second and third generation of settler families,” she added, with many of them having U.S. roots.

The Hilltop Youth are suspected of involvement in so-called Price Tag attacks, in which mosques, Palestinian homes and sometimes Israeli targets are vandalized and spray-painted to “extract a price” for opposition to Israel’s settlements.

The links, if there are any, between Lehava, the Hilltop Youth, Price Tag and other far-right groups are not clear. The suspects arrested for the Dawabsheh attack are doing everything possible to ensure no light is shed on their activities.

On Friday, Israel’s public security minister, Gilad Erdan, said the police were still gathering evidence and it was too early to bring the suspects to trial, describing them as “very, very difficult” to crack under interrogation.

Israeli newspapers have reported that the suspects will not speak, instead chanting Hebrew psalms relentlessly.

“They are people who really live in the hills, disconnected from their close families,” Erdan said. “We are doing everything so that we might have evidence that would allow prosecution and indictments,” he said. (Reuters)