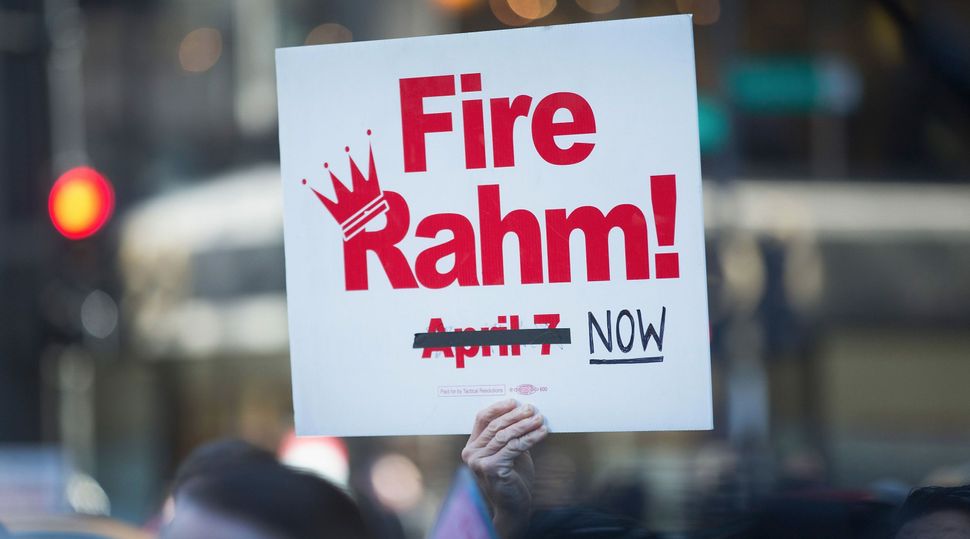 A protester holds up an anti-Rahm sign in 2015. Image by Getty Images

CHICAGO — Protests continued in Chicago on Thursday starting with a “die-in” by medical students, a day after embattled Mayor Rahm Emanuel emotionally apologized for the 2014 police shooting of a 17-year-old black teen.

Dozens of students of different races laid down in front of City Hall for 16 minutes at the start of the work day, some holding signs reading “Do No Harm.” The protest, broadcast by local media, called for Emanuel’s resignation, as did hundreds of demonstrators who shut down city streets on Wednesday.

The protesters chose 16 minutes to symbolize the 16 times white police officer Jason Van Dyke shot Laquan McDonald in 2014, according to WGN-TV. Release of police video of the shooting and a murder charge against Van Dyke came more than a year after McDonald’s death, and the delay prompted more than two weeks of protests in the nation’s third-largest city.

Another protest was planned for evening rush hour downtown.

High-profile killings of black men in U.S. cities have stirred a national debate about the use of force by police, particularly against racial minorities.

Emanuel and Cook County State’s Attorney Anita Alvarez have faced sharp criticism over their handling of police shootings. The city made a $5 million settlement to McDonald’s family after Emanuel’s re-election in April, and critics have complained that it took too long to charge Van Dyke.

Emanuel, the city’s first Jewish mayor, has recently taken steps to reform the police department, including setting up a task force to review police accountability and firing the police superintendent.

But outrage has mounted over the McDonald shooting and police misconduct overall. Two black state representatives have introduced a bill that would allow the mayor to be recalled.

“We can’t continue to have a city that’s in turmoil like this,” said Rep. La Shawn Ford, who like Emanuel is a Democrat and sponsored the bill. Ford told Reuters the bill, which would not be considered until mid-January, would allow the community to prove their rhetoric is serious.

Lorenzo Davis, former supervising investigator of the city’s Independent Police Review Authority, told CNN on Thursday the mayor should resign because he is “a bad judge of character.”

Davis, who has said he was fired after refusing to change findings that showed police were at fault, said Emanuel made bad hiring decisions, pointing to former Police Superintendent Garry McCarthy and former Chicago Public Schools CEO Barbara Byrd-Bennett, who pleaded guilty in October to bribery charges.