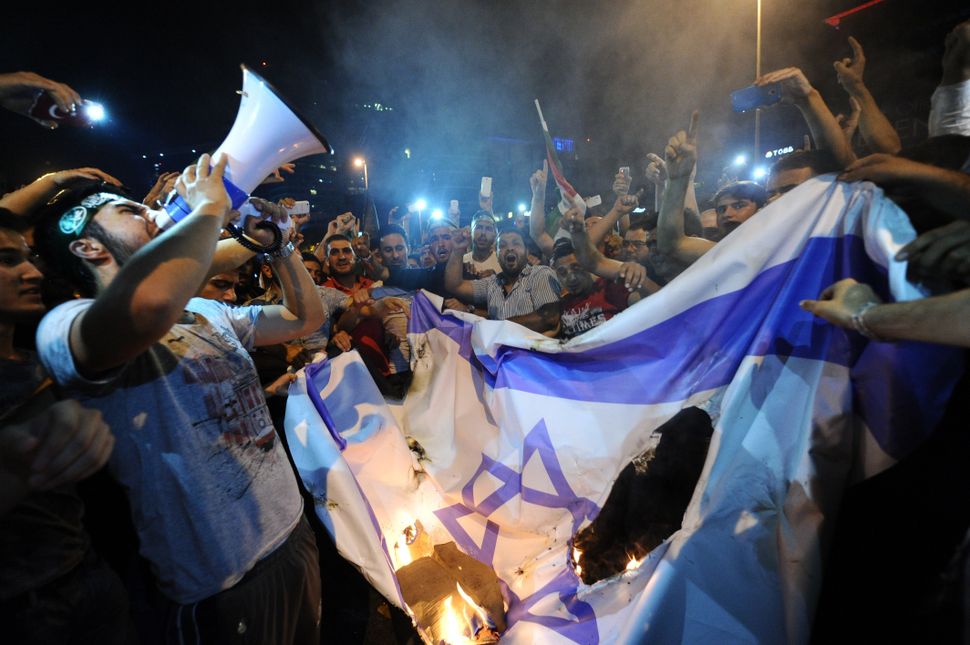 Turkish protestors burn Israeli flag during demonstration against the Gaza War in 2014. Image by Getty Images

Turkey sees no normalization in ties with Israel unless its conditions for ending the Gaza blockade and compensation for the deaths of 10 Turkish activists in 2010 are met, a presidential spokesman said on Monday.

Relations between Turkey and Israel soured when the activists were killed in a raid by Israeli commandos on a Turkish boat, the Mavi Marmara, which was trying to breach the blockade.

Expectations of a breakthrough were intensified after senior officials met this month to try to repair ties. The talks have raised hopes of progress in negotiations to import Israeli natural gas, particularly since Turkey’s relationship with major energy producer Russia has worsened over Syria.

But comments from Presidential spokesman Ibrahim Kalin suggest Turkey may be trying to play tough in the negotiations.

“Turkey – Israel relations will not normalize until Israel realizes the three conditions. We have not given up on these,” Kalin said at a regular news conference.

Ankara wants an apology for the Mavi Marmara killings, and compensation for families. It also wants Israel to end the blockade of Palestinians living in Gaza, seen as a sticking point in the talks.

“Turkey will continue to play its role until a two-state solution is reached, and the Palestinian people have their own state. There cannot be permanent peace in the region until the Palestinian problem is solved,” Kalin told reporters in Ankara.

Asked to respond to the remarks from Ankara, an Israeli official declined to discuss Gaza policy, saying only: “We will not be conducting negotiations through the media.”

Israeli officials have previously described the blockade on Gaza, which is supported by neighboring Egypt, as a necessary means of preventing arms smuggling by Palestinian militants.

Israel allows commercial goods into Gaza through its land crossings and said that nearly 128,000 tons of material, or 3,750 truckloads, entered the enclave last week.